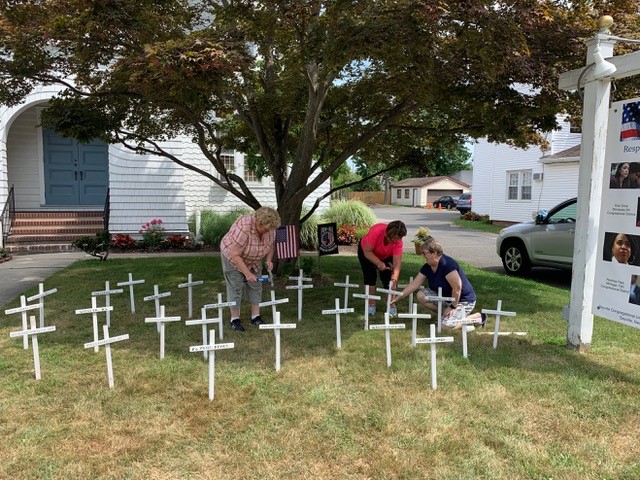 Members of Sayville (N.Y.) Congregational United Church of Christ planted crosses on the lawn of their Long Island church Tuesday, Aug. 6, as a memorial to lives lost in mass shootings Aug. 3 in El Paso, Tex., and Aug. 4 in Dayton, Ohio. The church sent out statement titled “A Call to National Sanity,” on Wednesday, Aug. 7, along with this two-minute video narrated by pastor, the Rev. Ray Bagnuolo. Here is the message from the congregation.

Sayville Congregational United Church of Christ refuses to accept that we are powerless in the face of continued violence and insanity with regard to weapons and accessories intended for war now regularly used against our families, friends, neighbors, communities and nation. For years, this congregation has continued to speak out and take public action against the sales of these weapons and the violence they cause.

As a congregation, we resist the numbing of our minds and hearts that results from the sheer impact of so many mass shootings. We speak out as a community of faith, believing in the love, respect and dignity we have been given to share with one another. We will continue to expose the slow conflation of murder and death in our nation, robbing us of the sacred natural passage associated with human life and replacing it with fear and mistrust of the other. We will not cower nor be forced into isolation or reactionary/transactional responses that diminish our lives together and our role in caring for one another.

Our congregation has again placed wooden crosses on our lawn to bring attention to the lives most recently lost in El Paso, Tex., and Dayton, Ohio. Further, we believe there is no faith tradition, no concept of God … that call[s] any of us to lift weapons against one another in the ways we have witnessed too many times.

Therefore, we call for the full and complete ban of weapons of war and their accessories until the underlying conditions that cause these senseless murders across our country have been resolved.

We ask for continued prayers to encourage, strengthen and inspire our nation in ways that end the insanity of gun violence in our communities.

We pray more for all those who awaken absent their loved ones because of the delay in ending this insanity.