Commentary: In the Face of Water Cannons, a Thanksgiving Appeal 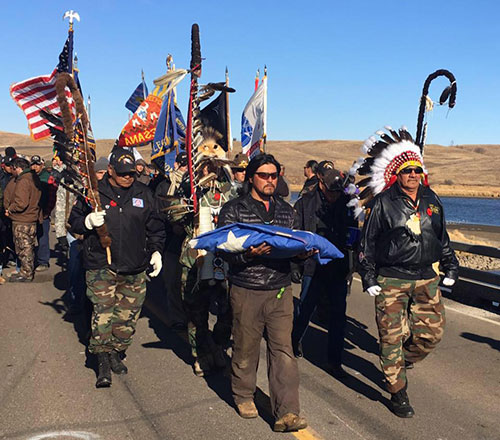 by Traci Blackmon and Brooks Berndt

As a part of our nation's civil religion, Thanksgiving comes with its own set of feel-good mythologies and symbols. Heartwarming, romantic images of Native Americans and Europeans sharing a meal together, however, not only negate a violent history, they also negate a current reality that is far from appetizing. For many of us, that unappetizing reality confronted us Sunday night and Monday morning. On Facebook and on Twitter, we encountered graphic images and news reports of law enforcement officers deploying water cannons, rubber bullets, tear gas, mace, and concussion grenades against an unarmed gathering of water protectors, those who have been defending the sacred lands and waters of the Standing Rock Sioux by opposing the construction of the Dakota Access Pipeline in North Dakota.

Initial reports noted that nearly 200 people were injured, including twelve hospitalized for head injuries, multiple cases of hypothermia, and at least one cardiac arrest. The sad irony is that the group had assembled for the purpose of enabling others to receive timely medical attention. For several weeks, two burned-out trucks had formed a barricade that blocked access to the quickest route for ambulances to medical centers.  The goal of those gathered was to remove these impediments to emergency vehicles.

That this event happened so close to Thanksgiving prompted a telling comment from Frank Archambault of the Standing Rock Sioux. In speaking to The Guardian, he noted, "In my family we never celebrated Thanksgiving. It was always a day of mourning for the day that genocide began on this continent. This all just goes to prove what we're talking about."

For each of us, Archambault's comment provokes the question, "What will I do for Thanksgiving this year?" Easy sentiments of Hallmark-style gratitude seem far from appropriate. Yet, there is a relevant and important feeling of gratitude that arises in this moment, and that is for the water protectors who have put their bodies on the line for the sake of justice.  Gratitude by itself might not be much, but it is something that can provoke an important response: giving. For this reason, both of us have decided to make financial contributions in support of the water protectors this Thanksgiving.

We invite others to join with us in this act as well. Winter is fast approaching, and as we both personally witnessed in a recent visit to Standing Rock, there is a dire need in the water protector camps to adequately prepare for it. The coming snows of North Dakota are a real threat to those who have led this movement which has inspired people around the globe. As part of our ongoing solidarity with Standing Rock, Justice and Witness Ministries of the United Church of Christ has made addressing the winterization needs of the camp a top priority. Because needs are always evolving, money is the best gift. A blanket might be needed one day, but not the next.  This is a moment when those who can afford to offer financial support can make a tangible difference. Together, let us give with a spirit of thanksgiving.