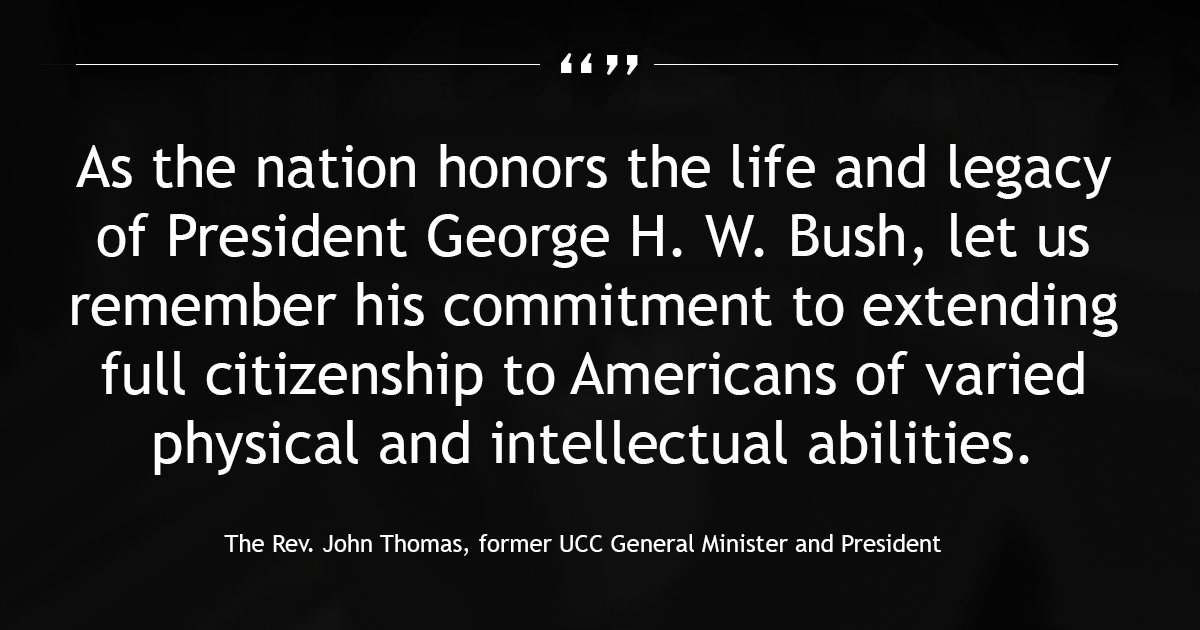 As the United States mourns former President George H.W. Bush during his state funeral, the Rev. John Thomas shares a UCC tie to one of Bush’s greatest accomplishments.

Is your grandmother able to ride the city bus to see her doctor and go to church on Sundays because it has a lift allowing her to board with her wheelchair? Is your brother enjoying a rewarding career because his employer provided a special computer screen enhancing his ability to see? Is your niece able to participate in the school orchestra because there is an elevator she can use with her crutches and braces to reach the second-floor music room? Are you able to communicate over the telephone in spite of your hearing impairment?

If you answer yes to any of these questions, you probably are grateful for the Americans with Disabilities Act, signed into law in 1990 by President George H. W. Bush. This Act is considered by many as a signature achievement of the Bush administration, literally transforming the landscape for tens of millions of Americans and changing our understanding of disability from one of illness and limitation to one of opportunity and access. Lex Frieden, the then Director of the National Council on Disability and a principle architect of the Act, said, “President Bush understood that he would be remembered forever as the president who made people with disability a part of their community, the president who changed the face of America, and was very proud of that. He considered it among some of his greatest accomplishments.”

Present at the signing ceremony on the White House lawn was the Rev. Harold H. Wilke, a United Church of Christ minister, born without arms, who served for many years as a pastor, chaplain, and as the first executive of the Council for Church and Ministry of the new United Church of Christ. In 1975, Wilke founded The Healing Community, an organization to assist churches in becoming accessible to their members with disabilities. In 1977 he chaired the UCC’s Advisory Committee on the Church and the Handicapped. Wilke was also a founding director of the National Organization on Disability and instrumental in the development of its Religion and Disability program.

When I was a boy Harold came to speak at our church and my parents hosted him for dinner. I can still remember watching him eat his meal with utensils held in his feet as he shared his story and his ministry with my family. As you might imagine, it made a lasting impression and helped shape my understanding of the gifts available to the church and society from persons with disabilities. At the signing ceremony, Rev. Wilke was asked to offer a prayer. Here is what he said:

“Let my people go," you did decree, O God, demanding that all your children be freed from the bonds of slavery. Today we celebrate the breaking of the chains which have held back millions of Americans with disabilities. Today we celebrate the granting to them of full citizenship and access to the promised land of work, service, and community. Bless this gathering, this joyous celebration. Bless our president as he signs the Americans with Disabilities Act, and strengthen our resolve as we take up the task, knowing that our work has just begun. Bless the American people and move them to discard those old beliefs and attitudes that limit and diminish those among us with disabilities. Our prayer is in your name, O God, whom we call by many names: God and father of our Lord Jesus Christ, Allah the compassionate and merciful one, the God of Abraham, Isaac, and Jacob and of Rebekah and Sarah and Ruth, the ground of all being, the infinite source of love and light. Amen.”

Today as the nation honors the life and legacy of President George H. W. Bush, let us remember his commitment to extending full citizenship to Americans of varied physical and intellectual abilities. And let us celebrate that our church, through the ministry of Harold Wilke and so many others, has been inextricably linked to this effort.

The Rev. John H. Thomas served as General Minister and President of the United Church of Christ from 1999-2009.