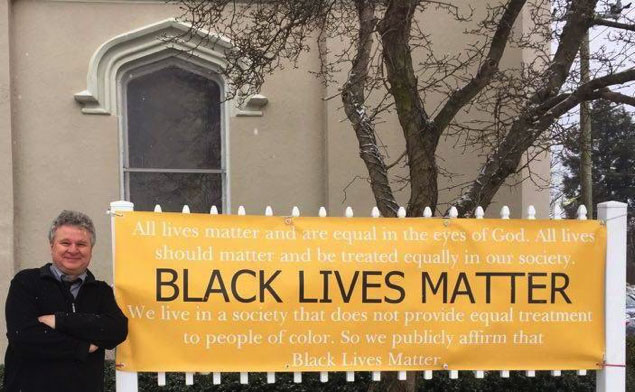 When our church banner proclaiming Black Lives Matter disappeared, I didn't expect the officer responding to our report would indict the civil rights movement.

Sadly, on or about February 12, 2016, someone trespassed onto our consecrated church grounds in Mt. Vernon, Ohio and desecrated the banner hanging on our fence by stealing it.

The orange banner had these Godly words in white lettering: "All lives matter and are equal in the eyes of God. All lives should matter and be treated equally in our society. We live in a society that does not provide equal treatment to people of color. So we publicly affirm that Black Lives Matter." In the middle of those words in bigger black lettering the Godly words "Black Lives Matter" were repeated.

When the church staff called me at home to tell me the banner was taken, I asked them to notify the police to report the crime. Shortly thereafter, I received a call from the responding officer who wanted to meet with me.

The officer was polite and appeared to me compassionate, thoughtful and articulate. But what he wanted me to know was very disturbing. He advised me that "Black Lives Matter" was the name of a movement officially connected to terrorism by the government. The officer indicated that the terrorist nature of the movement was probably why people in town would be upset about the sign and act out to take it down.

Since I had never heard of that type of connection, I asked the officer what agency had listed "Black Lives Matter" as a terrorist group or as having terrorist connections. After a bit of probing, he used his cell phone to research a website on the BLM movement and as he scrolled through it, I pointed out the word terrorism or terrorist was nowhere to be found. The officer then apologized for claiming it was a listed terrorist movement, but added he thought Homeland Security (or NSA I am not sure which) was considering listing it as a terrorist organization.

In fairness, I understood the officer to note in the course of our conversation that he agreed with the message of our banner and that he was not a racist, and opposed racism.

What was disturbing to me was that a civil rights movement that our church and the denomination are involved in would be considered a terrorist movement by the local police. It is, of course, highly inappropriate and offensive to have labeled it as such.

We were victims of a crime (or crimes), not terrorists. We were being -- and are-- non-violent civil rights advocates, the very opposite of terrorists. We are a church with a 181-year-history of caring deeply about social justice issues because we believe God cares about them, and this includes the civil rights movement that claims Black Lives Matter. Our church plans to continue our involvement in Black Lives Matter civil rights matters. This means there may be more public displays by us in Mount Vernon, which sadly may also mean further unlawful actions against us or our place of worship to which the police may need to respond.

While  I am grateful for the police department and the officer who responded, we need to pray and have work to do so that law enforcement agencies do not suggest that our God-soaked civil rights efforts to ensure Black Lives Matter are connected to terrorism. That's just plain wrong.

The Rev. Scott Elliott is the pastor of First Congregational United Church of Christ in Mount Vernon, Ohio.