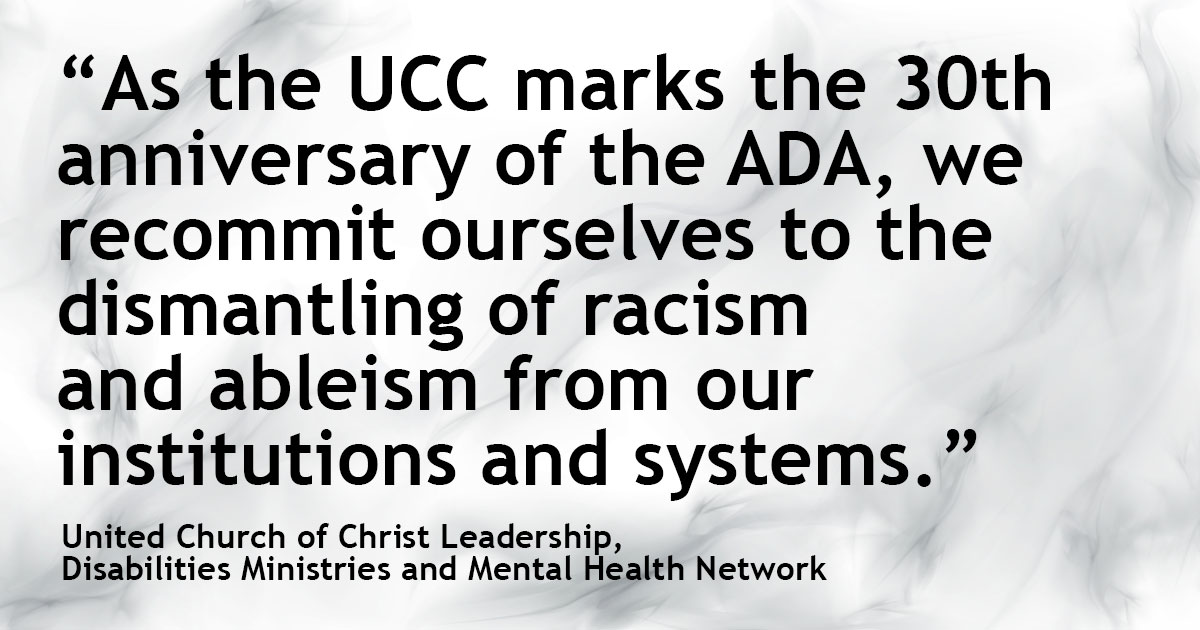 Thirty years ago, on July 26, 1990, our nation began a long-overdue journey toward justice by signing into law the Americans with Disabilities Act (ADA), guaranteeing legal protection from discrimination on the basis of disability (mental and physical) for approximately 20 percent of our country’s population. The ADA is considered the nation’s most important civil rights law concerning disabilities. It defines disability, provides housing and employment protection, and ensures access to post-secondary education for People with Disabilities (PWD), among other things. The United Church of Christ continues to advocate for the strengthening and protection of the ADA.

We acknowledge with deep gratitude all who fought for equity in access to opportunities, goods, services, and communications for PWD. We celebrate the witness, ministry, and legacy of the Rev. Dr. Harold Wilke, a UCC minister, who helped lead the effort for disability rights. The movement for disabilities justice touches every aspect of our church and society, benefiting everyone when the wisdom, gifts and witness of PWD are included.

The ADA began the effort of dismantling barriers individuals with disabilities faced daily. Over time common physical barriers such as narrow doors, small bathroom stalls and buildings with stairs became accessible to wheelchairs. In many public spaces Braille, American Sign Language, and closed captioning services are available. Flexible work schedules, modified work environments, and technologies have empowered people with invisible disabilities (neurodevelopmental differences such as dyslexia and mental health challenges) to share their gifts, knowledge, and skills. These structural changes have resulted in additional strides in technological access as well. The UCC recently added closed captioning services to our online offerings as we seek to live into being an Accessible to All (A2A) church in the national setting. We have more work to do.

As the world moves toward justice for PWD, the church must not be left behind. Accommodations must go far beyond widened doorways and designated parking to include inclusive language in our preaching, teaching and written documents, adjustments to make our websites accessible, and measures to include people with sensory and invisible disabilities that often go unnoticed. Our attitudes and stigma towards disabilities must change as well.

Dr. Wilke understood the intersection between disabilities justice and other movements for justice, including racial justice. As we lift up the work of disabilities justice, we cry out along with others at the everyday injustices experienced by PWD, especially Black PWD. We join with others in extending our sympathy and condolences to the family of Michael Hickson, a husband and father of five who was a Black man living with quadriplegia, and who died on June 11, 2020, from complications caused by COVID-19.

We take seriously the cries of injustice from Mr. Hickson’s wife, who holds that his death was avoidable and that he died because of discrimination against his race and disability.

On behalf of the UCC, the UCC Disabilities Ministries proclaims that Black lives matter, and affirms the rights and dignity of PWD.

Though much about this case remains unclear, what has happened has only magnified the disparities that many who are Black and disabled face in health care and society at large. The presence of bias within the world’s systems makes it difficult to simply accept what one is told may be best.

As people of faith, we believe it is our duty to boldly reject the notion that life-saving measures are “futile” in the face of one’s disability. It is our conviction that all life is of sacred worth. We commit ourselves to the work of reform as it relates to procedures, processes, and systems which cause loved ones to question whether someone they care for has received the best care possible in light of their race and abilities.

As the United Church of Christ marks the 30th  anniversary of the ADA, we celebrate that we have come a long way and we confess that we have a long way to go. We recommit ourselves to the dismantling of racism and ableism from our institutions and systems. We commit ourselves anew to continuing to shift paradigms toward greater accessibility. Our goal is not only accommodation, but also integration of the modalities necessary to make certain everyone knows PWD are not only welcome in the United Church of Christ, but that PWD belong and are an important part of the Body of Christ.