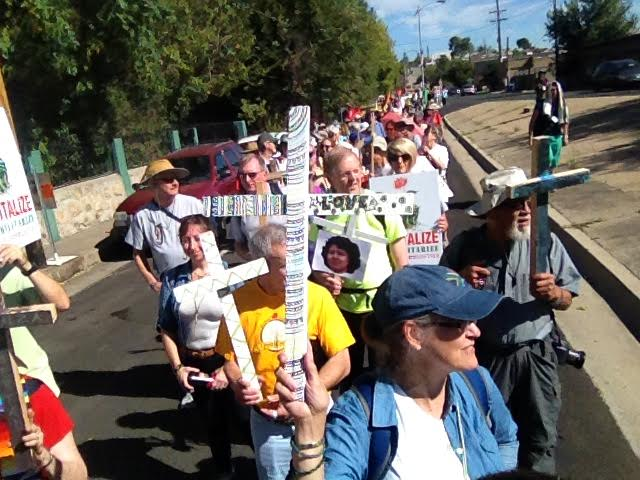 This story has been difficult to write because it doesn’t yet have an ending, and in all likelihood, it will not be a happy one.

Two weeks ago Juan, a friend of several people in the United Church of Santa Fe (including me), left his house to go to work at a job site. He stopped to get gas and a few minutes later, he was picked up by Immigration and Customs Enforcement (ICE) and transported to a detention center in El Paso, Texas, three hundred miles away. Because his cell phone was confiscated, he had no way of contacting his wife and children for several days.

Although the city of Santa Fe has declared itself a Sanctuary City, Juan and his family live in Santa Fe County because it’s affordable. It’s also less safe from ICE pickups.

Juan has lived and worked in New Mexico for twenty-five years. Originally from Mexico, he crossed the U.S. border as a twenty-something to find work. And work he did, first as a day laborer and then as a handyman who taught himself to install drywall and do stucco repair. He met and married his wife Lucia, who was a U.S. resident. Together they raised three children and bought a fixer-upper house in Santa Fe. Both daughters earned academic scholarships at the University of New Mexico. The older one is applying for medical school. Juan’s son was to leave soon for the University of Wisconsin.

Because Juan initially came without papers, he worked with an immigration lawyer several years ago, who assured Juan everything was in order for him to stay. Thirty thousand dollars later, the lawyer skipped town, leaving Juan’s immigration status in limbo. A few years back, several friends helped Juan find another lawyer. Again, he thought things were settled.

Juan’s English is about as good as my Spanish, which means communication, especially around legal issues, can be difficult. Moreover, U.S. immigration laws and practices are confusing at best, and it’s unclear what prompted ICE’s action. What is clear is that a man who has worked hard all his adult life to care for his family and be a solid, contributing member of his adopted country, now sits in a cell three hundred miles away, awaiting likely deportation. What’s also clear is that one more family is being split apart by our draconian immigration policies and practices.

There is much more to be said about immigration and border issues, particularly since our most of our Southwest Conference congregations are composed primarily of persons who have also migrated here from other parts of the U.S. But that’s a conversation for another day.

I would have included a picture of Juan and his family with this article, but we don’t want to put them in further jeopardy. Instead, here is a picture of an ecumenical “Witness at the Border” two years ago. As UCC members gather in Arizona August 26-30 for this month’s “Faithful Witness at the Border,” please keep in prayer the people of New Mexico and Chihuahua, along with other states on both sides of the border. And please pray for Juan and his family.

The Rev. Talitha Arnold is Senior Pastor of the United Church of Santa Fe, a UCC congregation in Santa Fe, New Mexico.