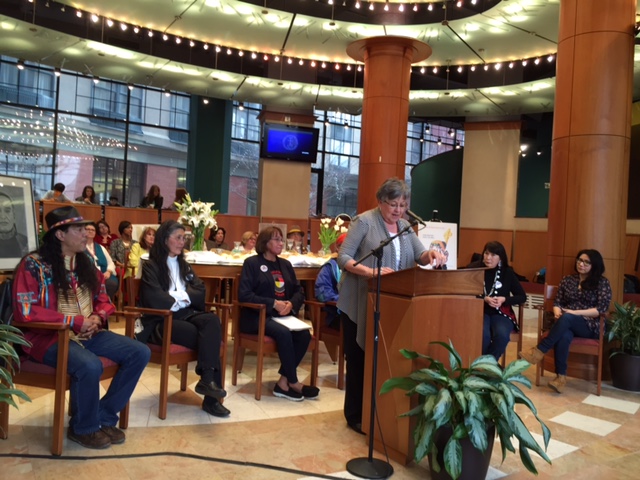 It has been 100 years since Cleveland's major league baseball team became the Indians, with Chief Wahoo as the team logo. And for advocates of the United Church of Christ and Native American groups throughout the country, 100 years is long enough. As the team starts the 2015 season at home, a grassroots coalition will host a series of events in Cleveland calling for a change of the name and image that many say are racially offensive to members of the Native American community.

"The team name and logo have to go," said Ferne Clements, a former UCC national staff member who has been staging these demonstrations since 1991. "No ifs, ands or buts about it. They have to go."

The weekend of action kicked off with a news conference at the UCC's national headquarters in downtown Cleveland on Thursday, April 9. Speakers included the Rev. Linda Jaramillo, UCC national officer and executive minister of Justice and Witness Ministries; Charlene Teters, a founding board member of the National Coalition of Racism in Sports and the Media and member of the Spokane tribe; Clyde Bellecourt, director of the Peacemaker Center for Indian Youth and member of the Ojibwe tribe; and David Narcomey, an activist, business owner, former regional director of the North Florida chapter of the American Indian Movement and member of the Seminole tribe, among others.

"For decades, we have spoken out in opposition to the usage of negative stereotypes, and been active in protests against such misuse," said Jaramillo. "We will continue to journey in solidarity with our brothers and sisters until this part of our body of humanity is honored and respected." 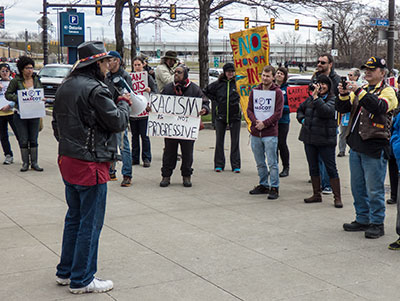 "While U.S. race relations have changed and this denigrating language is no longer acceptable to Americans, the stereotypical notions and ideas have been embedded in U.S. culture for hundreds of years," Jaramillo said. "Such lasting impact means that the use of an athletic team name like 'Indians' continues to prime prejudices and bias toward blatant disregard of our common humanity and perpetuation of discrimination."

In 1991, the General Synod of the UCC passed a resolution calling upon its members to work for the elimination of negative stereotyping of Native Americans and the use of Native American imagery for sports team mascots, names and logos. Delegates at General Synod 2015, taking place June 26-30 in Cleveland, will vote on a resolution that calls upon the National Football League's Washington Redskins team to change its name, mascot, and affiliated imagery. Justice and Witness Ministries and the Council of American Indian Ministries will also circulate a petition calling for a change of the Cleveland team's name and mascot, which will be delivered to the team and to the City of Cleveland.

"There can't be a team name or logo that depicts a racial people anywhere in this country," Clements said. "Cleveland needs to be the leader to get rid of the racist names and logos.

"Cleveland calls itself an all-inclusive city – I don't know what fantasy world they live in," she continued. "The city can't have a racist team name and logo and call itself all inclusive."

While the Cleveland team's owner, Paul Dolan, has made it clear that there are no plans to change the team's name or retire the Chief Wahoo logo, that does not deter Clements from organizing the annual protest. In fact, it just adds more fuel to her fire.

"It just makes us want to gather more," she said. "And get more people out there educated."