The United States is in danger of abandoning two long-held commitments – welcoming the stranger and struggling for civil rights – and replacing them with fears of immigrants and people of color. The church should be a leader in preventing that. 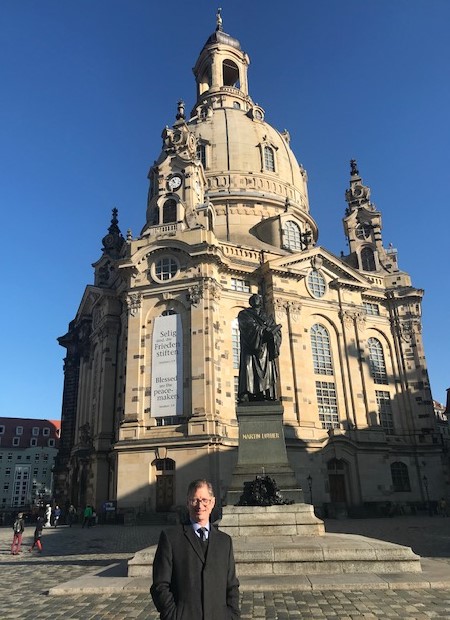 Those were the central messages from the Rev. John Dorhauer, general minister and president of the United Church of Christ, in recent speeches to two partner-church audiences in Germany.

Dorhauer spoke Nov. 7 in Dortmund to a gathering of some 50 staff and pastors at the Protestant Church of Westphalia’s Office of Mission, Ecumenism and Global Responsibility, and Nov. 8 in Dresden to some 200 church leaders at a Union of Evangelical Churches Synod meeting. The guest speeches were part of the German churches’ effort to reckon with a fear of immigrants and a rise in neo-Nazism in their own country.

Positive narratives in danger of disappearing

“The America I grew up believing in and falling in love with is disappearing,” Dorhauer said. “This is less about Donald Trump than it is about a re-emerging racist American population.” He went on to express concerns that the racism and homophobia that America has worked for decades to rid itself of has been growing since 2016. Positive narratives – for example, that racism should be overcome with civil rights and that welcoming immigrants is part of America’s strength – are in danger of receding.

“In spite of the myth of Lady Liberty who lifted her lamp beside the golden door to welcome the homeless, tempest-tossed from around the world, xenophobia and racism have also always been a part of the American cultural landscape,” Dorhauer said. “But the Civil Rights movement of my childhood used the stories of welcoming the stranger to marginalize the bigots and minimize their impact.

“For me, the arc of history had always slowly bent towards justice – and the voices of the ignorant racists, white supremacists, misogynists and homophobes, while they did not disappear, were moved into the margins where they had little power and less credibility.

“Decades of civil rights activism had won significant victories in voting rights for blacks, reproductive rights for women, marriage rights for same gender loving couples, equal rights for the Trans community. They are now being dismantled overnight, and our defining narrative is being rewritten. In 2016, with the election of Donald Trump, our narrative shifted.”

‘Where church comes into play’

Churches must respond, Dorhauer said. “This is where the Church, which always transcends national borders and political boundaries, comes into play,” he said. “For me, the question is this: will we will keep the narrative of hope alive? Can we remember the stories that inspired generations to embrace the stranger? Will we stand up to the bullies who are chanting, ‘Send them back,’ and remind them that ‘once we were strangers’?”

The United Church of Christ, for its part, is publicly proclaiming values of love and welcome and acting them out in organized ways, Dorhauer said. The values are visible in the UCC’s vision of “A just world for all,” rooted in love of God, neighbor, children and creation, and in phrases like, “No matter who you are or where you are on life’s journey, you are welcome here.”

He cited several recent “acts of kindness to the stranger” by UCC congregations, ranging from a New Hampshire church that resisted the deportation of its Indonesian members; to a church in Washington, D.C., that protested detention of immigrant children by hanging pajamas and photos on a clothesline; to a small Arizona church that came to the aid of a busload of migrants dropped off in a local parking lot.

Dorhauer said he hoped acts of justice and welcome would continue to increase within the UCC and among its partners in Germany and around the world. “If more of us committed ourselves to this kind of love – to be present in solidarity and to seek justice by amplifying the voices of those otherwise marginalized – and teaching it again to our children; if we practice our faith as the antidote to the poison of hate and fear being espoused by the world’s rising fascism, love will win.”

“The church in Germany is deliberating prayerfully about how to heal divides in the culture and wondering what the role of the church in that process looks like,” Dorhauer said upon returning from his trip. “They are asking deep questions in this time of great political division and upheaval about the balance between the call to be prophetic as the church and the need to be pastoral to a deeply wounded people. 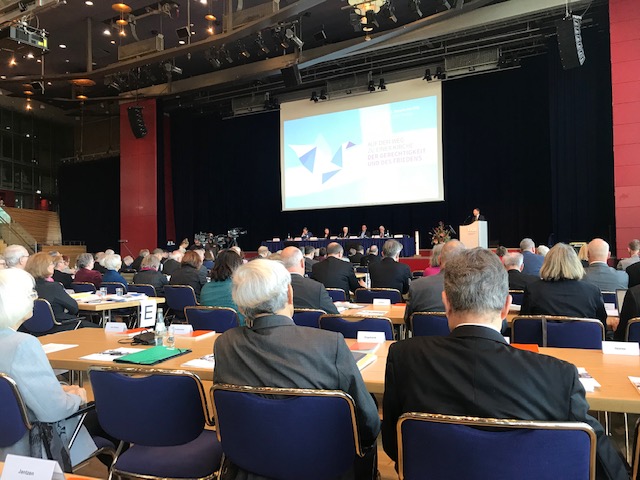 “They invited me to speak on the topic of ‘The Splitting of America and the Role of the Church.’ I took this invitation very seriously. After delivering my speech, the room erupted in an applause that did not die down for some minutes. I was deeply moved and humbled by that.”

Dorhauer said some pastors spoke to him individually as he stayed on for the Synod in the days following his speech. “One of the pastors here told me she was in tears [during the speech],” he said. “Hearing me talk about the grief we are living with at the loss of an America we grew up knowing, and fear we may not see again, touched something in her own sense of loss and grief – and moved her to share that with her congregants in ways that might be healing for her and for them.

“I have been listening for five days as German Lutheran and German Reformed leaders discern their role in a world responding to a growing tide of fascism. There are calls to do something about the pain of immigrants and refugees, about the threat of climate change, and in response to the growing neo-Nazi movement in Germany. They are working out how to be the Church and were grateful that we were there to share our own struggle with this.

“I have been proud of the way the United Church of Christ is not only seen by them as a valued partner, but also of the tales told over and over again about how they look to us as a friend that can help them wrestle with the faith in and through these challenging times.”