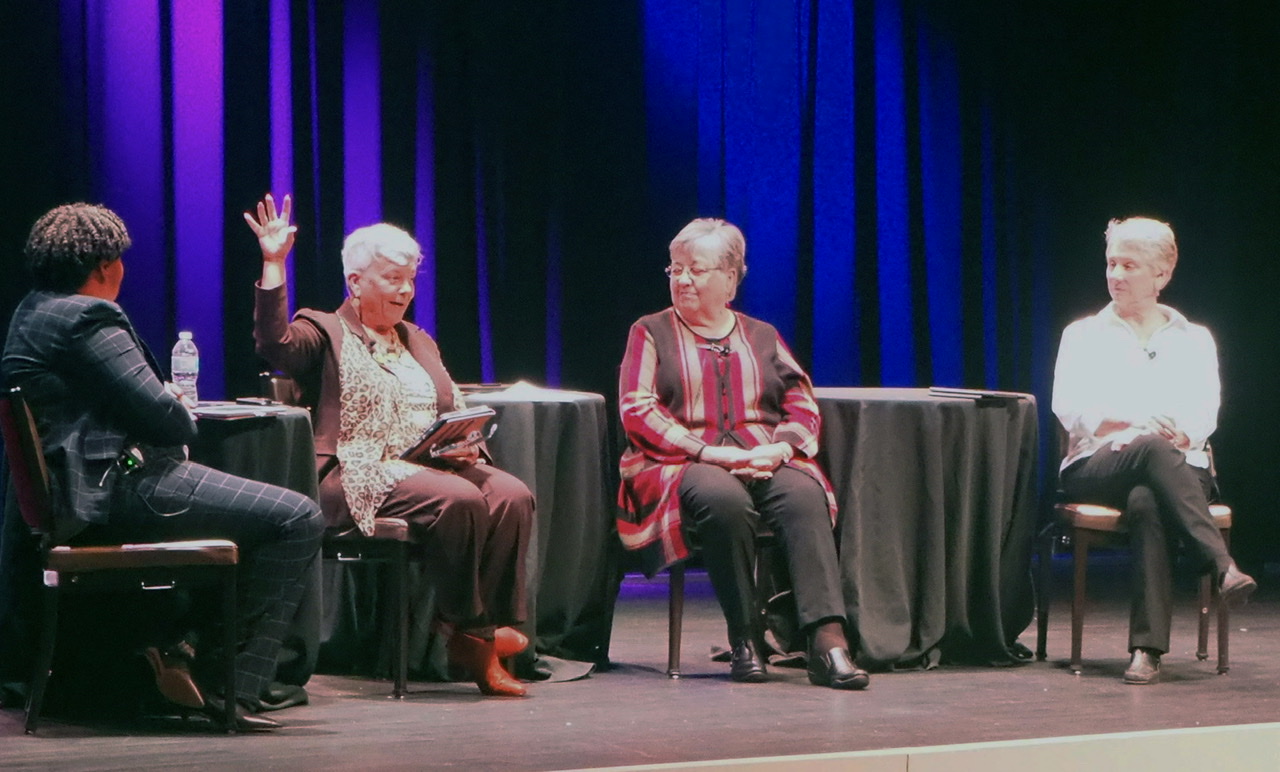 The UCC’s Council for Health and Human Service Ministries has released a 45-minute video featuring women justice leaders exploring how they were shaped and supported in their emergence as leaders in response to racism, sexism, and heterosexism. “If It Weren’t for the Women” is based on the historic panel discussion of the same name featuring four women leaders in justice advocacy that took place March 4, just before the COVID-19 shutdown, during CHHSM’s Annual Gathering in Memphis.

The release of the video is the first of several activities and resources planned by CHHSM as a follow up to its June 3 statement on the pandemic of systemic racism.

Moderated by the Rev. Traci Blackmon, associate general minister of the UCC’s Justice and Local Church Ministries, the Annual Gathering event panelists included the Rev. Bernice Powell Jackson, the Rev. M. Linda Jaramillo, and the Rev. Loey Powell. All are featured in the video, as is a special interview segment with long-time UCC justice advocate and leader the Rev. Yvonne Delk, who had to withdraw from the panel after a death in her congregation.

“We invite everyone to watch the video with an open mind, a welcoming heart, a generous spirit, and a desire to learn,” says Michael J. Readinger, president and CEO of CHHSM.

During the panel discussion in March, each woman told her story of life intersecting with justice. Incidences of sexism and systemic racism often formed turning points in the women’s lives.

“I was a Brown vs. Board of Education baby,” Powell Jackson told the audience. Entering kindergarten in Washington, D.C., in 1954, she says she became aware of race and racism on the very first day of class. “The teacher called our names and we lined up, and the little child in front of me turned around and said, ‘Are you white or are you a Negro?’ … I knew who I was the daughter of and the sister of,” Jackson said, but she didn’t know the answer to her classmate’s question. “My mother had to explain,” she added.

Jaramillo, whose similar experiences as a Latinx girl not allowed to speak Spanish at school, drove home a similar point. As she grew into adulthood, she worked with Latinx families and saw “a repeat of the segregation, and a denial of language,” she said.

In the video, Powell explained that her continuing theological evolution in part focuses on the injustices she sees around her, “the injustices many people experience because of the color of their skin, where they live, what language they speak, what their gender is, what their identity is.”

“What is the justice that God has envisioned for humanity, for all of us, and for this earth?” she asked. “My understanding of justice is that it is the equal application of law, and rights for all people, and we know — throughout history — that has not been the case.”

For the Rev. Monica Dawkins-Smith, executive associate for Wider Church Ministries and a CHHSM board member, listening to the panel discussion — comprised predominantly of women leaders of color — was cathartic “for me, a woman of color, listening to their testimonies. Their words were morsels of wisdom that will sustain me for the long journey toward ending systemic racism.”

Dawkins-Smith marveled at the women’s strength. “They have lived lives of sacrifice without sacrificing their agency or voice,” she says. “May it be so for all of us who advocate for change.” 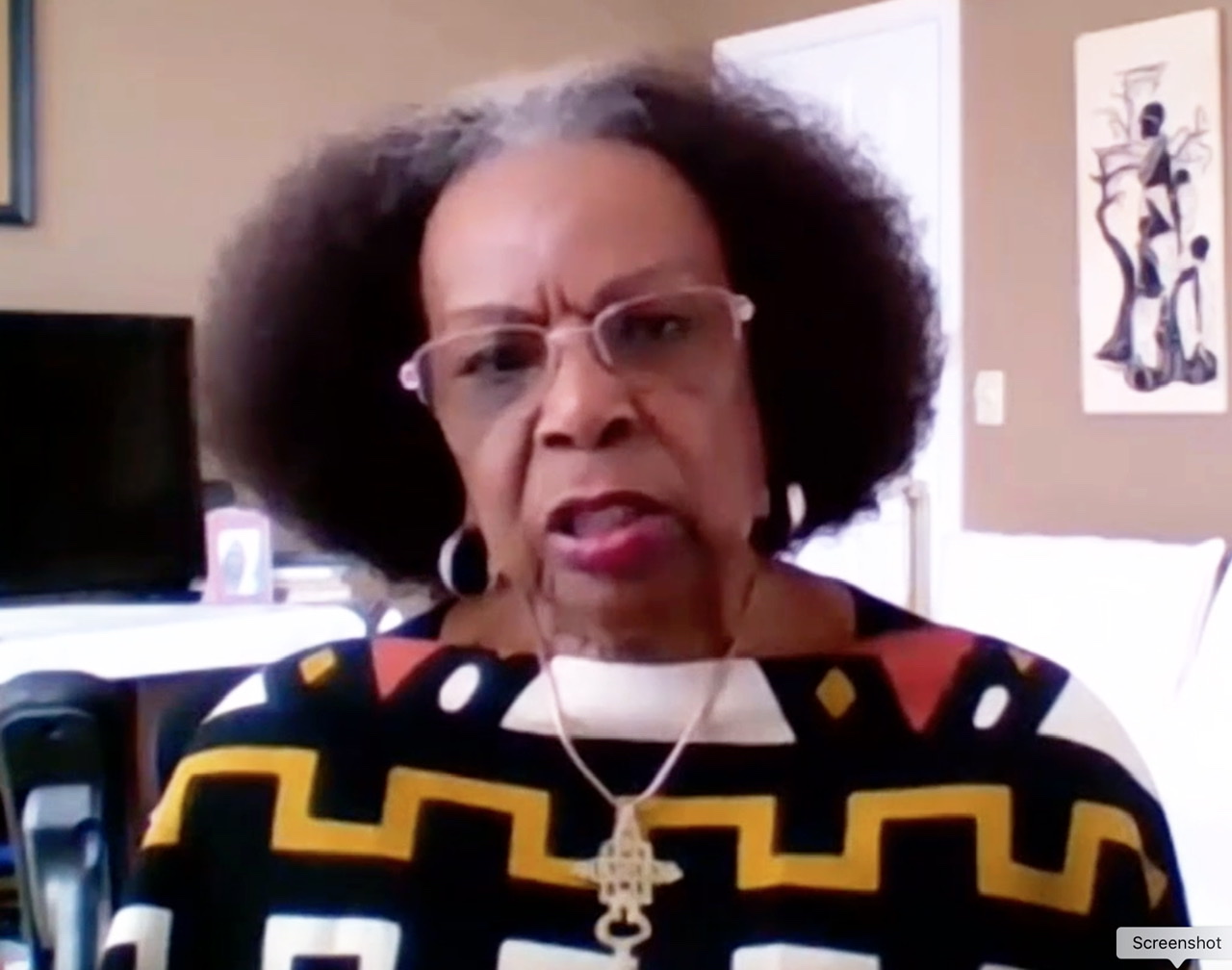 In addition to Delk, the video’s additional interviews include segments with each panelist, who reflected on the role and strength of women in the church in combatting racism, sexism, and other social injustices. Delk, who was interviewed shortly after the worldwide COVID-19 “stay at home” orders went into effect, talked about the many viruses in our world.

For Sandy Sorensen, director of the UCC’s Justice and Witness office in Washington, D.C., and a CHHSM board member, the panel discussion and this new video illustrates what she has found in working in organizations and spaces with women of color in leadership roles. She calls the experience or working with women of color in leadership roles “impactful on my approach to faith-based justice advocacy.”

“I have grown to understand the imperative of approaching justice issues and advocacy with an intersectional approach, always asking questions, listening for voices that have been pushed to the margins, always learning and working to center those voices and experience,” Sorensen says. “As a white woman I have learned – and continue to learn – the importance of ongoing critical self-reflection. It is work that is never done.”

Future video releases will include shorter, focused segments of the panel discussion. CHHSM also is planning other follow-up activities and resources to its call for an end to systemic racism. For example, in August the CHHSM team is taking place in the YWCA of Greater Cleveland’s 21-Day Racial Equity and Social Justice Challenge.

Additionally, CHHSM will host an online book study, open to everyone, on the critically-acclaimed “How to be an Antiracist.” CHHSM also is developing a new section of its website with an easy-to-navigate racial justice resources section. The monthly advocacy toolkit sections — originally begun to bring justice issues into the forefront during an election year — will extend into the coming years as well, focusing on systemic racism and other justice inequities.

“We are undertaking some tangible and real activities to address racism and white supremacy in our world,” Readinger says. “The CHHSM team invites everyone to join us in this work as we live into our vision of a just, caring and compassionate world.”

No matter how people get involved, the priority is to remain engaged. “I have been deeply shaped by growing in my understanding of the power of narrative and story, the importance of doing the work rooted in community and collaboration,” Sorensen says. “And that creates a connection to and accountability for the work that means you have no choice but to wake up every morning and keep at the work of dismantling systemic racism — in community, with accountability and with humility.”