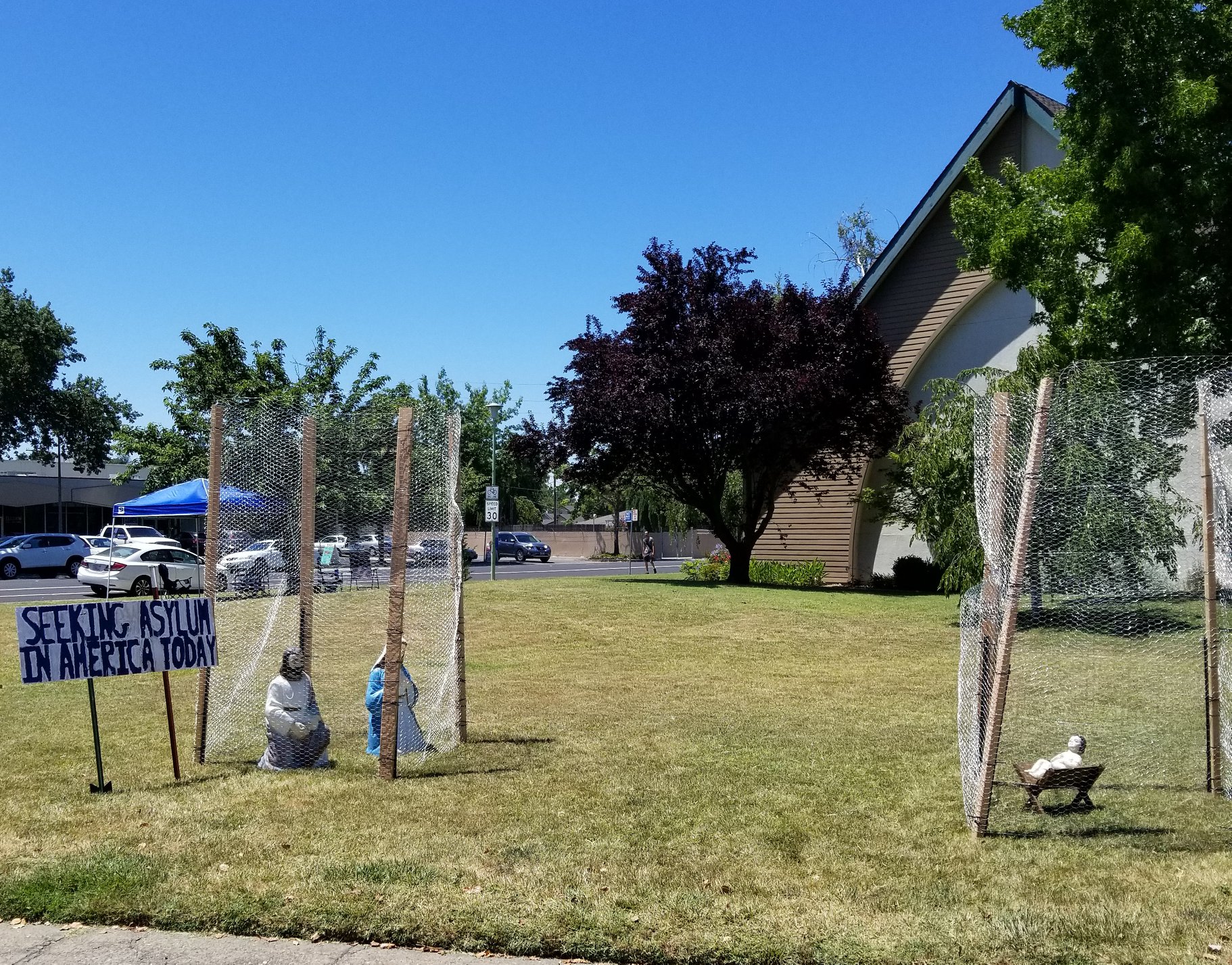 They’ve been incarcerated inside separate fences on the lawn outside a United Church of Christ sanctuary for almost three weeks – baby Jesus in one section, his parents Mary and Joseph in another. This artistic display of a nativity scene by Parkside Community Church, UCC, in Sacramento, Calif., is a visual call for change in current United States immigration policies. But it also underscores a grim reality. The story of families fleeing violence is as old as the story of Jesus himself.

“Our perspective is one of faith—and in our Christian tradition we follow a savior who was himself an asylum seeker, who lived as a Jew under the oppressive Roman Empire, who died as a Person of Color at the hands of the state,” said the Rev. Elizabeth Griswold, co-pastor of Parkside Community Church. “We feel it is our duty to use our Christian voice to connect that biblical story to the stories of families facing similarly harrowing experiences today.”

Griswold initiated the idea to use the nativity scene to illustrate how U.S. immigration policies are separating families and to show solidarity for those who crossed the border looking for a better life.

“Since every family is a Holy Family, how hideous it is to see our sisters and brothers from the south separated and locked up,” Griswold continued. “My five-year-old daughter, who helped create the display at Parkside, explains that we hope everyone who sees the cages understands that just as Jesus shouldn’t be in jail for being an immigrant, neither should anyone else. Our message is really that simple.”

Church members put the fences up around the Holy Family the morning of Saturday, June 30, before participating in a ‘Families Belong Together’ rally at the offices of Immigration and Customs Enforcement in downtown Sacramento.

The Rev. Bonnie Rambob, Parkside’s co-pastor, said the display is attracting a lot of attention – and support. Emails and phone calls are coming from all over the country after the church’s visual statement of solidarity with immigrants was shared hundreds of times on Facebook, broadcast by three local newscasts and written up in the Sacramento Bee.

“Folks stop by the scene to take pictures, to express gratitude to the church for taking a stand, to pray, and to weep,” Rambob said. “It has become a space to place grief and anger at our government’s immigration policies and practices. We continue to receive emails and phone calls, most of them in support.”

Griswold echoed that thought. “One woman who is a member of another local congregation stopped by the church and gave us a $100 donation, saying she wished her church would do something similar.”

“There have been many touching moments,” Rambob continued. “The one that comes to mind is a phone call I received yesterday. I picked up the phone and woman’s voice said, ‘Thank you. Thank you.’ Her voice broke as she said the words. I could tell that she was sobbing. She told me that she is 97 years-old, living in Eastern Washington. She said, ‘It is so difficult to know I will be leaving this world with so much evil and hate still left in it. It gives me great hope to know that there is a community of people who are willing to call out injustice and hate when they see it.’ She continued to express gratitude, almost like it was relief. When we hung up, I read Luke 2: 22-38 – The blessing of the baby Jesus by the elder prophets, Simeon and Anna. I walked outside and told the baby Jesus in the cage about the phone call. I thanked him for bringing hope, peace, love and joy, not just in December, but in July too.”

“Last year our church voted unanimously on Palm Sunday to become a Solidarity Congregation,” Griswold said. “We pledged to aid any family who is facing deportation and is seeking sanctuary; and we committed to stand in solidarity with immigrants by making public declaration of our support. So Parkside decided to creatively raise our Christian voice to proclaim this current unGodly treachery against the human family by inserting the biblical characters into the modern narrative. Creating this display was our faith-based obligation.”

And as Rambob emphasized, the nativity scene will stay separated behind fences until the current incarcerated migrant children are reunited with their families. Because as Christians, we are called to love our neighbor and provide refuge for and welcome to those fleeing violence.

“Some folks expressed their disapproval of the scene for various reasons. The folks who vocally disapprove have all identified as Christians,” Rambob said. “Church members in other denominations have shared that they are pressuring their pastors and congregations to set up a similar display on their lawns. We are thrilled about that!”