Throwing out the Money Changers:
The Decisive Event that Followed Palm Sunday 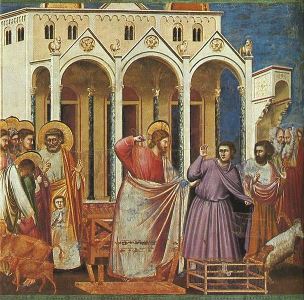 Jesus acted to bring greater economic justice. We are called to do the same.

Shortly after Jesus arrived in Jerusalem and received the warm welcome of cheering crowds, he went to the temple. There he confronted the buyers, sellers and money changers and drove them out of the temple. (See Luke 19:45-48)

Jesus declared that the Temple had become a “den of robbers.”

He was not just saying that “robbery” was happening within the temple, which it was. Rather he called the temple a robbers’ den, a place where robbers stayed.

Who were these robbers who hung out in the temple? They were the religious authorities. According to Marcus Borg, Jesus’ charge “indicted the temple authorities as robbers who collaborated with the robbers at the top of the imperial domination system. They had made the temple into a den of robbing and violence.”

Other scholars point out that the temple was “the governing institution of Israel, the center of Israel’s political life and power ... [and] so much of the activity of the Jerusalem temple hinged upon buying and selling and various modes of exchange that it is no exaggeration to say that in a real sense the Temple was fundamentally an economic institution” (emphasis in the original).

So Jesus’ actions in the Temple were not only religious.  He was also opposing the abusive economic and political institution of his day.

If we are to follow Jesus’ example in 2016, we must speak out and act to expose and oppose economic oppression. Today as in Jesus’ day, this oppression typically happens because of the way the “system” – our rules, laws, regulations, and customs – is set up. For example, consider the following abuses of our “system.” 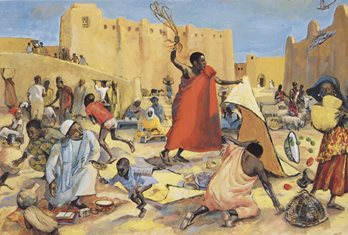 •    The “system” sets the minimum wage for tipped workers at $2.13, where it has been since 1991. Anyone who earns more than $30 in tips per month can be classified, and paid, as a tipped worker. Some 4.3 million workers are categorized as tipped workers; two-thirds are women.

•    The “system” does not require employers to provide paid sick days. So over one-quarter of all employees (over 43 million people) have no paid sick leave. If they get sick, as we all do, or if a family member is ill, they are not paid for the time off they take and they may lose their jobs for missing work.

These are just some of the current abuses. If we don’t like the system, if we think it violates our values and is at odds with our faith, then we need to get involved and change it. We must follow Jesus’ lead, raise our voices and act to end these systemic abuses.

We might be accused of engaging in political activities, just like Jesus was. But if we are to follow Jesus, it is what we must do.