Bringing Community Funded Solar to Your Church – Here’s One Way 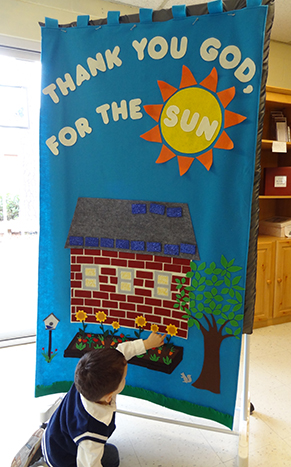 Community UCC is a relatively small (about 120 active members) congregation located in Raleigh, NC, that has long had an active interest in environmental stewardship.  We created our Justice in a Changing Climate Task Force (JCC) in 2007, recognizing that climate change will affect those with the fewest resources more adversely and sooner than the rest of us.  The JCC began with a focus on educational activities, attempting to engage the entire congregation, including the kids.

In 2012, the congregation held a retreat at which members requested that the JCC investigate installing solar panels.  The JCC explored various funding models, talking with and visiting a number of churches and synagogues that had already installed an array.  We got help and advice from non-profit groups with experience and expertise in renewable energy installations.  We solicited bids from three vendors.  Throughout the research phase, we kept the congregation in the loop.

To enable broad participation, we decided to use a direct donation model to fund the project.  We realized that our array might serve as a pilot project testing community-funded solar and be an inspiration for other non-profits.  Ours is a small church, and if we could pull this off, others could as well.  Throughout our research phase, we had heard from neighbors and friends who wanted do something to combat climate change and to offset their personal output of CO­2, but who were not able to install solar at their homes or afford an entire array.  They could achieve some of their environmental goals by contributing to a project such as ours, and, in many cases, receive tax benefits as well.

In January 2015, we were ready to seek the congregation’s approval for the fundraising campaign. Our proposal included information about the array and installer, including the environmental and economic justice impacts for the equipment producers and installers. We also had in-hand pledges covering 15% of the cost from a mix of members and friends who had approached us, including the offer of a seed grant from a synagogue that had advised us.  The JCC’s passionate message that climate change is real, severely impacts the poor, that we must reduce our fossil fuel consumption to combat it, and that the solar installation would help brought the buy-in from the church to go ahead. 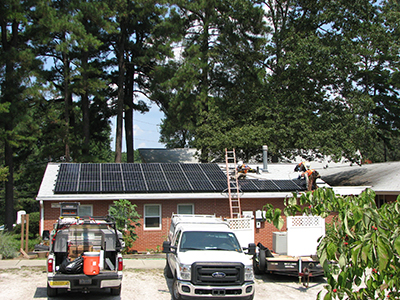 With the congregation’s approval, we solicited donations from church members, friends, and family members. We set a schedule for raising the total we needed and each JCC member used fundraising methods that felt comfortable for her or him.  We wrote emails, talked to fellow bus commuters, reached out to friends in local environmental groups and a book club, suggested a donation in lieu of Christmas gifts, and invited giving in honor of a family member.  At the mid-point in our timeline, we launched a one-week social network campaign (our youth group played a big role here) and reached our goal two months early.  Throughout the process, we kept the congregation informed by adding a sparkly solar panel to a worship banner each time we raised enough to pay for another panel. This kept energy high and was another way for children to be involved.  In the end, we actually exceeded our goal.  The excess is being used to seed solar projects undertaken by other non-profits (two churches, a school, and an affordable housing quadruplex) continuing the synagogue’s “pay it forward” gift to us.

Keys to fundraising included our passion for the project and opening the opportunity to the community. Breaking the funding goal into chewable amounts—for example, the cost of one kW of energy or one solar panel—helped donors see how they could have a specific impact on the project. And the 35% NC income tax credit to donors of non-profit renewable energy installations (terminated in Dec 2015) enabled some donors to give more.

Blessed by our God and our community, we now have a 28-panel, 10kW solar array on the south-facing roof of our fellowship hall. We estimate that it is cutting our main building’s electricity bill in half. The money saved is being put toward the other work of the church. It’s like an extra shot in the church budget. True to our goal to serve as a pilot project, we continue to provide best practice suggestions to congregations and non-profits, and to share the story with North Carolina’s administrative and legislative leaders.