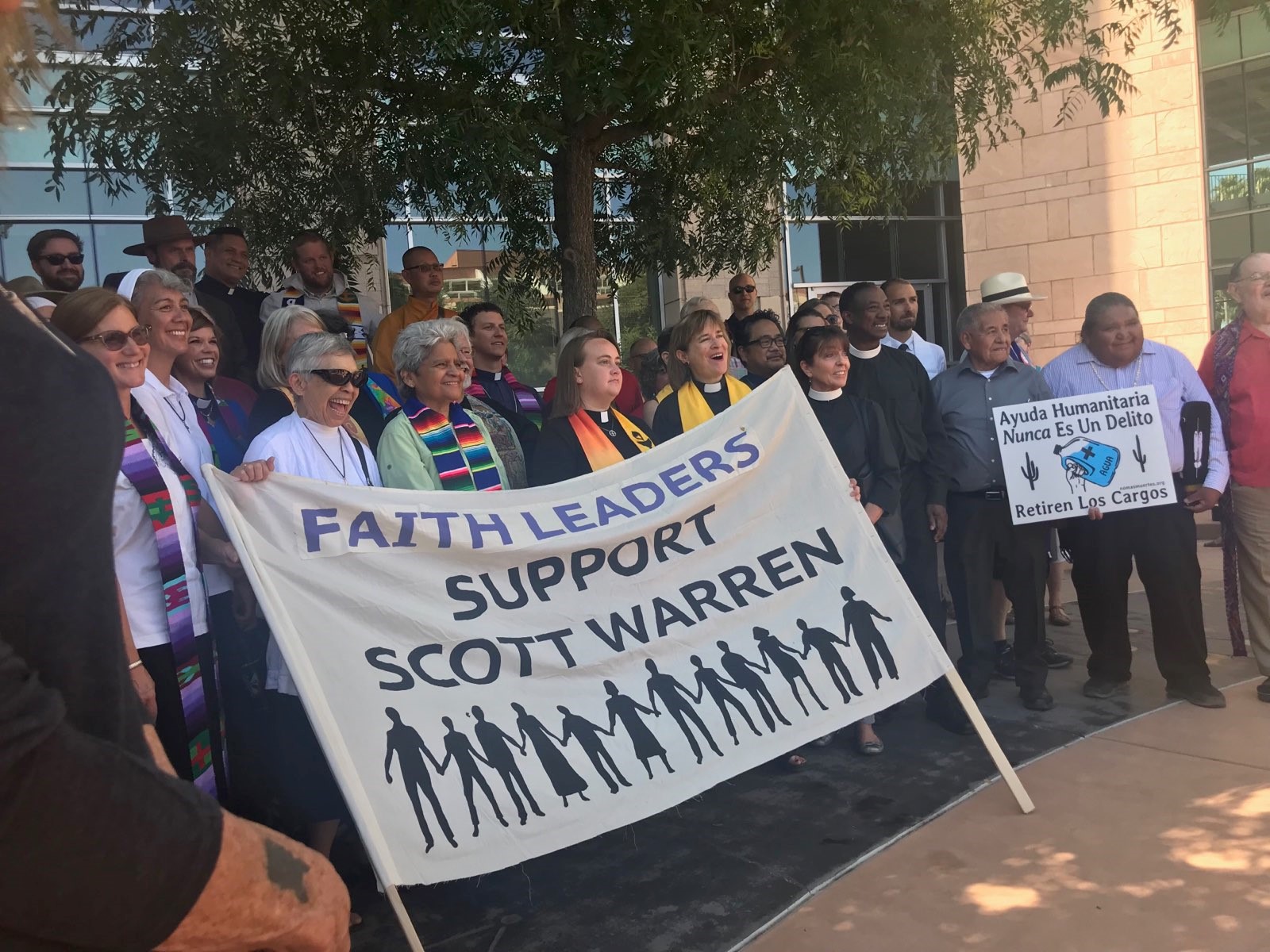 Religious leaders of several faith traditions united to oppose the criminalization of kindness outside the federal courthouse in Tucson, Ariz., Wednesday morning. A number of UCC clergy participated in the June 5 prayer service, a show of solidarity for Dr. Scott Warren, facing up to 20 years in jail for providing humanitarian aid to migrants in the desert.

Warren, a 36-year-old volunteer with the humanitarian aid group No More Deaths, is on trial in U.S. District Court in Tucson, facing three felony counts of smuggling humans. The Arizona State University geography instructor was arrested by U.S. Customs and Border Control agents in April 2018 for providing food and water to two people crossing the desert. He’s charged with harboring and conspiring to transport undocumented migrants.

“Compassion is being criminalized. Kindness is under attack. This attack on humanitarian aid is against our beliefs,” said the Rev. Alison Harrington of Tucson’s Southside Presbyterian Church. She said the questions Warren is being asked in court — Did you give them water, food and shelter? — are questions all of us are going to be asked on judgement day. “Answering yes to those questions is a fundamental part of the practice of our faith.”

“Charge me,” Harrington said. “Because if compassion is a crime, I am guilty.”

Warren’s trial reached the halfway point Tuesday morning, June 4, when prosecutors with the U.S. Attorney’s Office in Arizona rested their case and the judge denied the motion to acquit him.

“Water is made to protect people, not to incriminate people,” said Verlon Jose, vice chairman of the Tohono O’odham Nation, in the action organized by No More Deaths, the Southern Arizona Sanctuary Coalition, Church World Service and the United Church of Christ National Collaborative on Immigration. He noted that following the Creator, “we are reaching our hands out to one another regardless of the color of our skin.”

“The Torah demands you must know the heart of the stranger,” said Rabbi Stephanie Aaron of Tuscon’s Congregation Chaverim, who then sounded the Shofar in a call for sacred action. The religious leaders spoke of staying true to one’s values in the face of repression as one cares for neighbors on the margins.

“The best human being is one who gives refuge to another,” said Imam Watheq Alobaidi of Muslim Community Center, Tucson. “We pray that Warren is rewarded for his acts of compassion, rather than punished for them.” 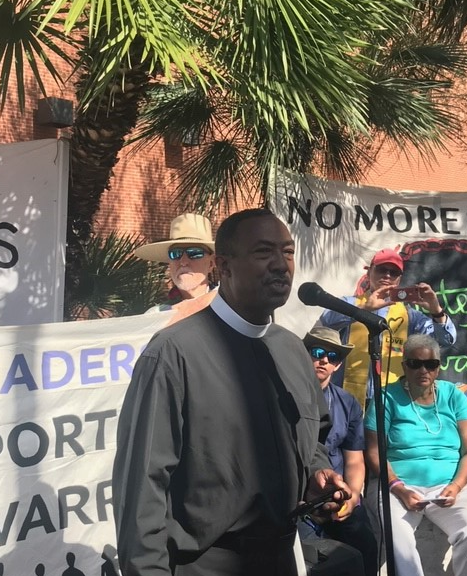 The Rev. Madison Shockley II, pastor of Pilgrim United Church of Christ, Carlsbad, Calif., said this case questions our humanity: “Take heart, Scott, you will not lose your reward. Giving water to another child of God is not a crime. It is a human right. Our own founding documents say every human has the inalienable right of life, liberty and pursuit of happiness. Not every citizen. Every human. The only question that needs to be decided is this: Are migrants human? Yes!

“The real question being decided today is not are they human, but are we human? Our humanity is at stake. If we cease to have the capacity to give a cup of water to another, we have lost our humanity and forfeited our reward.”

The group of 100 souls blessed Scott Daniel Warren just before his entrance into the courthouse on Wednesday. The action echoes the calls of other UCC clergy who have been speaking out in his support.

“Loving acts like leaving water in the desert becoming criminal, and advocating fiercely for just policies, are just so dangerous that they [the government] try to silence folk,” the Rev. Kaji Dousa, senior pastor of the Park Avenue Christian Church, New York City, said outside the Tucson courthouse on Tuesday.

“The God I worship promises a reckoning. We need to exercise our right to the religious freedom of protecting life. The whole point of faith is that the bully doesn’t win. We are not going to be intimidated,” Dousa continued. “To Scott, I want to share the word from the prophet Isaiah – ‘No weapon against me share prosper.'”

UCC Southwest Conference Minister the Rev. Bill Lyons, in a reflection published last week as Warren’s trial began, noted that similar arrests and intimidation of U.S. citizens living their faith’s values have been reported all along America’s southern border.

“Living our faith in relationship to our neighbors regardless of their citizenship should never be a crime,” Lyons said. “Preventing the deaths of people in the desert is what God asks of us.”

On Wednesday afternoon, trial observers say, Warren took the stand and told the court about recovering the bodies and skeletal remains of 18 individuals who had died in the desert surrounding his home since 2014. He testified that his approach to providing humanitarian aid is informed by three fundamental intentions: relief of suffering, respect for human dignity and the right to self-determination.

Thursday, Warren is expected to continue his testimony in his defense.