An End in Sight?: A Perspective from a Church in Flint

This commentary is written by the Rev. Deb Conrad who serves as the pastor for Woodside Church in Flint, Michigan. 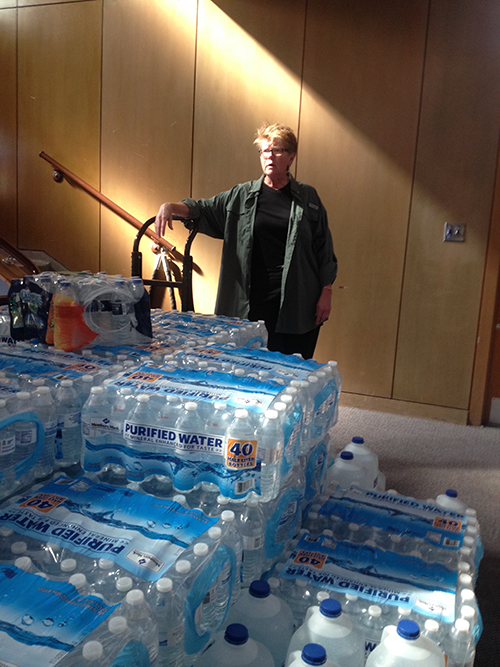 A member of my church named Karen Eaton texted me today to say that she had an extra copy of the Flint Journal’s water supplement. She wanted to know if I would like to have it as a resource. “It covers the water crisis from beginning to end,” she wrote. Then, in a separate text, she amended: “Sorry, there is no end.”

Who would have thought we’d still be dealing with this? It has been about two and a half years since the water was switched, precipitating the poisoning; it has been more than a year, now, since Dr. Mona Hanna-Attisha  announced to a room of government officials, activists and journalists that there was indeed something wrong with the water.

In that time, we’ve had state promises, federal sympathy, the world’s attention. But too few new pipes. So, while we have local activists continuing to hold official feet to the fire, and some local leaders continuing to lobby for Flint in every situation they find themselves, we still don’t have water we can trust. We still staff or seek out distribution centers, still deal with filters, still deal with health effects, and still wait for another shoe to drop, though the shoes are starting to pile up. 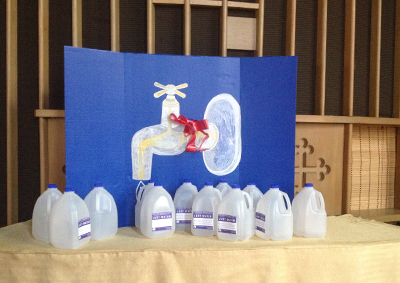 Then, the next shoe. News is that, in our mistrust of water, we are neglecting proper hygiene. So there has been an outbreak of shigellosis, a bowel thing that feels about as pretty as it sounds. Diarrhea (often containing blood or mucus), abdominal pain or cramps, fever. And it is quite contagious. To help us stay safe, our church ordered free-standing hand-sanitizer stations for the lobby, the nursery and the parlor. Hand sanitizer isn’t the only recent development for Woodside. There’s also bottled water and filters, but toward a more ecological approach, we’re shifting gears. We have now established our “safe water” stations here at Woodside, with water free to any who want to come and get it. And we’re providing larger bottles folks can fill. Our hope is that our community will reuse these bottles, and we’ll help reduce the plastic the earth and its oceans are struggling to digest.

Additionally, through our water fund, we’ve been able to invite community centers to filter water and offer it free to their neighbors. One of those community centers is the MADE Institute which has a training program for “returning citizens,” (those formerly incarcerated), to train them in high-level skills such as lead and asbestos abatement. Surely, these are skills our city needs! Woodside, through the water fund, has been able to fund tuition for three participants in this program, and we hear that employers around the state are already lining up to consider these new trainees for vital positions. It is good to see such positive developments, to be able to collaborate with such visionary people. 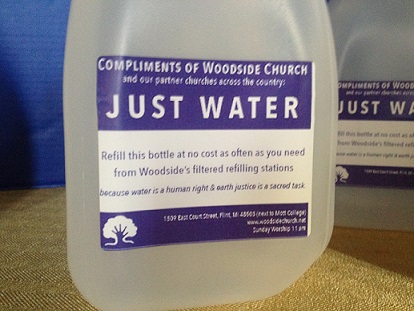 Partnerships have been important in our efforts. Early in the crisis, Woodside became the point person in Flint, the “steward” for the generosity of churches throughout the American Baptist Churches and the United Church of Christ. These, our brothers and sisters, have continued to send gifts, to keep us in mind and in prayer, to offer their help, to lobby in whatever ways they can, not only for our city, but for safe water for all the world’s people. (You’d think it would be a no-brainer that water is a human right, but there are some really powerful people who make their money off the water needs of the world, who aren’t willing to concede that.)

The end will come, eventually. Water will be better, and we’ll drink again. In the meantime, those of us at Woodside Church continue to support each other, to offer ourselves in service of others, and to give thanks for the care of folks from around the world.

Learn more about Woodside Church’s response to the Flint Water Crisis on the church’s resource page.