A Time to Break Silence

On April 4, 1967, exactly one year before he was assassinated, Dr. Martin Luther King, Jr., gave a powerful speech at Riverside Church in New York City. 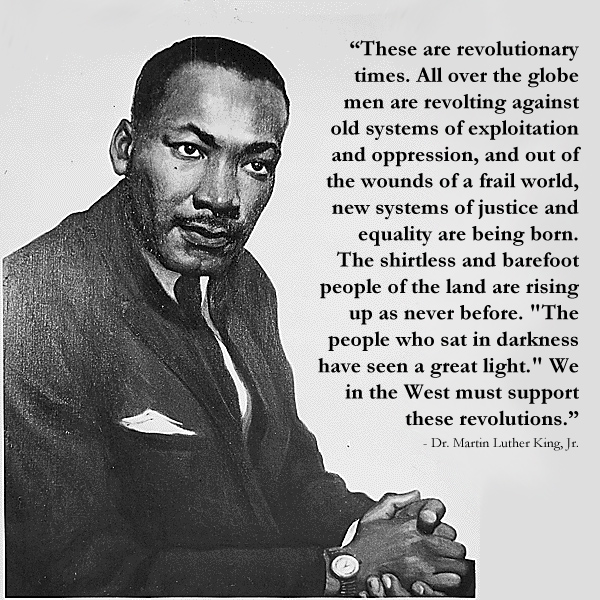 He began by criticizing U.S. policy in Vietnam but then his critique of the nation and its public policies went much deeper: “The war in Vietnam is but a symptom of a far deeper malady within the American spirit.” He called for the nation to “rapidly shift from a ‘thing-oriented’ society to a ‘person-oriented” society. When … profit motives and property rights are considered more important than people, the giant triplets of racism, materialism, and militarism are incapable of being conquered.”

He called for a “radical revolution of values” and a restructuring of society: “True compassion is more than flinging a coin to a beggar; it is not haphazard and superficial. It comes to see that an edifice which produces beggars needs restructuring.”

In the nearly 50 years that have passed since King’s speech, conditions have worsened. Military spending, adjusted for inflation, is higher now than at the height of the Vietnam War. Wealth and income differences between the rich and everyone else have widened. Racial bias and structural racism continue to kill and stunt the lives of people of color. As King proclaimed in 1967, the nation urgently needs -- and our prophets must continue to call for -- a radical revolution of values and restructuring of society.

Excerpt from Beyond Vietnam - A Time to Break Silence

I am convinced that if we are to get on the right side of the world revolution, we as a nation must undergo a radical revolution of values. We must rapidly begin...we must rapidly begin the shift from a thing-oriented society to a person-oriented society. When machines and computers, profit motives and property rights, are considered more important than people, the giant triplets of racism, extreme materialism, and militarism are incapable of being conquered.

A true revolution of values will soon cause us to question the fairness and justice of many of our past and present policies. On the one hand, we are called to play the Good Samaritan on life's roadside, but that will be only an initial act. One day we must come to see that the whole Jericho Road must be transformed so that men and women will not be constantly beaten and robbed as they make their journey on life's highway. True compassion is more than flinging a coin to a beggar. It comes to see that an edifice which produces beggars needs restructuring.

A true revolution of values will soon look uneasily on the glaring contrast of poverty and wealth.

These are revolutionary times. All over the globe men are revolting against old systems of exploitation and oppression, and out of the wounds of a frail world, new systems of justice and equality are being born. The shirtless and barefoot people of the land are rising up as never before. "The people who sat in darkness have seen a great light." We in the West must support these revolutions.

Edie Rasell is the UCC Minister for Economic Justice.