A progressive religious leader and a self-described evangelical shared their faith journeys during a conversation Aug. 18 – and surprised each other.

The exchange came at the start of a United Church of Christ webinar, “Building Bridges of Faith Across Political Differences,” on Tuesday. It featured the Rev. John Dorhauer, UCC general minister and president, and the Rev. Robert Schenck, president of The Dietrich Bonhoeffer Institute. As part of the UCC’s “Tuesdays for Nurture” series, it was recorded and can be viewed by clicking here or on the images accompanying this article.

Definitions of “progressive” and “evangelical” were part of the wide-ranging, 90-minute discussion, as were reparations and repentance, Jesus and love, and reproductive choice.

Its host, the Rev. Traci Blackmon, UCC associate general minister, said long before the conversation was over that it had already largely become what she had hoped for: a model of deep, honest listening.

A three-time convert and an almost-priest

Blackmon, who had invited the two because she already knew their stories, opened by asking each to share his faith background.

Schenck described being raised in a “nominally Jewish” family. As a teen, he surprised his parents by converting to Christianity, attracted to the Jesus of the biblical Sermon on the Mount, which, for Schenck, matched values of social and peace activism he had learned growing up. His path soon led to a difference religious emphasis.

He attended a Bible college, was ordained in a conservative evangelical tradition and – after what he described as a “second conversion” – spent 30 years in a world in which faith was considered inseparable from Republican politics. Studying a different kind of evangelical church – the Evangelische Kirche of the German pastor and Nazi-resister Bonhoeffer – led him to a “third conversion,” back to the Jesus of the poor, the hungry and the excluded. Now, he said, while still describing himself as an evangelical, “I spend a lot of time between two camps: a very conservative evangelical camp, and I have a whole circle of new friends such as yourselves who are helping me see things from a different angle.”

Dorhauer told of growing up “in a fairly strict Catholic household.” Feeling called to the priesthood at a young age, he prepared for that vocation through a seminary experience that stretched through high school, college and beyond. But he began to realize his own theological views “were not in any way consistent with what I would be asked to embrace” with a vow of obedience.

Upon leaving seminary, Dorhauer met and married a Lutheran and soon realized he still felt called to ministry. Enrolling at Eden Theological Seminary in Webster Groves, Mo., he was introduced to something new to him: the UCC.

Schenck responded to Dorhauer with a “confession.” “I had already drawn a kind of stereotype here with you, John, thinking you must have been a cradle UCC guy, because of the position you’re in today,” Schenck said. “I would have never imagined that journey that you made – really interesting, fascinating, really, and not unlike my own.” 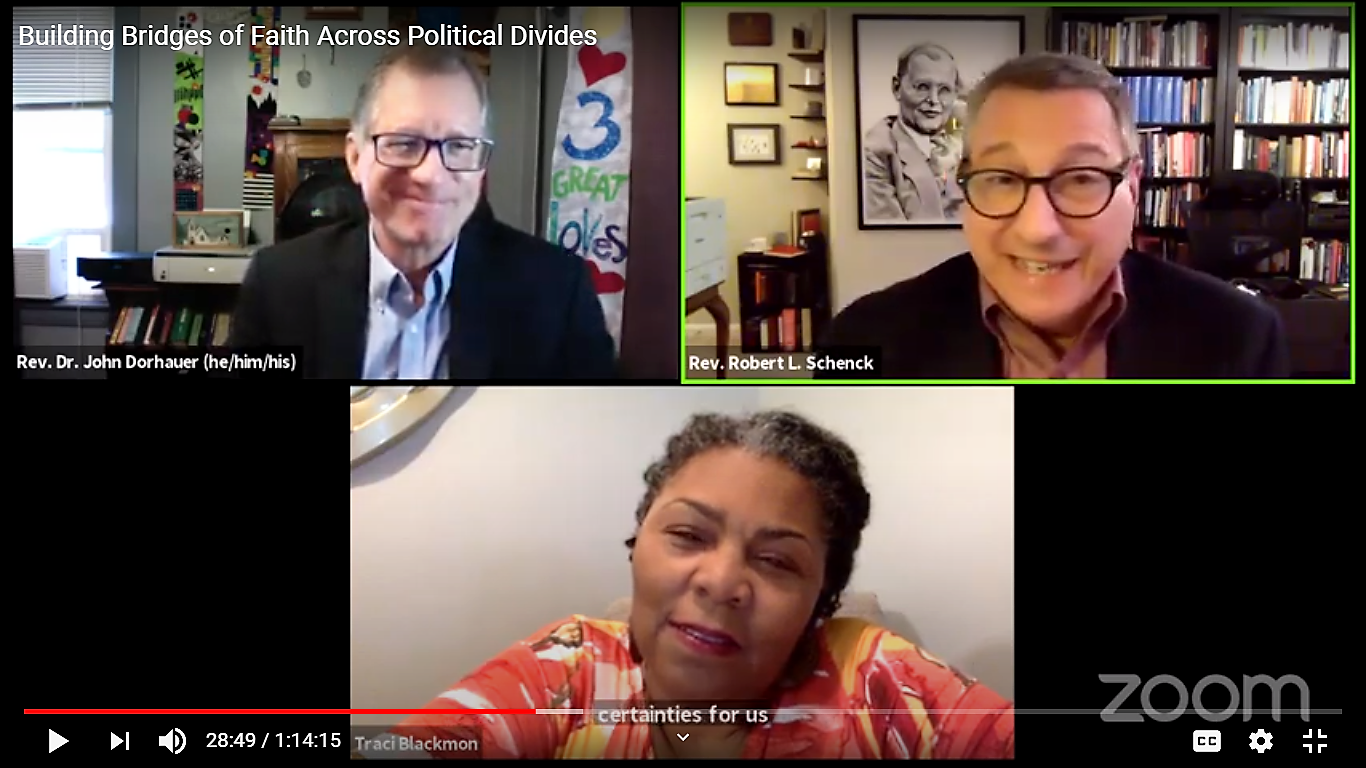 “That struck me as you were talking, Rob,” Dorhauer said. “There are similarities in our journeys that I, likewise, was not aware of. When you started by saying you were raised by a Jewish mother, my own stereotypes exploded in that one sentence.”

Blackmon said the surprise of finding common ground is something much-needed at a time when factions of Christians increasingly “demean and dismiss” each other – and a reason why she had invited the two into conversation.

Among other highlights, the trio discussed:

A change of mind

Schenck drew expressions of appreciation from Blackmon, and from listeners commenting via the webinar’s chat feature, when he told of his changed views on reproductive choice.

He had once been a staunch anti-abortion protestor, involved in a 1996-97 Supreme Court case – Schenk v. Pro-Choice Network of Western New York – that challenged “buffer zones” shielding abortion clinic clients from protestors. Two experiences — being jailed with women, including a pregnant one, and learning of their struggles, and then hearing the abortion story of a wealthy woman – changed his mind.

“I suddenly took myself out of that equation,” Schenck said. “I had always looked at abortion as my problem to solve,” he said. Now, though still unable to celebrate abortion, he realized it was totally a woman’s own decision to make.

Blackmon said she would invite Dorhauer and Schenck back to continue the conversation on bridging divides.