Repeating the word “now,” scores of low-income people took to computer and TV screens June 20-21 instead of marching in Washington, D.C. They called on America to take up the economic vision of the Rev. Martin Luther King Jr. and “invest in the welfare of all.” 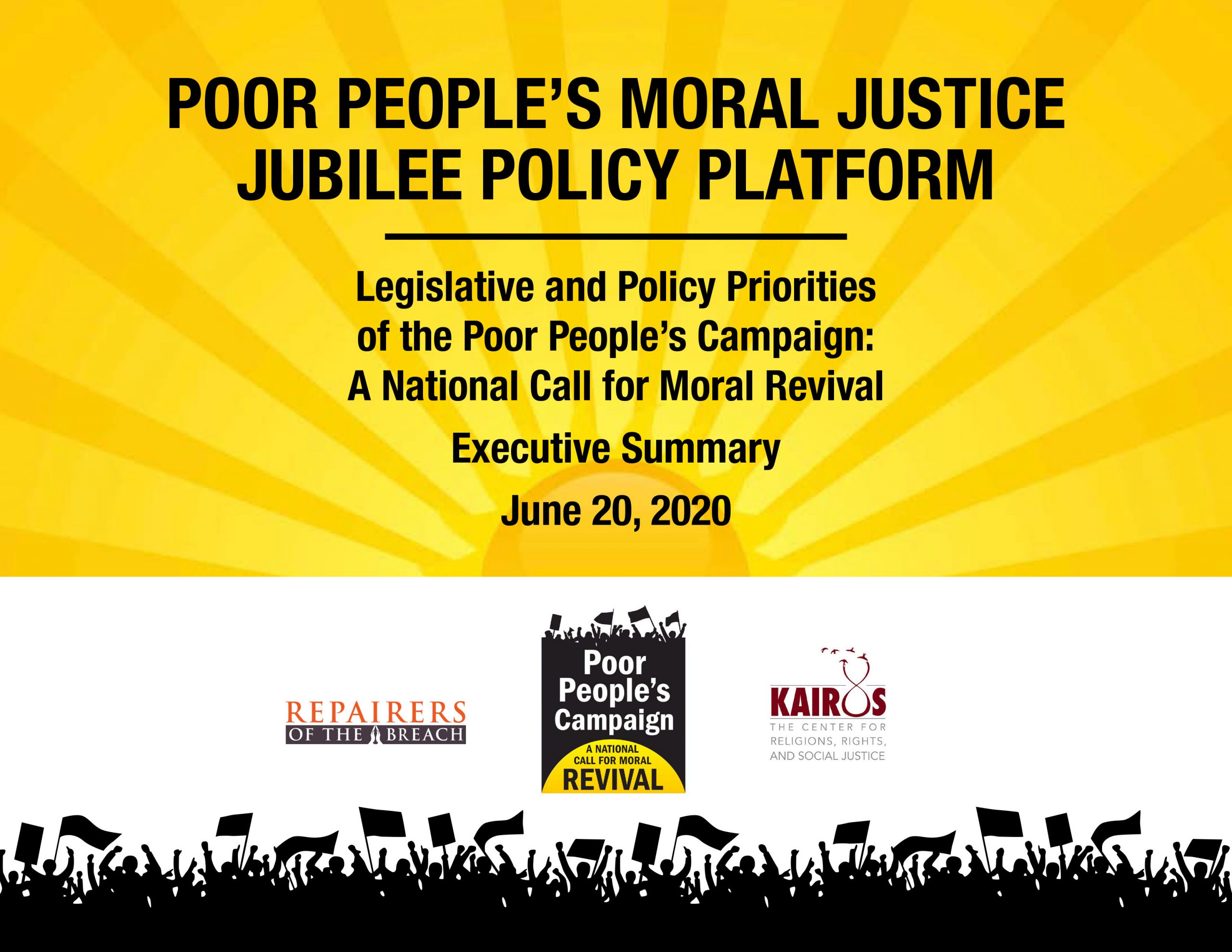 The United Church of Christ was among dozens of religious bodies and other organizations sponsoring the Poor People’s Campaign’s “digital justice gathering.” The webcast replaced the campaign’s “mass moral assembly and march on Washington,” long scheduled for June 20 before the COVID-19 pandemic forced it online.

The fast-paced, professionally produced presentation drew some 1.2 million viewers on Facebook Live over the course of three weekend webcasts, and additional eyes and ears on CSPAN, MSNBC and radio network simulcasts, according to a press release from the campaign. The event was recorded and can be viewed at the campaign’s website.

With a mix of music tracks, live remarks and video from campaign rallies held around the country since 2018, the event primarily featured poor people and their “front line” allies describing real, daily struggles – and policies that could make things better. It was peppered with cameos by famous supporters such as Danny Glover, Al Gore and Jane Fonda and brief interviews with professors and economists.

The 3-hour, 22-minute event asked two main things of participants. One was that they put the campaign’s newly unveiled policy plan, “the Poor People’s Moral Justice Jubilee Platform,” into the hands of elected officials. The other was that they not only register to vote but also sign up online with the campaign to connect with one of its more than 40 state organizations that are already pushing the platform – locally and nationally – and are planning to hold politicians accountable beyond the November general elections.

In a summer marked by global protests against police violence, “the worst mistake we could make now with all of this marching and protesting in the street would be to demand too little,” said the Rev. William Barber III, the Christian Church (Disciples of Christ) minister from North Carolina who co-leads the campaign. “We have nonviolent power, and it’s time to use it.”

A reminder of King’s economic vision came at the start of the event, in remarks by his daughter, the Rev. Bernice King, who heads the King Center in Atlanta. “Almost 57 years ago, my father … reminded America of the fierce urgency of now – that now is not the time to engage in the luxury of cooling off, nor take the tranquilizing drug of gradualism, but now is the time to make real the promises of this democracy.” She noted that when he was assassinated in 1968, “he was working with poor people of every race, from every corner of this nation, to build a poor people’s campaign.”

She encouraged viewers to join today’s resurrected campaign to prompt America “to address with the fierce urgency of now the big issues of poverty and race.” 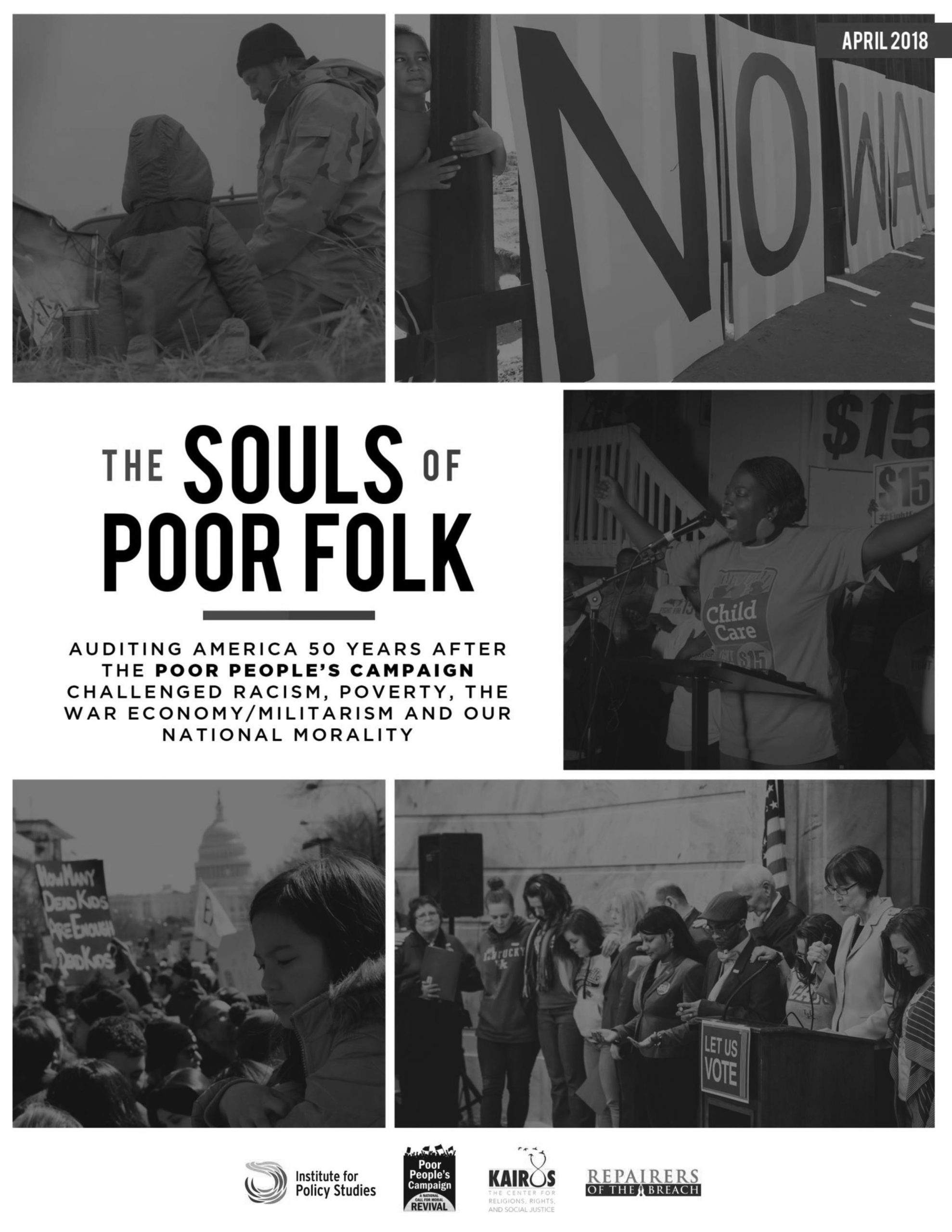 The “nows” of the webcast included references to African Americans killed recently by police or white vigilantes, including George Floyd, Breonna Taylor and Ahmaud Arbery – and to the disproportionate impact of the COVID-19 pandemic on poor people. “But in addition to these losses which have made headlines, an unseen 700 people continue to die from poverty and inequality each day,” said the newly released policy platform.  “Poverty kills 250,000 people every year in America and it is still not front-page news.”

The event repeatedly mentioned America’s “140 million poor people and low-wealth people.” That figure is from the campaign’s “Souls of Poor Folk” economic study, which emphasizes the “tangle” of “systemic racism, persistent poverty, the war economy and its inevitable militarism, and the ecological devastation from which none can escape. “

Those interlocking problems demand “a moral fusion movement of the poor and activists who will not stand by” and watch “a war on the poor at home and abroad,” said the Rev. Liz Theoharis, a Presbyterian minister who is the other co-leader of the campaign. One reason for the event, she said, was “to mourn in public so as to shock this nation’s conscience and to show where our hope for change really is. Hope, you see, comes from the bottom.”

That mourning came from every U.S. region and almost every age, race and ability of people imaginable. In just one four-minute stretch, for example, Christine Riccio of Charleston, S.C., described difficulties with medicine and food in her community. Pamela Rush of Lowndes County, Ala., bemoaned high bills and desperate conditions in her mobile home. Mary Jane Shanklin described “Kansas farmers at a breaking point” and one of the highest suicide rates in the country. Luis Rodriguez of California’s San Fernando Valley described people camping in streets, cars and garages. Olivia Williams described poor training and other low-wage work problems at an Orlando airport coffee shop.

“We’ve made this odd decision,” said Nobel prize-winning economist Joseph Stiglitz. “The things we care about a lot – kids, elderly, sick – we don’t want to spend any money on them.”

“We must change this narrative and change this reality,” Barber said in a rousing, sermonic, 22-minute closing speech. “…It’s time, America. It’s past time. … We are rising together at the right time. … What we have is people power, and that is the force that will prevail.”

A movement in this moment

And UCC people were tuned in from around the country.

“What impressed me the most were the voices of those who suffer poverty in the United States,” said the Rev. Paul Stark, a member of Trinity UCC, Tiffin, Ohio, who serves as chaplain and director of religious life at UCC-related Heidelberg University. “The common theme is their hard work, above and beyond a 40 hour week, or in spite of severe health issues, and the inability to find a living wage. On top of this is the myth and victim blaming of our culture that says all of this is the fault of those who are poor.”

Stark said he hoped their voices would prompt action for change. In 12 years of UCC-related campus work, he said, “this is the first summer … that I have seen our students in conversations on social media actively talking about needed actions to change systematic poverty and systemic racism.”

The Rev. Cecil Prescod, minister of faith formation at Ainsworth UCC in Portland, Ore., said he appreciated “seeing and hearing the multitude of people speaking about their lives and the intersection of issues.” He described it as “the prophetic tradition teaching us to recognize and seize the kairos moment. I believe that this special time in history is calling us to struggle for social and economic transformation.”

Elaine McDuff, a retired sociology professor, former UCC mission worker in Zimbabwe, and current member of Bethel UCC in Kansas City, Mo., joined the Poor People’s Campaign two years ago. “I am deeply moved by Rev. Barber’s call to action and agree that it is well past time to see progressive change in this country,” she said.

But she confessed to skepticism about achieving deep, systemic change in the face of today’s “economic and political power structures.” Eliminating poverty “is a brave goal in a strongly capitalist country, in which the poor provide an important function as the reserve army of labor, keeping unemployment rates and wages low,” McDuff said.

The Rev. Douglas Long, pastor of Umstead Park UCC in Raleigh, N.C., saw hope in the “ambitious fusion campaign” presented in the digital justice gathering. Long said he has been impressed by Barber’s Moral Mondays protests and legislative advocacy in North Carolina for years.

“He always seems to be a step ahead of most everyone else,” Long said. “I am particularly grateful for the seasoned leadership he offers to many energized, justice-seeking young people. His emphasis on the radical offering of non-violent protests is especially timely. As he closed his major address ending the PPC, it [did] indeed feel like now is the time that all things are coalescing in new and powerful ways.”