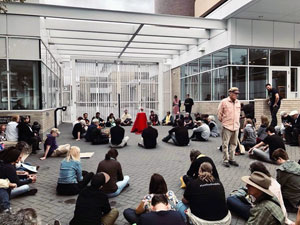 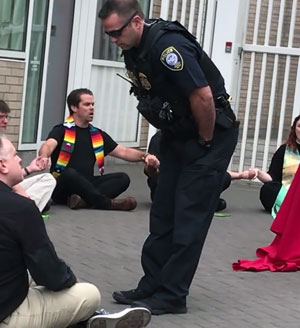 Twenty clergy from different faith traditions, including the United Church of Christ, were arrested Thursday at the “Let Our People Go” protest in front of the Portland, Ore., offices of Immigration and Customs Enforcement (ICE). The demonstration on August 30, one of several organized this month by the Interfaith Movement for Immigrant Justice, drew nearly 200 people.

The Rev. Adam Hange, pastor at First Congregational United Church of Christ in Hillsboro, Ore., and the Rev. Chuck Currie, university chaplain and director of the Center for Peace and Spirituality at Pacific University, were among those taken into custody.

“We conducted ourselves non-violently and with respect for all,” said Currie. “This was my first ever arrest. Being charged with two federal offenses, even if minor, was not what I wanted. But doesn’t this moment demand at least this little?”

Portland clergy have been holding rallies all summer demanding the release of immigrants being held by ICE. On Thursday, they were singing, praying and sharing stories to bring attention to the 120 asylum seekers and migrants detained in the federal correctional prison in Sheridan, Ore.

Hange and Currie were charged with failure to obey a federal officer and blocking a federal building.

“People of good faith can come to different conclusions on difficult issues. I respect those who might disagree with my actions,” Currie said. “My obligation as a minister, however, demands that I confront injustice and bring light to dark places. This is, frankly, the call of all those who are baptized. Non-violent protest has been part of the Christian tradition since Jesus first modeled such behavior in his ministry.”