How to Take Action

UCC pastors and lay leaders are taking action through becoming an Immigrant Welcoming Congregation and joining the Sanctuary Movement. Together we have worked with immigrants’ rights partner organizations to stop deportations, support Sanctuary cities, accompany asylum seekers and advocate for just immigration reforms that include a pathway to citizenship. Sign up to register as a Sanctuary or Immigrant Welcoming Congregations

How to Support UCC Congregations with People Claiming Sanctuary

Many congregations in our denomination have stepped up to heed the call when someone is in danger of family separation due to a deportation order, opening their congregation to create a safe space of Sanctuary. See more about how you can support below UCC congregations that are physically accompanying undocumented people who are claiming Sanctuary in a house of worship, thus avoiding deportation and keeping their families together.

The Administration continues to take significant and dangerous steps that are eroding the foundations of the immigration system and the international law that upholds access to asylum for those fleeing danger and violence. A hallmark of the Trump Administration’s immigration policies have been to deny the humanity of those seeking a new life or asylum at the border. The practice of separating families, increasing immigrant detention, and redefining access to asylum are abhorrent and undermine our values. To this date, the administration continues to separate families and hold immigration families in unsafe detention facilities. During this COVID Pandemic that has not changed. Many immigrants are being held unjustly in detention placing them at even greater risk of contracting COVID-19.  Reports of immigrant women being forced to undergo unwanted medical procedures to the ongoing terrorizing of our immigrant neighbors by interior ICE enforcement, to the exporting of COVID on deportation planes are all horrific outcomes of the administration’s white supremacist agenda and war on immigrants.

Download our Litany for Families Separated at Border by Rev. Tracy Howe Whispelway

‘Love will triumph someday’ – California pastor opens up about immigrating to U.S. – July 03, 2018

At DC immigration rally, Traci Blackmon calls on people of faith to live by moral law of love – July 02, 2018

The Rev. Traci Blackmon brought greetings from the UCC to 30,000 people gathered at Lafayette Square across from the White House, site of the “Families Belong Together” rally in Washington, D.C. on June 30, urging them to keep fighting for love.

Voices at DC immigration rally speak up, speak out against family separations – July 02, 2018

People across America, young and old, lifted up their voices at more than 700 ‘Families Belong Together’ rallies on June 30, calling for change in the government immigration policies, and the immediate reunion of migrant families separated at the border.

Heeding the sacred call to give sanctuary to the vulnerable – By Rev. Traci Blackmon and Rabbi Jonah Dov Pesner | April 18, 2018 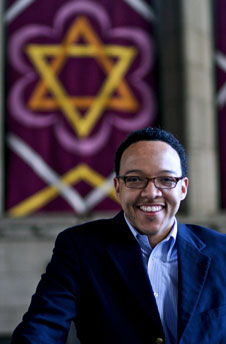 Building Sanctuary For All… All of Us

“Shouldn’t our sanctuaries offer this same kind of Sanctuary…to anyone? Wouldn’t we want this grace, and do we not call upon this kind of love every Sunday?” Read more of Rev. Julian DeShazier’s reflection on Immigrants Rights Sunday and intersectionality.

Now, more than ever faith communities from different traditions are coming together to take a bold and prophetic stand against  President-elect Trump’s harsh immigration proposals and threats to end Deferred Action for Childhood Arrival.

The push for humane immigration reform brought veterans, clergy, activists and UCC advocates to the border wall dividing the Nogales, Arizona, and Mexico communities, as part of a joint rally calling for a new model of border justice that builds bridges and relationships instead of walls and policies that create fear and division.

Blood on our hands: Stop the raids – The Hill – By Rev. John C. Dorhauer, General Minister and President of the United Church of Christ

Over the last several months, discussions around immigration policies have devolved to extremist sound bytes, with political candidates creating a new wave of anti-immigrant rhetoric to further their own agendas. Sadly, these hateful words have manifested themselves in how the United States treats immigrants. The actions of the U.S. Department of Homeland Security (DHS) are endangering the lives of thousands of asylum seekers fleeing violence, persecution, and devastating poverty in Central America. (Read more.)

Love Has No Borders – Essays and stories of how faith leaders resisted Alabama’s Anti-Immigrant Law edited by UCC Pastor Rev. Angie Wright. Get your copy here.

No Longer Strangers: The Practice of Radical Hospitality, a book by UCC pastor Rev. Wendy J. Taylor, explores the lonely and difficult lives of migrant farm workers in Northern California and follows one woman’s compassionate response to their plight.

Behind the Wall – Video by Rev. Art Cribbs. Made possible through a grant by Neighbors in Need.