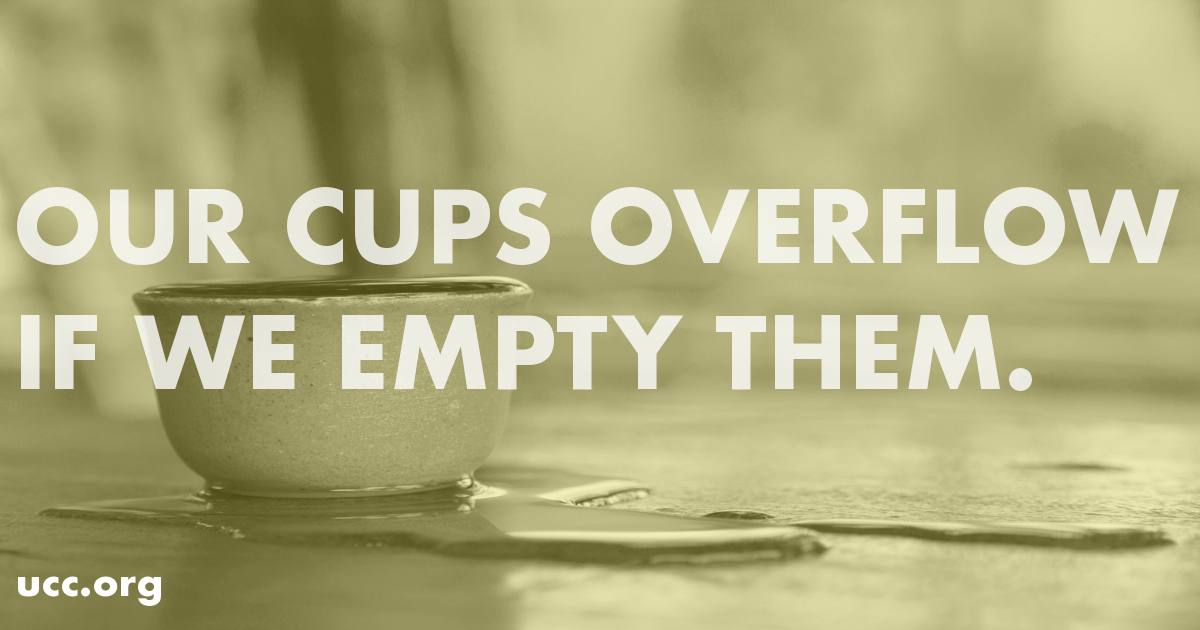 "You prepare a table before me in the presence of my enemies; you anoint my head with oil; my cup overflows." - Psalm 23: 5

Some days you can just hear the tinny sound of your own empty cup.  You drag yourself around the office and the kitchen.  You walk with your head down.  You forget to smile.  You forget you even knew how to laugh.

Other days there is a wiggle in your walk, a 23rd psalm on your lips, a lift in your heart.  You start sentences with YAY, though I walk through the shadow of death, I fear no evil.  You begin from the resurrection instead of from the crucifixion.

What is the difference between an empty cup and a full one?  The difference is in the risk of emptying it.  Overflow energy comes after we spill, not before. Instead we hear the waterfall in the background, the replenishing of plenitude released.  Plenitude hoarded gets tinny.  Spilled, it flows.  Our cups overflow if we empty them.

I think Asa, age 2 years 8 months, can help us.  His mother tells this story of his report card:  "Ms. Allison got bumped in the mouth and Asa hugged her and kept saying 'It's okay! You're doing a good job.'"  Asa could have cried or cornered or avoided.  Instead, he connected.  His tears spilled with her spill and both were helped by the connection.  "Doing a good job" might not be my preferred language in a child but at least he understands that loving is work.  I'm not crazy about report cards either but at least now we know what Asa has in his cup and what he is willing to do with it.

O God, give us a way out of the tomb of empty cups and dissolute days.

About the Author
Donna Schaper is Senior Minister at Judson Memorial Church in New York City. Her most recent book is I Heart Frances: Letters to the Pope from an Unlikely Admirer.