What’s at stake in the 2016 Elections? The fight for a living wage. 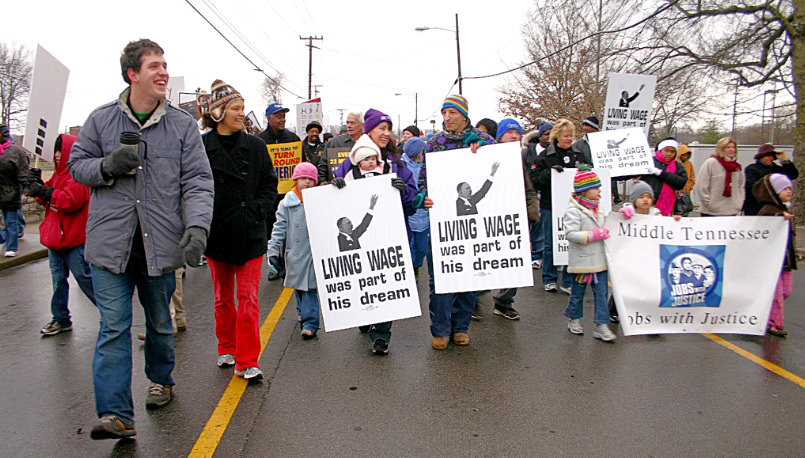 Everyone deserves a living wage. The federal minimum wage--$7.25 per hour--keeps many working people in poverty. Nowhere in the United States can a person working full-time at the federal minimum wage afford a one-bedroom apartment at the Fair Market Rent. Workers teeter on homelessness’ edge.  Child care expenses, the cost of a car repair, or an illness can put them over the edge.

Why does this matter in the 2016 elections? Many of the policies that directly impact the most economically vulnerable in our communities will be decided by the officials elected to our local, state and federal offices.

In my work for the United Church of Christ’s Justice and Witness Ministries, we are advocating for a federal expansion of the Earned Income Tax Credit to childless workers. People of all genders and gender identities, including non-custodial parents, would benefit. That would leave them with more take-home pay.

That’s much-needed help at the moment.

Raising the minimum wage is another important piece of the puzzle and is being debated in cities, states and by the U.S. Congress. Minimum wage proposals range from $12 to $20 per hour. Research shows a moderate increase wouldn’t translate into higher unemployment. In fact, when people have more money to spend on their basic needs - things like food and clothes - local economies do better.

Boosting the minimum wage to $12 per hour by 2020 is the most conservative proposal under consideration on Capitol Hill, but some cities and states are going further. Even that modest increase would benefit more than 35 million people, African-American, Hispanic and Latinx workers in particular. The average worker who benefited would earn about $2,300 more a year. Nearly 60 percent of the affected workers are women. If the minimum wage rose to $15 or $20 per hour, the increase would have an even greater impact.

Our faith calls us to ensure that God’s abundance, given to us all, is equitably shared so everyone may thrive in the fullness of life. Within an economic system of wage labor, this means that everyone must be paid a living wage and be treated with dignity on the job.

When you vote this November, vote with the needs of your neighbors - especially those on the economic margins in mind.

Learn more about God’s concern for the poor, our work for economic justice, and what a living wage might look like.