We Thank God by Working for a Just and Loving World 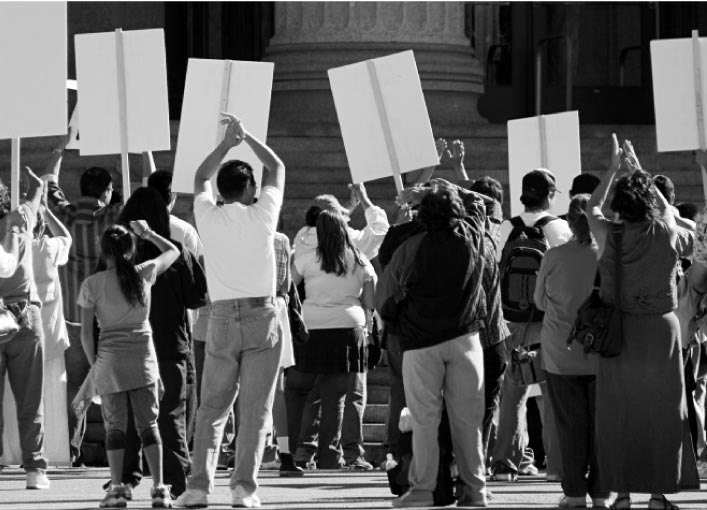 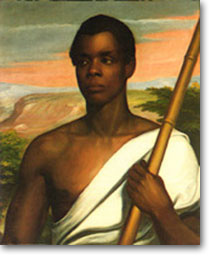 What led the people in these stories to witness to God's justice and love?

How does each story express the joy and the cost of discipleship?

In what ways do the stories challenge and affirm the ministry of your own congregation?

Stop the Chains of Oppression

"Give us free! Give us free!" shouted Senge Pieh, a young Mendi African man before the U.S. District Court in Hartford, Connecticut, in 1839. Senge was one of many Africans imprisoned for a revolt aboard the Spanish ship Amistad. Captured as slaves in Sierre Leone, they fought against their captors and were later recaptured off the coast of New London, Connecticut. Their struggle for freedom became a rallying moment for the abolition movement in this country and set the direction for future justice work for our church.

The Amistad Committee was founded by abolitionists in Connecticut, including many prominent Congregationalists, to assist in the legal battles for the release of the captured and imprisoned Mendis. Teachers from Yale Divinity School taught English, reading, and basics of the the Christian faith to the Mendis while in prison. After two difficult trials and political opposition from President Martin Van Buren, their case was finally heard before the Supreme Court in 1841. The Amistad Committee persuaded former president John Quincy Adams to defend their case. Adams argued before the high court that Mendis were never slaves and only defended their freedom. They were acquitted and free!

The committee continued their work by raising funds to charter a ship for the Mendis to return home to Sierre Leone. The committee's work also continued in the formation of the American Missionary Association (AMA) in 1846 which was a vital center of the abolitionist movement until the Civil War. The AMA made stands in behalf of racial justice establishing more than 500 schools and colleges for African Americans, founding congregations, and advocating for justice in behalf of Asian Americans and American Indians as well.

Two Worlds, One in Christ 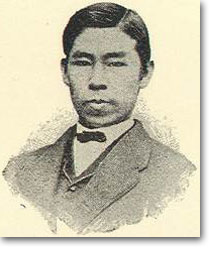 At twenty-one years old, in 1864, Neesima Shimeta was a samurai, a member of Japan's royal military order. He was also drawn to an understanding of God that he had only read of in Chinese Christian missionary books. He wanted to know more.

That year, he left Japan illegally for the United States. He boarded an American ship to Shanghai, and persuaded the captain to take him to the U.S. Stories of his journey include a port stop in Hong Kong where Neesima sold his samurai sword to raise money to purchase a Chinese New Testament. Upon his arrival in Boston, the owner of the ship, Alpheus Hardy, adopted him. Hardy was a longtime member of American Board of Commissioners for Foreign Missions (a predecessor body to UCC Wider Church Ministries). In gratitude to Hardy, Neesima took the name Joseph Hardy Neesima.

With Hardy's help, Neesima attended Phillips Academy, Amherst College, and Andover Seminary. He was ordained in 1874 and became involved in the Japan mission of the American Board. The new emerging leaders of Japan were from the samurai class, as he had been, and Neesima desired Christianity to reach out to them and others through higher education.

In 1874, Neesima passionately appealed to the American Board for their support of a Western-style Christian school in Japan. He received seed money of $5,000. Once he returned to Japan and opened Doshisha School in 1875, the Board officially adopted the school as part of their own mission. The school was led by a purely Japanese administration, and soon thirty saumurai entered the school and eventually graduated as Christian leaders. Even today, Doshisha University continues as a partner institution with the United Church of Christ.

Throughout his life, Neesima gave thanks to God through lifting up the possibilities of education for transforming God's world. He encouraged Christian higher education beyond that of pastors by advocating the establishment of a medical school and other significant fields of study. His broad understanding of evangelism blended with a love and hope for the social transformation of his homeland, Japan.

They're Not Nuns. They're Deaconesses! 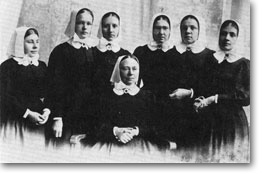 Katherine Haack, a trained nurse and widow of an Evangelical pastor, was the first deaconess to be consecrated and named the Sister Superior at the home. At a time when women were often silenced at church, women as Haack were leaders in the administration and guidance of the home and hospital.

The Deaconess movement led to the establishment of over 16 hospitals and institutions for healthcare and nurse training, as well as worldwide work. Through the years at the St. Louis Motherhouse, more than 500 deaconess sisters were trained.

Led by deep faith, the deaconesses demonstrated a life of both compassionate service and profound leadership. They gave distinctive care for those who were sick. Their approach to nursing was loving and spiritual—and professional—similar to the nurture found at home. This contrasted with typical institutional care of that era when hospitals were used as a last resort for the dying. They were also employed in teaching, parish ministry, and city missions. The deaconesses also modeled a bold new contribution by women, a holy calling, which would eventually lead to a more visible and increasing role of women in both church and society.

What Does God Require of You?

Draw upon prayerful study of the Bible to inspire and guide your congregation's mission for God's love and justice.

Explore Micah 6:6-8. Read the brief passage aloud. You might also sing the passage using the song "Every Step of the Way."

Micah 6:1-5 sets the context for verses 6-8 with a brief retelling of God's acts of love and justice for God's people. The well-known snippet of prophetic literature then takes the form of an early practice in Israel's worship. As laity entered the temple for worship, priests asked a question—a ritual inquiry for preparing for worship. Micah uses this approach to get to the heart of what God desires. Normally, the answer focused on cultic practices as making burnt or sacrificial offerings. Here the answer to what God requires names doing justice and loving mercy. Such a devoted life was the way God's people walk in faith.

Ask questions of your own congregation:

In what ways do Micah's prophetic words demand more from us?

What is God asking of us at this time in our congregation's life?

Examine your congregation's mission statement or the following statement in light of the Micah passage. In April and May 2006, Good News Community Church UCC in Chicago discerned the following vision statement. How does it express Micah 6:6-8? How do the words of Micah and of Good News Community UCC inspire your personal calling or the calling of your congregation?

At Good News Community Church, we engage in spirit-filled, interactive worship where music plays a central role. Everyone is accepted and welcome to praise God with gratitude and love, while opening ourselves to learn and grown.

Adults as well as youth are encouraged, and prepared, to develop and use their gifts for leadership in this church body, so that we are effective in proclaiming the Good News of Jesus to the larger community.

Guided first and foremost by God's word, we strive to enhance our intimate relationship with God through study groups and classes that ensure that our service, praise and prayer are guided by Christ's example.

God is in each and every one of us, and we are called to love one another and live in community. Responding to this call, we create opportunities to deepen our personal relationships with the faith community through fellowship and prayer.

We recognize that as God's children we are empowered and expected to be agents of change, speaking Truth and hope to individuals and families acting to change the powers and systems which create hopelessness, poverty and turmoil in this community.

We work to achieve global peace and justice, living in awareness of our interconnectedness.

Other ideas for biblical exploration includes becoming familiar with the biblical foundations for justice advocacy available on-line and the "Imagine Another World Is Possible" Bible Study.

The Examen: Holding the Day before God

Together, both prayer and action draw us deeply to God and to others. Together they form a path toward fulfilling the Jesus' call to "love God" and "love neighbor" (Mark 12:28-34). At the end of your day, when your head's about to hit the pillow, enter a way of praying that recalls God and neighbor. The "examen" is a spiritual practice that holds one's day before God.

Aware of God's presence, enter into a time of prayer, Imagine, recall, or glance at the happenings of your day. Be still and aware of what arises. What makes you grateful? Where was God in the day for you? Who comes to your mind? What situation—including local and global situations—arise? When did you do justice, extend mercy? What feels like a missed opportunity? For whom do you feel called to continue to prayer for? What lingers in your heart that you need to pray for or do something about? Hold all this before God, offer yourself to God's care, and rest.

For more about the examen see Sleeping with Bread: Holding What Gives You Life by Dennis Linn, Sheila Fabricant Linn and Matthew Linn, as well as Tilden Edward's Living in the Presence: Spiritual Exercises to Open Our Lives to the Awareness of God.

The recent "Worshiping into God's Future " survey looked at worship practices of UCC congregations throughout the denomination. Ten percent of our congregations bring a strong justice orientation to their entire worship experience. These congregations frequently include mentioning of environmental, economic, global, and social justice issues in sermons, prayers, and announcements. They use inclusive language regularly and understand "worship is a powerful place to connect with the world." They also link the sacraments to living justly.

The connection between worship and justice ranked higher in new congregations and highest in African American and mixed ethnic churches. Even with only 10 percent of congregations ranking high in their justice orientation, the majority of our congregations highlighted aspects of justice in worship.

Does worship in your congregation reflect your commitment to and involvement in God's reign of love and justice? What is the content of your prayers, your words, your hymns, and images that are used? What are the connections between worship and justice? How might God enrich each ministry through the other ministry?

Service matters, and so does taking action. It's nice to serve a cup of coffee to a stranger. When the coffee that is served, however, was produced by workers who receive fair wages for their work, hospitality links hands with justice. Throughout the denomination, UCC congregations are becoming involved in The UCC Coffee Project. The project links our congregations with low-income coffee producing communities in the developing world. The project has helped workers in Nicaragua, India, and the Dominican Republic.

UCC churches have become involved in many ways including serving and selling fair trade coffee, tea, and coffee. Fellowship hour has become even more — a time for participating in God's justice. Link on-line to The UCC Coffee Project to find out more or to place orders for products.

What Matters is written by Sidney D. Fowler. Designed by Duy-Khuong  Van (risingflare.com)
Copyright © 2005 - 2008 Congregational Vitality in the United Church of Christ.