Running for Our Lives

As long as children and families are running for their lives, a culture of violence is a faith issue. Jonah wasn't allowed to run away from his calling to Nineveh, and neither can the church.

On August 9, 2014 in Ferguson, Missouri a young black man named Michael Brown was shot and killed by a white police officer. While tragic and heartbreaking, this incident is not unique. This type of violence is echoed in communities across our nation. 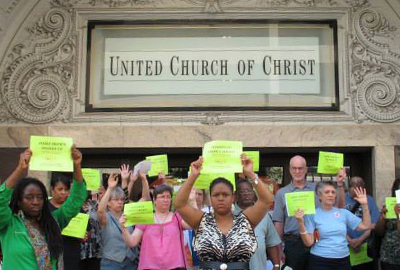 What happened in the ensuing days is something that seized the imagination and attention of a country and perhaps a world. In the weeks following Michael Brown’s shooting advocates have rallied to call attention to issues of racial discrimination and the militarization of our police forces. UCC clergy and lay leaders have offered prayers, resources, and their physical presence both to aid in the healing of the community of Ferguson, and in an attempt to address the broader systemic issues that underlie what happened in Missouri.

These are challenging times and difficult issues, but together we are called to do the work of healing the hurt in our midst, addressing the lack of understanding between communities, and taking on the sin of racism in our desire to see the Church live and be as one.

When a church claims boldly “Black Lives Matter” at this moment, it chooses to show up intentionally against all given societal values of supremacy and superiority or common-sense complacency. By insisting on the intrinsic worth of all human beings, Jesus models for us how God loves justly, and how his disciples can love publicly in a world of inequality. We live out the love of God justly by publicly saying #BlackLivesMatter.” (Read more.)

Prayers for Racial Justice
Since the killing of Michael Brown in Ferguson, MO, a collective of UCC faith leaders from across the country have gathered on conference calls convened by the Rev. Geoffrey Black. They share about the on-going efforts at local and conference settings to keep people mobilized and engaged in countering institutional racism and sanctioned violence. And they seek to identify all-Church initiatives with course of actions that can make a difference over time. Last year they called UCC churches to recognize Sunday, August 9, 2015, the actual anniversary of Mike Brown’s death, as a time for us to pray together for racial justice. In the course of that process they prepared a variety of prayers for use by congregations. These prayers may be adapted and used on other days and in other settings in which people gather to pray and witness to justice for all who suffer the violence of racial injustice.

A Pastoral Letter on Racism: A New Awakening

As America honors the legacy of the Rev. Martin Luther King, Jr. and the ideals of equality, service and beloved community that he lived and died for, the Cleveland-based United Church of Christ has released a Pastoral Letter on Racism, with the hope and expectation that it will be read in our 5,100 churches nationwide on Martin Luther King Jr. weekend or to conclude the Week of Prayer for Christian Unity on Sunday, Jan. 25.

With the recent rash of deaths of African Americans at hands of police, the UCC national leaders hope Martin Luther King weekend will be an opportunity for us to both address those issues through our continuing advocacy and hope for change toward King’s beloved community. Read the letter.

United Church of Christ General Minister and President the Rev. Geoffrey A. Black has released this statement in response to the decision of the grand jury.

Dear Brothers and Sisters in Christ:

In the months that have passed since the fatal shooting of Michael Brown last August, the attention of the nation on Ferguson, Missouri, has sharpened the reality that racism still exists in our country and is as deadly as ever.  Our prayers for justice have been fervent but the truth remains that in communities around the country, racial profiling of people of color by law enforcement, and particularly of young African American men, far too often has lethal consequences.

Day after day, protestors have peacefully marched in the streets of Ferguson, demanding that justice be done. People of faith, including UCC clergy and leaders, and young people living in the area, have provided key leadership in this organizing effort.  Even so, a state of emergency was declared days before the announcement of the St. Louis grand jury decision on whether or not Officer Darren Wilson would face criminal charges.

Our United Church of Christ Statement of Faith reminds us that God promises to all who trust in God “courage in the struggle for justice and peace.” In the wake of the grand jury decision not to indict Officer Wilson and the implication that Michael Brown’s death was justified, the people of Ferguson, of the St. Louis area, and of the nation at large are left with an open wound and no visible means to begin the healing process. Disappointment, frustration and anger abound. Any and all of these responses are understandable.

However, we are also reminded by our statement of faith that we are engaged in a “struggle for justice and peace.” These two concepts are appropriately joined.  To engage in the struggle takes courage and a renewed commitment to advocacy and action, to deepening racial awareness by engaging in sacred conversation, and to truthfully examining – then dismantling - the systems of privilege set in place by racism. It requires building God’s beloved community beyond racial divides. That is where true peace abides.

We in the national setting of the United Church of Christ stand in prayerful solidarity with the people of the St. Louis Association and the Missouri Mid-South Conference. We join you and all others who are advocating for justice and working for peace in Ferguson and the St. Louis area as well as in communities around our nation. We invite the whole United Church of Christ to do likewise.

Much more can and must be said on this topic. To that end, we are preparing a more extensive pastoral letter which will be issued during Advent. In the meantime, let us prayerfully face this moment of lost opportunity, seeking God’s gift of courage to continue the struggle. Therein lies our hope for the transformation of this society to a just society for all.

Peace and blessings,
The Rev. Geoffrey A. Black
General Minister and President, United Church of Christ 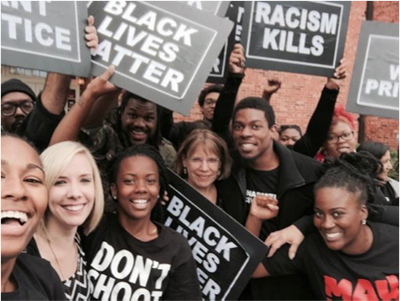 Commentary: We Are All Affected
December 4, 2014 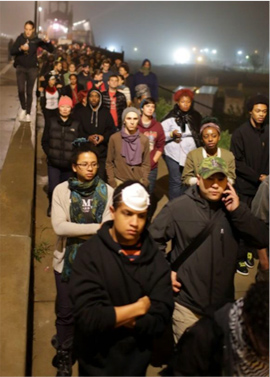 Lancaster Seminary to explore race and violence in forum on Ferguson
October 15, 2014

Moral march in Ferguson underscores justice for all
October 9, 2014

Support and solidarity with Ferguson
August 21, 2014

Tribe of Judah is an intergenerational, energetic and diverse praise and worship ensemble. The group's name is derived from one of the great biblical tribes of Israel. The word "Judah" in Hebrew means praise. This denotation is one of the visionary goals of the ensemble filled with spirited and anointed young adults seeking to praise and worship God through music ministry.

Tribe of Judah experiments with rock, hip-hop, traditional and contemporary gospel, R&B and beyond. The group is out of the box with innovative pizazz and flavor while also contemplative and attentive to timeless hymns and melodies. Tribe of Judah has mastered the art of fusing musical genres to create one sound of praise. The group will not only lead NYE 2012 in musical ministry during plenary and worship, but also co-facilitate workshops, energizers and activities throughout the youth event.

Tribe of Judah's diverse repertoire of musical scores will also include samplings from UCC's 'Sing! Prayer and Praise' song book.

Join the NYE All Strings Jam Session. Download your sheet music to perform with us at Purdue!

Getting Started
The primary contact should be the first person to begin the registration process for your group. If you are not attending, select “Registrar – Not Attending”. After you submit your information, you will be prompted to “Add Attendee”.  Add your group’s “Adult Group Leader”, the main contact who will be physically present during NYE.

Adding Attendees
As you enter your attendees, you must enter your group name the same each time. Entering the same name for your group helps insure each attendee is assigned to the same residence hall.

Questions and Information Requested
You will be prompted to answer questions regarding your groups travel information, such as expected arrival and departure information and method of transportation.

Please enter the total number of Youth and Adult attendees associated with your group. You are not held to this number.  It will be used for the NYE Staff planning purposes.

Emergency Contact(s)
The next series of questions refer to Emergency Contacts. We require at least one emergency contact per attendee.  Only one is required. We ask the relationship to the attendee.

Housing and Roommate Requests
We ask that you match your attendees with roommates within your group. Purdue University Residence Halls only allow two attendees per room (2 youth or 2 adults). Roommate requests must be mutual and noted on each person’s registration. Adults will have the opportunity to purchase an upgrade to a single room for an additional $75. Roommates can be assigned at a later date but no later than May 21, 2012.

Policies, Terms and Conditions
Each attendee must agree to adhere to the policies of United Church of Christ and Purdue University. The Adult Group Leader accepts responsibility for insuring that all attendees, parents and guardians associated with the group are familiar with the UCC Safe Policy, Covenants, Media Release Form and the terms and conditions required for registration. The forms are posted on this registration, on the main registration page as well as the www.ucc.org/nye website. Electronic signature is acceptable on all forms. A hard copy of the Medical Release Form will be required to travel with the Adult Group Leader. The forms may be downloaded and either emailed to NYE2012@purdue.edu or uploaded to the attendees registration.

Payment and Adding Additional Attendees
The payment page is next. If you are registering without payment, please select the check option. A minimum payment of $100 is required per attendee. You will be asked to add another attendee. You will repeat these steps for each attendee with slightly different questions for adults and youth. If you need to add registrations after your initial batch, just register them as attendees.  You will not need to register yourself again.

UCC Regions and the Conferences within them