In Paul’s second letter to the Corinthians, he asks them to donate money to poor Christians in Jerusalem. He writes, “I do not mean that there should be relief for others and pressure on you, but it is a question of a fair balance between your present abundance and their need, so that their abundance may be for your need, in order that there may be a fair balance. As it is written, ‘the one who had much did not have too much, and the one who had little did not have too little’” (2 Corinthians 8:13-15). 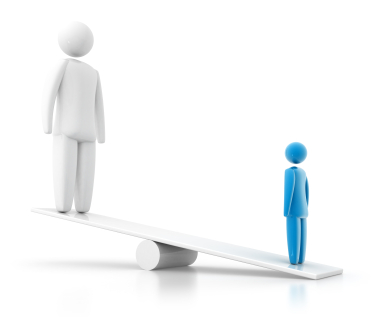 Paul instructs the Corinthians on the importance of a “fair balance,” where no one has either too much or too little. May we have ears to truly hear Paul’s message today at a time when, in the United States and around the world, there are a few, extremely wealthy people, far too many poor, and many in the middle who are struggling to avoid sliding into poverty. As Paul said, a fair balance is needed. One person’s abundance is for another person’s need. There is plenty for all if we share. The Church is called to work for a world where there is a “fair balance” between abundance for a few and the needs of many.

As UCC advocates, we understand our responsibility to care for the poor and vulnerable. Our General Synod has spoken repeatedly on issues of economic justice, reaffirming time and again our commitment to raising and keeping people out of poverty.

Inequality -- It doesn't have to be this way
Growing inequality is not the inevitable consequence of globalization, technological change, an aging population, or anything else. The rich are getting richer, the poor are getting poorer, and the middle is disappearing as a direct result of policy decisions made by policymakers in Washington, DC, and state legislatures. Read more in this Thanksgiving-themed commentary.

Learn about Economic Inequality
A Fair Balance: Reducing Inequality in the U.S. and around the World

The rich get richer, the poor get poorer, and those in the middle struggle to stay there. Rising inequality is bad for all of us. A Fair Balance: Reducing Inequality in the U.S. and around the World, a new resource from JWM, explains what is happening, describes how inequality harms all of us, and outlines how to reverse this trend. A study guide facilitates group discussion and reflection.

Two short videos give excellent overviews of wealth inequality in the U.S. and globally.

Child Poverty and Inequality  Resources on inequality and children from JWM.

How Inequality Hollows Out the Soul by Richard Wilkinson and Kate Pickett. "One of the well-known costs of inequality is that people withdraw from community life and are less likely to feel that they can trust others. This is partly a reflection of the way status anxiety makes us all more worried about how we are valued by others. Now that we can compare robust data for different countries, we can see not only what we knew intuitively — that inequality is divisive and socially corrosive — but that it also damages the individual psyche."

In a recent article, Pulitzer-prize winning reporter David Cay Johnston powerfully illustrates our nation’s inequality. Using analyses of IRS data made by two highly-regarded economists, he first notes that in 2011, average income among the bottom 90% of taxpayers was up just $59 compared with 1966. He represents that 45-year rise of $59 as a line just one inch long. Johnston then uses this measure -- one inch representing $59 -- to compare the gains of the bottom 90% and higher-income groups.

Inequality and Lack of Opportunity in the U.S.

The American Dream of moving up the economic ladder through education and hard work is largely a myth. And those who are at the top reap huge rewards, not primarily due to their talent, but to the ways in which our current political process helps the rich at the expense of everyone else. We need political reform and greater equality in opportunities for education for all. More.

Inequality and our Nation's Economic Vitality

Inequality is bad for our national economy. In addition to moral and ethical concerns about inequality, experts now think it is also bad for the economy. Evidence is building that inequality slows economic growth and causes less stable economic expansions, that is, we can expect slower growth of the economic pie and more recessions and economic crises like the one we are still trying to recover from. Experts even suggest that narrowing the inequality gap may be more economically beneficial than other factors – like boosting trade and foreign investment – that feature prominently on the political agenda.  More.

A Prayer for Economic Justice

Grant us, Lord God, a vision of your world as your love would have it:
a world where the weak are protected, and none go hungry or poor;
a world where the riches of creation are shared, and everyone can enjoy them;
a world where different races and cultures live in harmony and mutual respect;
a world where peace is built with justice, and justice is guided by love.
Give us the inspiration and courage to build it, through Jesus Christ our Lord. Amen.