Dear Members of the United Church of Christ,

The Rev. Dr. John C. Dorhauer will complete a four-year term as General Minister and President on August 1, 2019. In the fall of 2018, The United Church of Christ Board of Directors (“UCCB”), the body responsible for nominating the General Minister and President to the General Synod, will receive a report regarding the Renomination of Rev. Dorhauer from its Renomination Committee. The UCCB must then decide whether to recommend Rev. Dorhauer to the 32nd General Synod for “call by election” to a second term.

The Renomination Committee has sought feedback from: all persons who have served on the Executive Committee of the UCCB during the General Minister and President’s term in office; current members of the Cabinet of Council of Conference Ministers; leaders of all groups with a seat on the United Church of Christ Board, where those persons are not among the members described above; three presidents of Seminaries of the United Church of Christ; three ecumenical peers who would have knowledge of the General Minister and President’s work and leadership; ten persons who have served as moderators of Conferences of the United Church of Christ during the General Minister and President’s term of office; the two Officers of the Church, and National Staff. Rev. Dorhauer will also be interviewed by the Renomination Committee.

Additionally, any member of the United Church of Christ may use this web page to comment on Rev. Dorhauer’s work and leadership during his tenure as General Minister and President. If you would like to do so, please fill in the fields below, type your comment, and click submit.

The Renomination Committee is scheduled to deliver a summary report and recommendation to the UCCB by September 15, 2018. At its fall meeting, to be held in October 2018 in Cleveland, OH, the UCCB will vote on whether to renominate the General Minister and President for call by election to another term. The deadline for comments via this web page is September 1, 2018.

Grace and Peace be with you,

Frank A. Bolden
Chair of The United Church of Christ Board 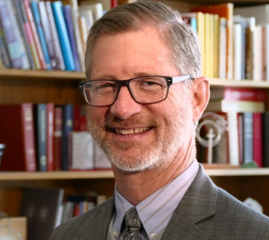 In addition, John has partnered with the UCC Board of Directors in providing oversight for the articulation of the denomination’s statements of Purpose, Vision and Mission – critical elements for the UCC’s evolving organizational strategy. To activate the new vision, John invited the denomination’s participation in a collective biennial mission initiative, Three Great Loves. In partnership with the UCC Board of Directors – and informed with responses from across the church to the question “what does a transformative UCC need to be in ten years?”-- John has called the church to accomplish essential strategic priorities over the next 10 years to position the church for a transformative future. These include attaining inclusive excellence, developing robust technology infrastructure that benefits every expression of the church, curriculum and training towards “A Just World for All”, strategic organizational alignment consistent with purpose, vision and mission, and platforms to foster and encourage innovative church.

The Shaping Our Future Campaign has been launched to generate $4 million in new philanthropic support for marketing, technology and leadership development programs critical to the health and vitality of every expression of the church. More recently, recognizing a need for thought leadership to consider, inform and shape our responsibility for lifelong, cradle-to-the-grave theological formation, John called for a summit on theological formation which was launched in spring 2018. At present, his focus is on re-establishing the primacy of the Local Church and the mutuality of relationship amongst the expressions of the church, undertaking an assessment of the denomination’s assets devoted to resourcing local church ministry relative to the needs of the local church, and operationalizing the alignment of the national setting consistent with the newly established strategic priorities for the UCC. John now serves as Vice-Chair of the National Council of Churches (NCC), and has co-chaired the NCC’s United to End Racism campaign. He was identified by the Center for American Progress as one of the religious leaders to watch for in 2017.

John insists that the Holy Spirit envisions a future in which the United Church of Christ matters. He is calling on the denomination to rethink itself and to consider new ways of being church in light of institutional religion’s changing landscape and emerging shifts in the generational populations – believing that an emergent church is already coming alongside the institutional church. John’s book Beyond Resistance: the Institutional Church Meets the Postmodern World is a call to the body of Christ to accept what the Spirit of the Risen Christ is doing to birth something new, vital, and relevant – all towards nurturing Beloved Community.