You are invited! Join a Prayer Vigil and Press Briefing at the Supreme Court 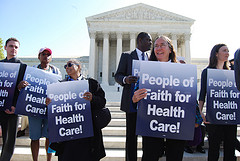 The Supreme Court will hear King v. Burwell, a lawsuit that challenges a core part of the Affordable Care Act—the provision of premium tax credits to consumers. Oral arguments in the case are scheduled for March 4, 2015. (Read a short analysis of King v. Burwell.)

If proponents of the lawsuit prevail, the government will strip premium tax credits (subsidies) from residents in states with federally facilitated marketplaces (about two-thirds of all states). Those tax credits currently help millions of low- and moderate-income Americans afford to pay their monthly health insurance premiums. But without premium tax credits, those individuals and families would not be able to pay for their health insurance.