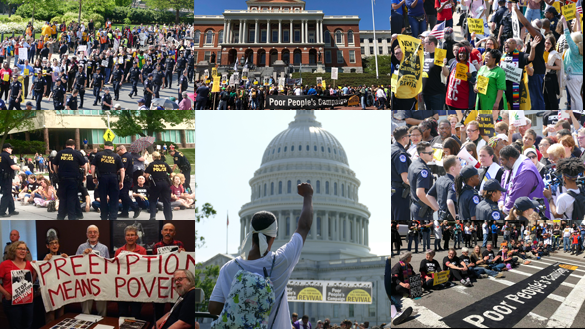 May 14 launched the Poor People’s Campaign 40 days of action and advocacy in state capitols and in Washington, DC. The 40 Days of Action featured public witnesses at more than 30 statehouses and the U.S. Capitol calling for voting rights protections, programs to address poverty, attention to ecological devastation and measures to curb militarism and the war economy.

In Annapolis, Md., clergy of the UCC Central Atlantic Conference joined people from all walks of life to speak out against what the Rev. Marvin Silver called “the distorted moral narrative of this country.”

“When 44 percent of people in Maryland are poor or low income, and the income for the top 1 percent has grown 160 percent, while the income for the bottom 99 percent has increased a mere 26 percent, there’s a moral crisis that needs to be addressed,” the CAC Associate Conference Minister continued. “There were disabled people, clergy, people of faith, people not of faith — all there to bear witness and raise our voices.” Eleven people, including two UCC leaders, were arrested for blocking traffic.

In St. Paul, Minn. the Rev. Rebecca Voelkel, Executive Director of the Center for Sustainable Justice at Lynndale UCC in Minneapolis, led the prayers at the statehouse rally for a living wage. She said hundreds gathered there in the pouring rain, “because they are coming for the innocent and we are called to put our bodies in the way. We are here today at the Capitol because corporate interests are trying to pass pre-emption.”

About forty of those advocates opposing pre-emption took action. Armed with signs which read “preemptive means poverty” they occupied the office of Rep. Pat Garofalo (R). He authored a bill designed to allow state law to pre-empt local community ordinances, taking away the municipality’s ability to pass $15/hour wage laws or laws that protect sick time. Thirteen people were arrested, including two men from Lynndale UCC.

“As people of faith, as targeted communities and co-conspirator communities, we stand against pre-emption and for a living wage because we affirm the Creator’s sacredness in humanity and in creation,” Voelkel said.

In Des Moines, Iowa, the Rev. Jessica Petersen, who serves Congregational United Church of Christ in Newton, organized a group of participants hoping to have a word with Gov. Kim Reynolds. Ten people were held by Iowa State Patrol officers for refusing to leave the capitol building. Petersen told the local paper her group is “calling for change in our nation’s moral discourse.”

In Topeka, Kans., 31 people were arrested outside the Kansas capitol. One of the group’s organizers, Rachel Shivers of First Congregational Church in Manhattan, Kan., said, “It’s not only tragic — but also immoral and unacceptable — that millions of people in the U.S. lack access to adequate, affordable healthcare and housing in one of the wealthiest nations in history. It’s my personal conviction and commitment to use any power, privilege and resources I have to help lift up the voices of vulnerable groups of people who are suffering under oppressive practices and policies.”

In Boston, Mass. more than 300 people gathered to pray and sing on the statehouse steps. Three UCC ministers — the Rev. June Cooper of the City Missions Society, Rev. Cathlin Baker, pastor of First Congregational Church of West Tisbury, and Rev. Kelly Gallagher, Associate Conference Minister of the Massachusetts Conference — shared a call to “bring good news to the poor.”

“Stories of impact from women who have suffered from inadequate services for PTSD, immigration and healthcare were interspersed with calls from communities of faith to come together and repair the breach dug so deep between us,” Gallagher said. “Clergy and congregation members from many UCC churches across the state joined hands with ecumenical and interfaith siblings, and claiming faith in humanity as together we sang, ‘Someone is hurting our people, and it has gone on far too long!’”