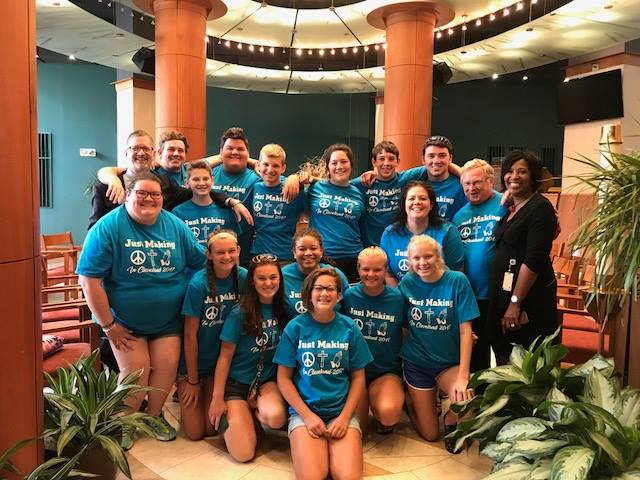 A UCC pastor in rural Southern Indiana, representing his conference, helped turn the tide in the Sri Lanka peace process several years ago with Just Peacemaking practices. Two groups of young people, from the communities and two congregations in which he serves, are following in his footsteps as they work for the love of neighbor to build a just world for all.

The Rev. Paul Jahn, who everybody calls Chip, brought his group of young congregants to Cleveland and the UCC national offices to meet with the president of the denomination and share stories. The Rev. John Dorhauer spent an afternoon in late July with the more than a dozen teenagers and their youth leaders, who all had personal testimonials, each a commitment to Just Peace making.

"They have built wells in Niger; adopted disabled children from China; gathered enormous quantities of kits for the homeless and distributed them locally; organized 5K runs to support the homeless; bought land in Haiti for a local teacher to build a school on for some of the most impoverished children anywhere," said Dorhauer. "They all embody the best of what the gospel calls us to — not just words of love, but actions that change lives around the world. They make me very, very proud."

The Young Disciples, their youth ministry for grade school children, had youngsters with the vision to build wells to bring water to families in Niger, Africa, and to offer help for homeless people in Evansville, Ind. The teens of the St. Peter and Trinity Youth Fellowship, the ministry for high schoolers, are responsible for securing the space, by purchasing the land, for a school for kindergarten in Haiti.

"We also have a project in Kenya," said Jahn. "These kids have been working with Habitat for Humanity. It's a very mission oriented church. That's why I have stuck around for a such a long time."

Called to lead St. Peter's United Church of Christ in Lamar, Ind. and Trinity UCC in Fulda, Ind., in 1979 when he graduated from Eden Seminary, Jahn said "these kids are a driving force," one which has raised thousands of dollars to make life a little easier for people in their area and around the world. They are also learning the paradigm of Just Peacemaking, which involves engagement.

Embracing Just Peace is essentially a call to address systemic injustice through working toward a holistic vision of peace with justice, which is inspired by the biblical call to Shalom.

At St. Peter's and Trinity in Indiana, that means they think, then they do. The youth pitch their ideas to address various justice issues to their churches which commit the time and resources to build on those visions to promote peace in the community, with the earth, in the marketplace and among nations.

From raising funds to assist homeless people, to sending money to ease the water crisis in Flint, Mich., to building four wells in Niger, Africa, the inventiveness and commitment of these young people fuels the work and the engagement of the congregations. As one of them said, "it's hard to say no to a kid."

Their testimonials, a few of which were captured on video, touched both the UCC president and national staff members listening in.

"I have been moved by their commitment to making the world a more just and peaceful place," said Dorhauer. "Chip has been a great colleague and is one of our champions and practitioners of Just Peacemaking."

He's also a great role model. Jahn's work in advocacy and peacemaking got started in 1988, when he hosted a husband and wife from Sri Lanka, missionaries in Indiana at the invitation of Global Ministries. The visit, stretched out to three days because of a snowstorm, set Jahn on a course that took him to Sri Lanka in 1988 and several times afterward, and to form a partnership with a local congregation, the Jaffna Diocese of the Church of South India in Sri Lanka.

Serving as an advocate for the Indiana-Kentucky Conference, the pastor of two small churches was able to move around into the conflict zone often restricted to better-known advocacy groups, learning about the decades-long conflict between Sri Lankan government and the Liberation Tigers of Tamil Eelam (LTTE), known as the Tamil Tigers, and by talking to them, getting ideas on how to mitigate the violence and working to move parties to a negotiated political settlement.

"The fighting ended as the Tiger's defenses collapsed," Jahn said. "The 25 years of just peace advocacy took the Indiana Kentucky Conference to the heart of this conflict. Using just peace practices allowed this small group to engage and impact the situation that at time moved policy; that at times saved lives."

"The youth and congregations at Trinity and St. Peter's have embraced Just Peace as a new way of engaging in ministry," Jahn continued. "They have used it responding to 9/11 by partnering with a Muslim community in Niger digging wells and addressing environmental issues planting trees and cleaning local highways. Just Peace has proven itself a powerful tool, which we hope will find wider acceptance and participation in the Church."

The United Church of Christ has been proclaiming 'peace is possible' as a Just Peace Church for more than 30 years, being the first Christian denomination to declare itself so at the 15th General Synod in Ames, Iowa in 1985.