Youth, allies issue nationwide demand for gun control during March for Our Lives 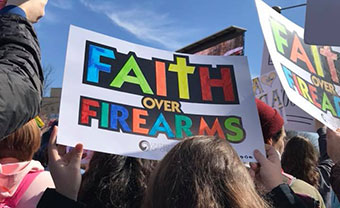 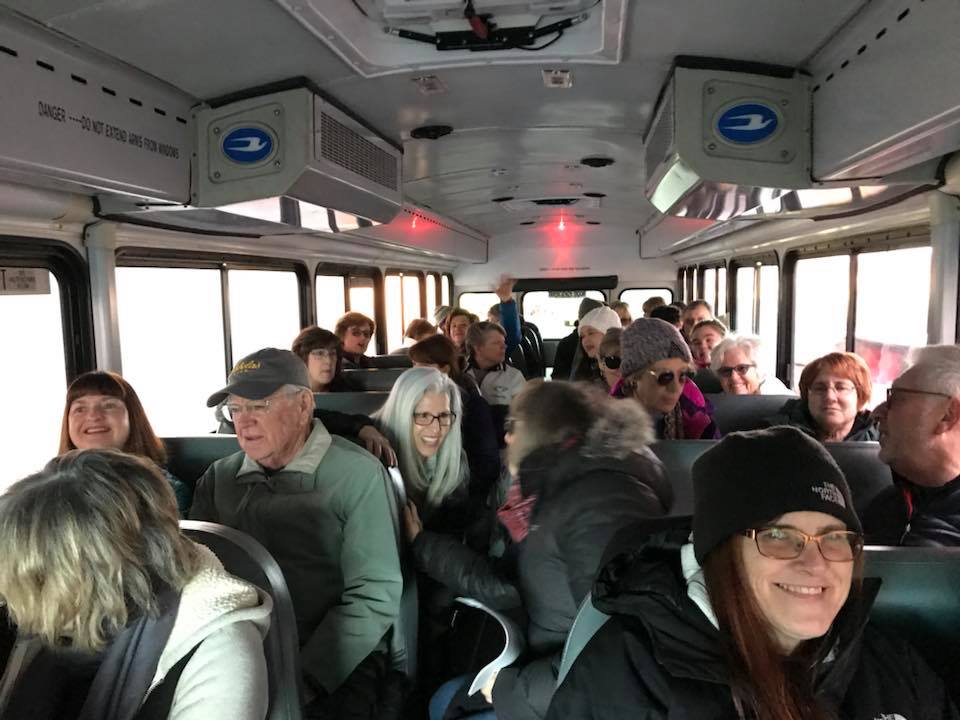 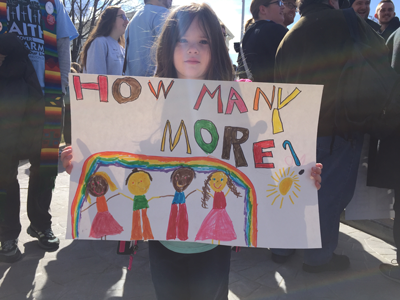 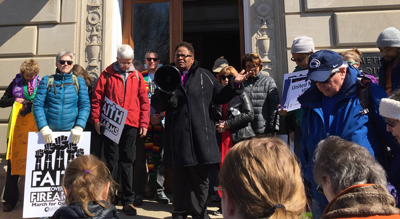 In Washington, D.C., and in scores of cities across the country on March 24, the youth of America and their allies delivered a very powerful, very definite message: enough is enough! UCC advocates, urging 'Faith over Firearms,' came out by the hundreds during the 'March for Our Lives' to demand gun reform.

By noon on Saturday, 400 people gathered at the denomination's D.C. office at the United Methodist Building, preparing to march as one united church down Pennsylvania Avenue.

Two youth delegations from the Southwest and the Minnesota Conferences United Church of Christ were front and center.

"As 'kids' we're used to being pushed away from 'adult' issues, now as young adults, we're being pushed into them," said Stori Jergens, representing Desert Palm UCC, in Tempe, Ariz. "It's all so overwhelming. Kids have gone from being told what to do to having this incredible voice."

"'Overwhelming' is what I have to say about this experience but in the greatest way possible," said Trevor Lee from Black Mountain UCC, in Scottsdale, Ariz. "We all felt really well connected to come and make a change. The overwhelming experience that I'm talking about is that by having over 800,000 students/teens coming together to make change is gonna be history. By coming together our voices can be heard. Usually teens are silent but now we are the new influencers. I feel that as a teen myself the effluence and energy during the March for our lives will stop gun violence."

The student-led voice demanding lawmakers pass stronger gun-control legislation was visibly supported by a large number of religious advocates. On Saturday in D.C., the UCC contingent was joined by marchers from the Christian Church (Disciples of Christ) and the United Methodists. Quakers and Muslims from the Islamic Society of North America joined the group during the commissioning prayer.

"To be engaged in this advocacy work is to demonstrate that the faith community is relevant to the concerns of our young people and their parents and all who accompany them on their journey," said the Rev. Barbara Kershner Daniel, senior pastor of the Evangelical Reformed United Church of Christ (ERUCC) in Frederick, Md. Her church sent two full school buses to the march in D.C. Several Jewish friends of ERUCC, from Congregation Beth Shalom and Congregation Kol Ami of Frederick, were in the group of 70 people.

"I am grateful that we had so many of our young people from our church travel along with their friends," Kershner Daniel said. "I hear their stories of fear and anxiety and the challenges they face every day trying to manage that fear and anxiety in the world in which we live. To be able to participate in this advocacy work for the church means so much to them. The adults who accompany them on the journey are a witness that we hear their stories. To have their church acknowledge their stories helps them to find some agency in taking actions that can create a different world. We are saying that we believe them and we believe in them."

"Sometimes it takes bold new voices to remind us that what has come to feel like the 'new normal' isn't new and isn't normal," said Sandy Sorenson, director of the UCC Washington, D.C. office. "I pray that we have the wisdom as a society to listen to these voices. They refuse to believe that a world without gun violence is possible. They refuse to believe that greed, guns and money mean more than their lives. On this Saturday before Palm Sunday, their hosanna was 'enough is enough.' They refuse to stop – and so should we."

That hosanna was echoed around the country in smaller marches in several cities. In Cleveland, a contingent from the UCC national offices, led by General Minister and President the Rev. John Dorhauer, represented the denomination in the rally on Public Square.

"One of our newer members said to me that her former church talked a lot but didn't put that talk into action," Kershner Daniel said. "This was the first time she had ever done anything like this in terms of attending the March. And she expressed why she was so grateful to be a part of the United Church of Christ where we put our speech into action."

That action began in D.C. on the Friday before the march when Sorensen accompanied the young people from Minnesota Conference to the offices of Sen. Klobuchar and Sen. Smith of Minnesota. "They were well-prepared, clear and innovative in their thinking about ways to prevent gun violence, and courageous in telling their stories about the ways gun violence and easy access to guns has affected their lives. They are committed to going home and staying engaged."

So are the students of the Southwest Conference. The young people from First Congregational UCC in Albuquerque, N. M. already have plans to help lead gun violence workshops over several weeks.

"Having been involved in faith-based policy advocacy in Washington for nearly 30 years, it was tremendously powerful and heartening to witness this revived spark of engagement in public policy advocacy," Sorensen continued. "Thanks to the courageous, bold leadership of children and youth, people are realizing that the public narrative can be changed if we stay engaged, stay persistent, stay true to our vision. As I moved among the crowd lining Pennsylvania Avenue, listening to spell-binding speeches, taking in the passionate, urgent messages expressed on signs carried by people of all backgrounds, I felt a sense of hope that I haven't truly felt in some time."