Women's Marchers around the country celebrate call for change 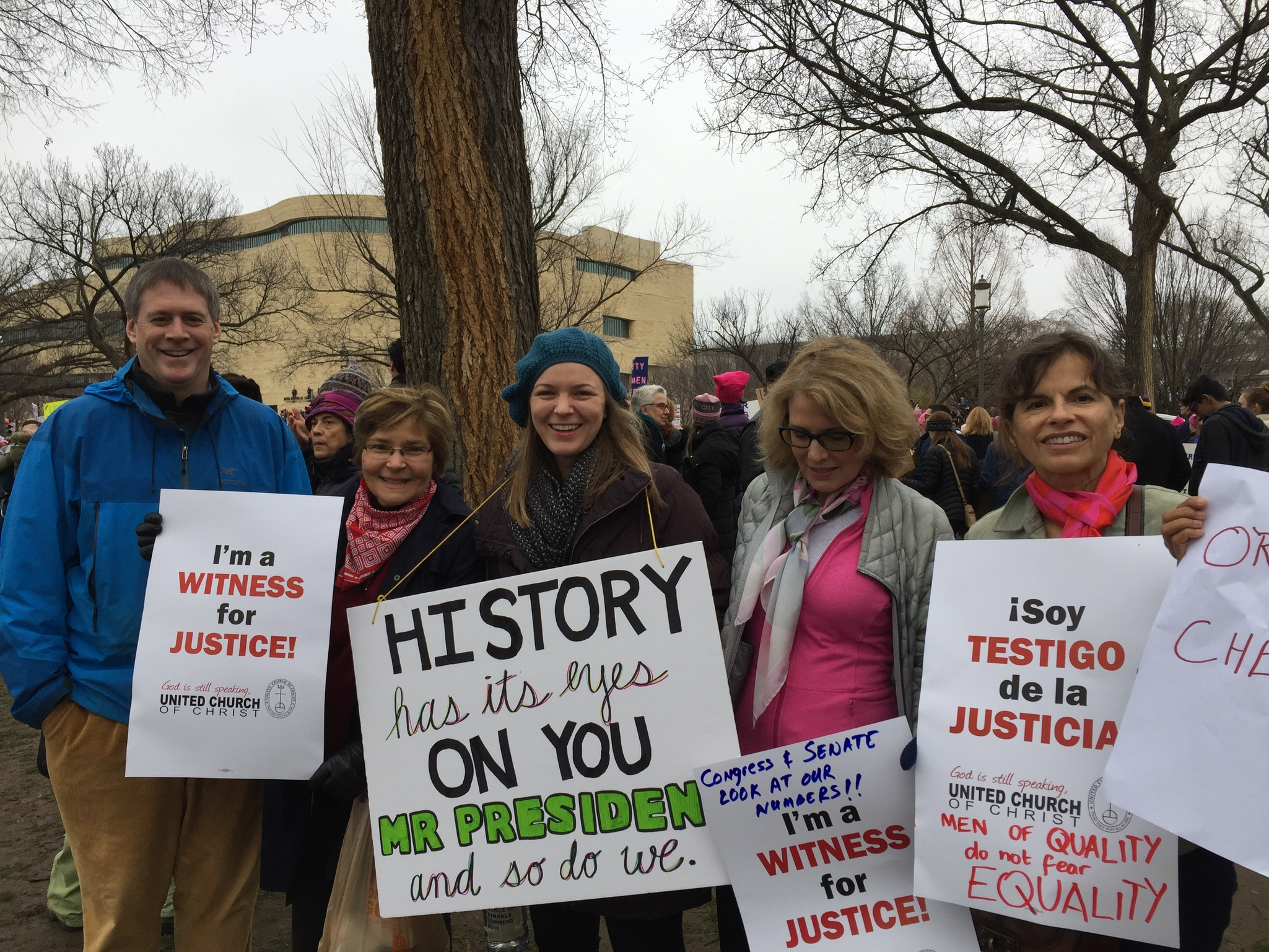 The Women's March on Washington and its Sister Marches around the country drew UCC members like a magnet, compelled by the Spirit to show up, step out and demand a just world for all.

There were hundreds of them, some wearing aprons, others carrying signs, chanting, singing and shouting in a joint witness for justice in several cities around the country on Saturday Jan. 21.

In D.C., UCC-area churches hosted hordes of visitors for hospitality and pre-march prayer. Friday night, Peoples Congregational United Church of Christ welcomed 70 people, some from as far away as Florida, for a potluck the evening before the march.

June Jeffries, president of the church's Women's Fellowship, stressed the importance of interconnection. "We are not just a solo church but we are part of a denomination, of the Central Atlantic Conference, and of the Potomac Association. We need to be aware of positions the national church is taking and activities of our association." 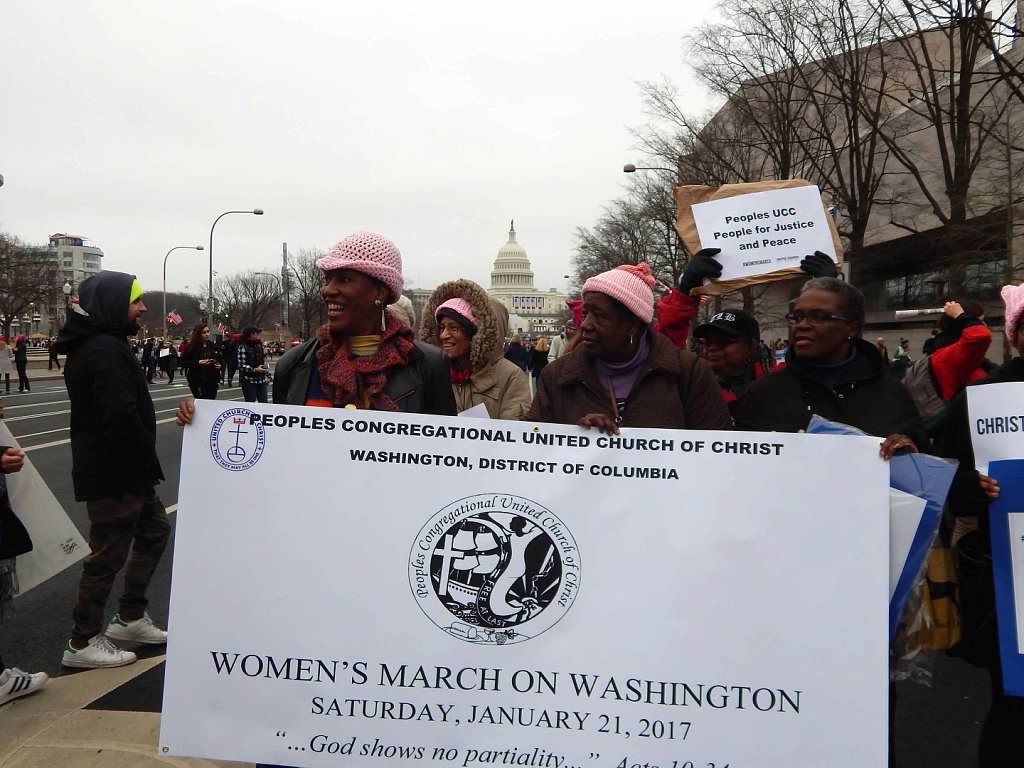 So Jeffries and her group marched for themselves, and for the church. "I see Peoples as being a leader, and I think we should be at the forefront of activism. We connected with many people, had conversation, took pictures. We were buoyed by the size of the crowd and the absence of ill will. Never heard a harsh word. It was a good experience."

"I have been to a lot of marches. And protests. And vigils. But I have NEVER seen anything like what happened today," said Jessie Palatucci, a communications specialist in the UCC Washington D.C. office. "People stood for hours.They cared for the strangers among them, offering encouragement, sharing food and signs. And when we began to march, it became immediately clear that we could not be contained. The people spilled over on to the streets of Washington. It was a powerful reminder that that we are in strong, mighty, faithful company as we work to make the world more loving and just."

"This was a witness rooted in history," Sandy Sorenson, director of the UCC Washington D.C. office said of the event. "From this spot at 10th and G Streets, NW, UCC members had gathered to join the 1963 March on Washington for Jobs, Justice and Freedom, the 1993 march for LGBT equality, the Children's Defense Fund Stand for Children March, the 2005 March for Women's Lives and many other marches for peace and an end to gun violence."

On Saturday, the march came alive with a positive, buoyant energy. "There was a prevailing sense of hope in the power of people to lift up an alternative vision for our common life, one defined by a sense of connection, common struggle, inclusion and openness," Sorenson continued. "People of all genders and gender identities marched together. It spanned generations and reflected an intersecting range of issues that have a renewed sense of urgency at the dawn of a new Administration and Congress. There were recurring chants of 'Love not hate, that's what makes America great' and 'No hate, no fear, everyone is welcome here.'"

Before the march in the Minnesota capitol, the Rev. Emily Goldthwaite Fries, associate minister of Mayflower UCC in Minneapolis, helped offer a blessing. She was heartened at the makeup of the crowd. "I'd say the turnout of 60,000 in St. Paul was awesome. Many said they were marching for the first time ever. That's great!" 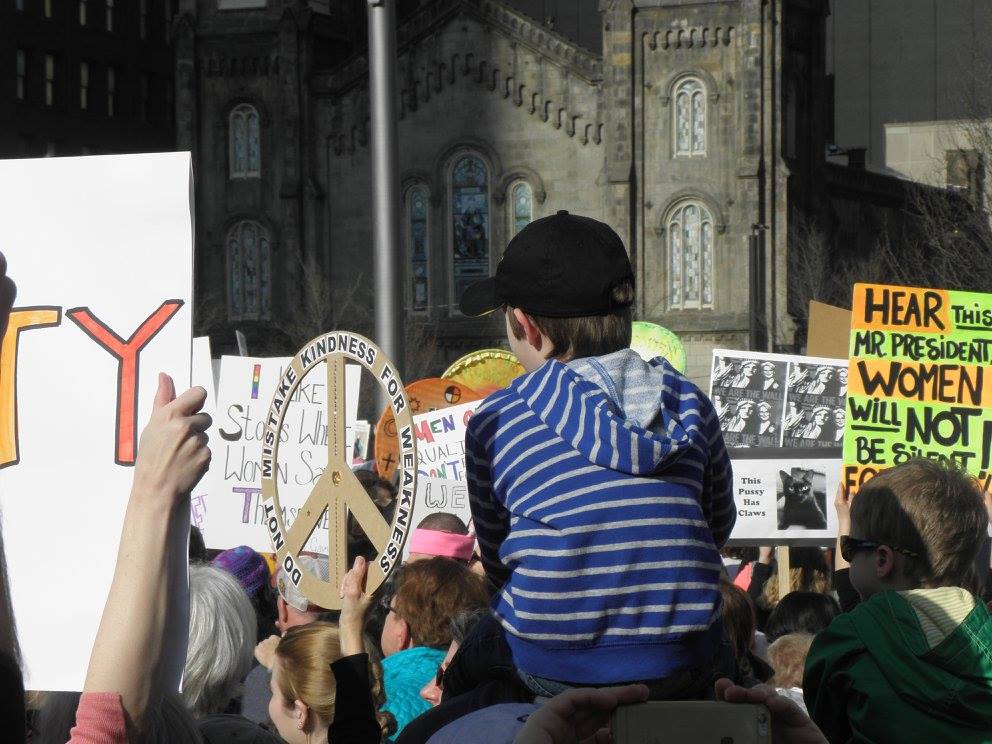 Hans Holznagel, former UCC national staffer and a member of Archwood UCC in Cleveland, noted "an uplifting celebration of resistance" as he joined other advocates on Cleveland's Public Square.

"I marched to practice the resolve I'll need to speak out against policies of the incoming administration that I predict I'll disagree with," Holznagel said. "It was also, for me, a way of opposing the disrespectful way our President has spoken about women. I learned from our mothers and fathers in the Civil Rights Movement that being present with your body, your voice and your spirit is part of the Christian path. It can change things."

"I don't know how many people participated in the Women's March in Boston — only that there were enough of us that for three hours I could barely move," said the Rev. Vicki Kemper, pastor, First Congregational Church, UCC, Amherst, Mass., one of several UCC churches represented there. "And that the people were unfailingly kind, positive, patient, creative, and determined. That we couldn't reach the UCC contingent, but we had church on the T, (transit system) with our entire car — led, at first, by children — singing "This Land is Your Land," "We Shall Overcome," and more. That Rita, the 92-year-old sitting next to me in her wheelchair, marched in the '50s with MLK. And that hope is alive and well. Watch out, world!" 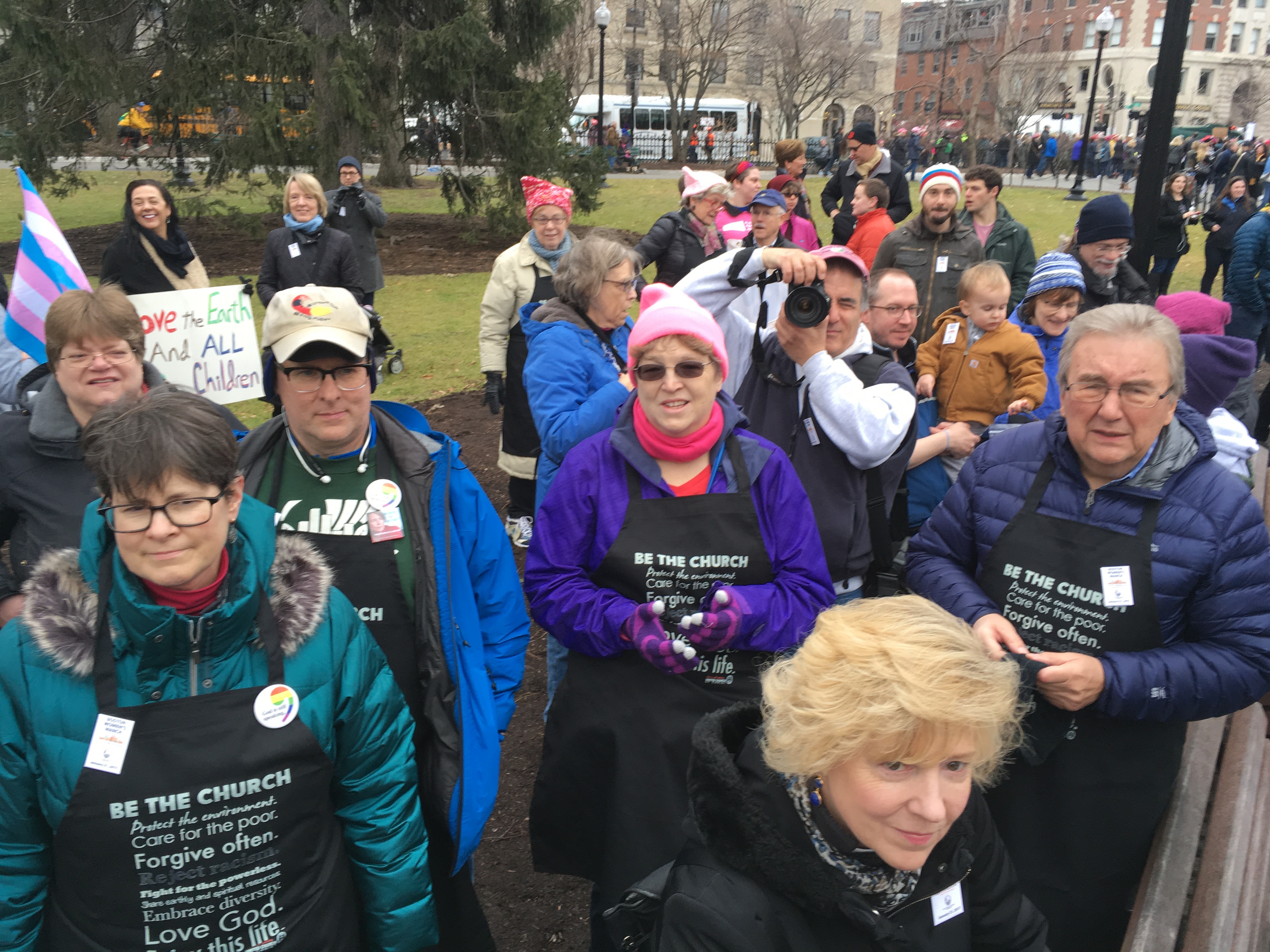 "A lot of people wore their 'Be the Church' aprons," said Rev. Wendy Vander Hart, associate conference minister, Massachusetts Conference, United Church of Christ, of the Boston event. "While watching on the sidelines of the March, a lot of people asked to take a picture of me in the apron — lots of thumbs up and smiles and a few requests about how to order them. In that way our witness was spread too!"

"Not everybody could get to our gathering spot and we were not able to stay together once the March started, but I think it was uplifting to be together," Vander Hart continued. "Before we left our meeting place, we turned to someone close by and named what we would do after this day so that it became a movement not just a moment. We held up blessing hands towards each other and prayed — 'God bless us, for this moment, for this movement, for your will in the world.'"

"I was moved, inspired, challenged, energized and blessed by the Women's March in D.C.," said the Rev. Rebecca Voekel, of Lyndale UCC in Minneapolis, who traveled to the capital with her family. "With my kindred all over the world, I'm ready to keep working religiously for justice!"

"I hope that people will hold to that feeling and keep showing up at marches, and building relationships, and speaking out," said Palatucci, "both to their elected officials and among their friends and families."

"For its shortcomings, Saturday's worldwide witness was historic and significant," said Sorenson. "Now comes the test. Now the hard work must begin. Now comes the painstaking, far less visible work of educating, organizing and mobilizing for systemic, institutional change on the local, regional, national and international level. Now is the time to forge partnerships, coalitions and networks for sustained, long-term changemaking. Now is the time for justice advocates to engage in all manner of decisionmaking forums, from school board meetings, to corporate board meetings, to newspaper and television editorial board meetings."

"The true consequence of Saturday's massive, global witness hinges on what we do as justice advocates in the days, months, and years ahead."