With roots in the UCC, U.S. Institute of Peace faces an uncertain future 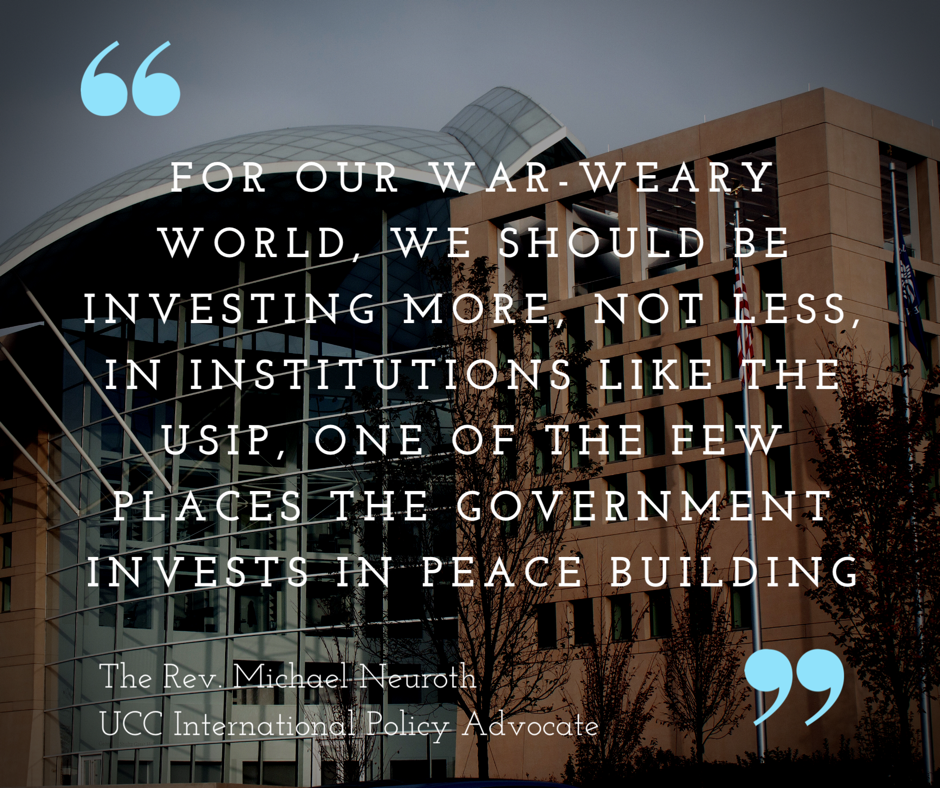 When the White House released a proposed budget for 2018, scores of progressive faith leaders from the United Church of Christ and beyond voiced their opposition to the potential cuts to human needs programs, such as Medicaid funding and social service programs that assist the poor — all while benefiting the military and high-income households.

But buried within the budget proposal, on page 104, is a suggestion to phase out the U.S. Institute of Peace within the next two years. The Institute of Peace, an independent institute founded by Congress in 1984, traces its roots back to the UCC — particularly the former members and pastors of Rock Spring UCC in Arlington, Va.

UCC leaders believe a move to shutter the USIP would be short-sighted, should Congress authorize it in a spending bill.

The Rev. Michael Neuroth, international policy advocate for the UCC's office on Capitol Hill, believes the Institute for Peace "plays a critical role in strengthening the peacebuilding work in the U.S. and around the world," he said. "The unique space USIP occupies between the government and civil society allows both policy experts and peace practitioners to come together and envision ways forward in some of the most intractable conflicts."

The former pastor of Rock Spring UCC, the Rev. Sid Lovett, served on the USIP Board of Directors in the 1980s, and believes it is second-to-none when it comes to peace-brokering. The USIP works to prevent, reduce and resolve armed conflict around the world, and also provides analysis, education and resources to agencies working for peace. It's teams of mediators and trainers — the "boots on the ground," as Lovett calls them — work in some of the most dangerous hot spots, including Iraq and Afghanistan.

"The State Department and the Department of Defense know that the Institute for Peace can provide the leadership they don't have for peace negotiations," Lovett said. "It has effectively and carefully put boots on the ground. They've created an amazing collection of experts."

Lovett credits Milton "Mike" Mapes, a former member of Rock Spring UCC, WWII veteran and foreign affairs scholar, for raising the money and helping push Congress for the creation of the USIP. "Mike ran the National Peace Academy Campaign and not only was he a member of Rock Spring, he was a personal friend — we both grew up in New Haven, Conn.," he said. "The Peace Institute would not be here if not for Mike Mapes, and what he did to keep the Peace Academy going... That's why I went on the board of directors [under President Reagan], in his honor and to keep his vision alive."

The administration proposes a cut in funding for the Institute for Peace to $19 million for 2018 (from $35 million in 2017) — mostly to cover severance costs — to no funding at all in 2019. On the other side of that, the budget proposal calls for an increase of military spending by about $54 billion — something Neuroth and peace-seeking advocates said is morally reprehensible given that it would eliminate the USIP, one of the few places the government invests in building peace.

"Through our Just Peace pronouncement 30 years ago, the UCC offered the audacious hope that 'peace is possible,'" Neuroth said. "For our war-weary world, we should be investing more, not less, in institutions like USIP to help us envision ways beyond military solutions."

The Rev. David Smock, a UCC minister and the Vice President of the USIP for 24 years, and said that it would be "very unfortunate" if the institute were eliminated. "It has a strong record of facilitating peacemaking in trouble spots around the world. It has support from military leaders, the State Department and various diplomats," Smock said. "It plays a critical role in mediating peace agreements and doing research, advocating and training and serving as a peace think tank."

"The USIP had strong church support, particularly the UCC, and also from other faith traditions," Smock said. "We worked closely with various denominations, and I think it's a natural for religious organizations to be supportive."

Lovett recalled that there were always elected officials and staffers on Capitol Hill who wanted to eliminate the USIP over the years, but each time that threat came about, former military, faith and nonprofit leaders spoke up in support. In 2011, former Marine General Anthony Zinni advocated for its funding, and just last week retired Army Lieutenant General Karl Eikenberry added his voice in a piece published in USA Today.

Said Lovett, "If [funding] is going to be cut in half, we need to push harder. I'm prepared to go back and start hustling again if we're in trouble."