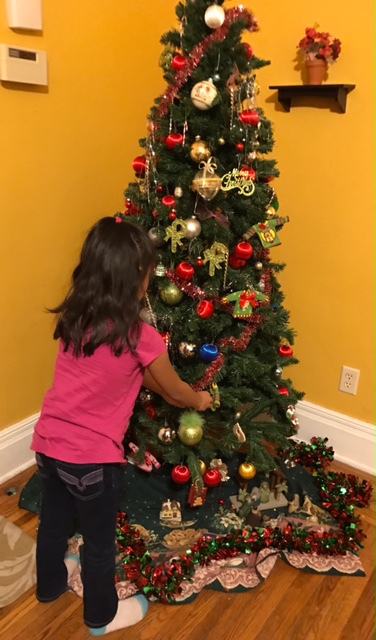 People of faith in a small Wisconsin college town have wrapped their arms around a young Guatemalan family celebrating their first Christmas in the United States, settled with the help of several local congregations, in an ecumenical ministry organized by two women from the First Congregational Church, River Falls.

"Lupe was a child bride who traveled 2,300 miles across Mexico, to escape extreme gang and domestic violence, with her children and the clothes on their backs. Since there was not a male in the family who could work and a child of two who needed to be cared for, Lupe needed a bit more hands-on help. And, it has paid off in spades," said Bobbie Kuhn who partnered with the Rev. Barbara de Souza to sponsor the family and bring them to Wisconsin.

Both women, members of First Congregational Church, have been instrumental in getting the mother and three children to River Falls and seeing to their resettlement, with widespread support from the area's religious community. De Souza, a former missionary who spent 40 years in the favelas of Brazil, was living in North Carolina when she reached out to Kuhn, an old acquaintance, in 2014, hoping Kuhn would join her in finding a way to bring refugee children detained at our borders into this country. Once Kuhn agreed, de Souza moved to Wisconsin in 2015, started taking Spanish language lessons to supplement her Portuguese, and eventually hooked up with an immigration lawyer who suggested an organization on the border that helped the pair find a family to sponsor.

After the family was identified in January, Kuhn appealed to the people of River Falls for assistance, lining up congregations of seven of the community's 12 churches that signed on as financial partners. The sponsoring congregations of several denominations in the town of 15,000 people formed the Ecumenical Asylum Committee (EAC) to cover the family's expenses. First Congregational agreed to keep track of donations, and the Wisconsin Conference of the United Church of Christ contributed a large sum to help seed the fund.

Before Lupe and her children arrived in River Falls one late night in February, the EAC found her an apartment. Kuhn got the kids into schools, and de Souza handled medical issues, setting up inoculations, finding a dentist and taking mom and the children to doctors' appointments. De Sousa, at 86, is the eldest of their American family, and sees herself as Lupe's 'grandma.'

"She is the age of my grandchildren and so for me has become a grandchild," said de Souza. "One day some time ago, she asked me if I had children and grandchildren. I said yes, and she asked me where they lived and when I told her they were scattered all over the USA and even in another country, she reached over and suddenly emotionally hugged me and called me 'Abuela' or "Grandmother.' She felt closer to me then because we had something in common, our family members were far away. So she has become part of my family—my grandchild!"

And with the help of their American family, the elementary school-age children and their mom from Guatemala are adjusting—to the colder Wisconsin weather, the strange food and customs, the English language, to school, and to church.

"Lupe has attended most of the churches that have sponsored her," said Kuhn. "Her children have been to many vacation Bible schools and chose where they wanted to go for Wednesday school themselves. Lupe has met with Father Jerry Harris from St. Bridget Catholic Church, to discuss First Communion for the children. Our new friends enjoyed a wonderful summer with parades, carnivals, ball games, birthday parties, picnics, and fireworks."

"Lupe has been here for nine months, and she is almost completely autonomous," Kuhn continued. "She walks everywhere, shops for bargains, calls us if she needs something such as a ride somewhere or something from the pharmacy. They have made a couple of trips to the emergency room, but she and her children live on $1,200 a month—$800 of which is rent and utilities—all paid for by generous donations from the local churches and their congregations."

The EAC meets monthly, and fundraisers, such as tamale dinners arranged by committee members, help meet the family's living expenses.  Scores of people from the community have offered their time and talents to help the family settle in.

"We feel so safe here, but my daughter has nightmares about being deported," Lupe said. "I tell her that Bobbie and Barb are helping us so we can stay here."

On October 17, an immigration judge, with the approval of Homeland Security's prosecuting attorney, granted asylum for Lupe and her children. On December 2, the young family received an early Christmas present, when the asylum approval documents arrived in the mail. The young family's deportation nightmares have been replaced by dreams of citizenship. And her Wisconsin neighbors are helping her celebrate.

De Souza took the oldest children to see Santa Claus and set up a tree that volunteers decorated. An anonymous donor sent bags and bags of gifts. Lupe chose a few for her children and hopes to send the rest to the Children's Hospital because one of her children spent months being cared for in a similar medical center for which she will always be grateful.  But she's looking forward to finding a way to support her family in the new year.

"I want to work," Lupe said. "I can cook or clean houses or sell Avon.  I would like to sell things when everyone is in school. I remind my children that we should be grateful for our new home but we won't have as much when we are on our own, and my daughter said that she is going to do well in school so she can get scholarships."

As the family becomes more independent, and the community sponsors acknowledge Lupe's wish to make her own way in the world, they promise they will always have her back.

"There are drivers and babysitters who are still interested in helping as needed, and teachers who keep Bobbie informed on what is necessary at school," said Kuhn. "The children speak wonderful English already and are translating for us. Our interpreter, her husband, and cousins are Latino and have become the aunts and uncles the children miss so much."

"This has been an experience of love—of increasing my family and having all of them close and watching them become independent as they settle in among us, her new family," said de Souza. "Bobbie and I feel rewarded for our victory of bringing this wonderful family to River Falls and seeing how this community joined in to make her resettlement such a success. Surely God is smiling as we are!"