A small Wisconsin church is making its mark in House Speaker Paul Ryan's hometown of Janesville, Wisc. doing what its pastor calls "humbling and amazing" work. Janesville United Church of Christ has not only voted to become an Immigrant Welcoming Congregation after a year of discernment, it is moving to put that decision into practice in its community.

"This church is taking courageous steps to practice a faith that is welcoming in an environment where it is not often the popular choice given the political currents," said Janesville UCC's pastor, the Rev. Tanya Sadagopan. "As the only UCC church in town, it is the progressive Christian voice in Rock County and is making a big difference in Janesville and beyond."

In a pretty conservative area, Sadagopan said, it is hard to be the church of social change. But that isn't stopping the people of Janesville UCC. 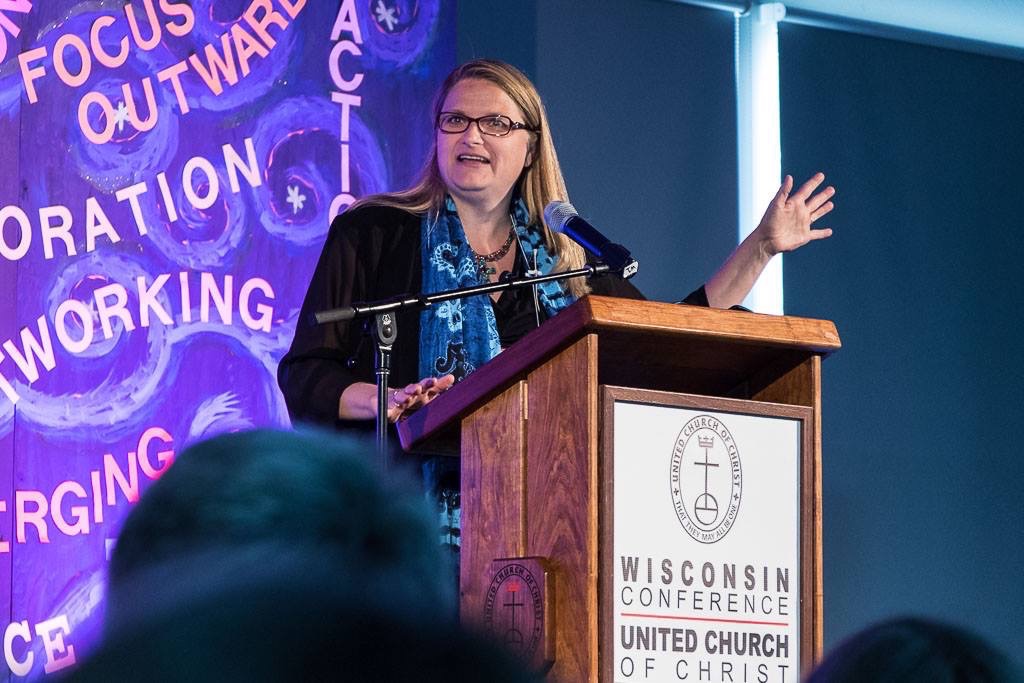 Sadagopan, who's been the pastor less than two years, noted that the crisis in Syria was the catalyst. In 2015, when images of the body of a little boy face down on the beach appeared in the news, the church outreach committee decided the congregation needed to do something. They decided to step out with who they are in response to immigrants and refugees. Their faith made that very clear.

"This is not a political issue," said Sonja Bagley, chair of the Janesville UCC Outreach Ministry, "but a matter of following the teachings of one God through discipleship and service."

"We are called as people of faith to live out the Christian message, to be Christ in the world," said Sadagopan. "Welcoming the stranger is extremely consistent with who we are. We are to stand with the least of these, and welcome them."

The congregation started a "Love over Fear' campaign in January 2016 and reached out to establish a relationship with the local mosque. The two worship communities participated in a Longest Night service together. But the Janesville UCC folks wanted to do more.

So church members started studying and listening and leading. Despite the stances of their governor and their state representative, leaders who Sadagopan said "initially wanted to extend a welcome to immigrants before they pulled a 180 and started condemning them," the congregation decided to step out on faith.

In the summer of 2016, the Janesville UCC outreach committee coordinated a strategy to become an immigrant welcoming congregation after participating in discussions around the issue at the Wisconsin Conference UCC annual meeting. The conference is now in discernment around becoming an Immigrant Welcoming conference, which involves a year of study by other local congregations that began in August. Janesville UCC members plan to continue the effort by leading a workshop at the conference meeting this summer, hoping the issue may be addressed with a vote.

Janesville UCC added action to the mission of becoming an immigrant welcoming church, selling lawn signs that state 'Wherever you are from, you are our neighbor.'  They hosted a series in Advent, 'Our journey to Bethlehem,' on immigrants, using stories out of the scriptures of First Isaiah. In December, a Children's pageant that celebrated Christmas around the world ended in a Syrian refugee camp, with real images of what life is like there. Church leadership held listening sessions throughout the process, and encouraged all other voices to share their views and their concerns. Their final listening session took place in late January, just after Trump's first travel ban.

And the day before their vote as a church, the congregation was well-represented at a local event that spoke to them.

"A rally was planned, a NO Ban NO Wall rally," said Sadagopan, "I was invited to speak from a perspective as a minister with a church about to vote the next day to be an immigrant welcoming congregation. It was a no brainer — our faith makes it very clear. I can go anywhere in the scripture that we are called to extend hospitality and to show that the refugee and the alien is to be treated as a citizen in our land. A third of our Sunday attendance showed up."

When the congregation voted to accept the immigrant welcoming resolution on Sunday, February 5, the decision was overwhelming. Among about 100 people, there were two dissenting and one abstention.

The church is now rolling out several initiatives to make it real, introducing a 'Radical Hospitality' project. In the implementation stage, the congregation is resourcing low-income and undocumented immigrants in the local high school, in an effort to work with them so they can complete their education and be successful. A $1,000 Radical Hospitality grant from the Southwest Associations of the Wisconsin Conference will help them buy books, clothing or pay for transportation.

Janesville UCC is planning a panel discussion on immigration later this year as a community service, hoping to encourage the same type of thoughtful listening in their town that led to their immigrant welcoming declaration. They are vetting speakers now. The congregation continues to tend the ongoing partnership with mosque members, and is actively pursuing a plan to resettle refugees in their community. It is a concept that is not new, since the Janesville church has previously helped resettle refugees from Bosnia and Southeast Asia in the 1980s.

"This church is taking the lead in a courageous conversation on immigration and faith," said Sadagopan. "On an issue of immigration that is unpopular (here). It puts them at risk, putting their faith into practice when it is not easy to do so."

Immigration will be one of the topics at this summer’s 31st General Synod in Baltimore. A resolution, if adopted, will encourage the denomination, its conferences and its congregations to become an immigrant-welcoming church by recognizing the struggles of migrants and refugees fleeing for safety and freedom, and for the wider church to advocate for policy that welcomes immigrants to the United States.