Wisconsin church welcomes neighbors to take from the Blessing Box 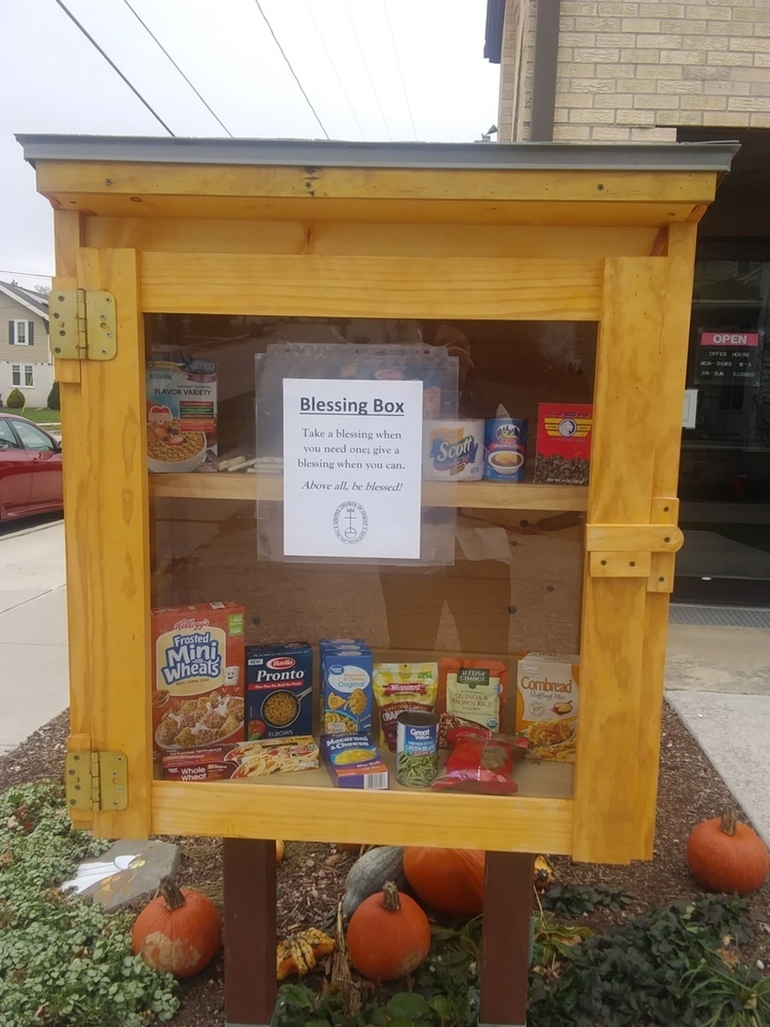 A small church in Wisconsin 36 miles south of Green Bay has a built tangible sign of love of neighbors right outside their front door. It's a Blessing Box, which holds a plethora of food, hygiene and clothing items available for the taking, a gift from Ebenezer United Church of Christ in Chilton to members in need in their community.

The box, with glass doors and deep shelves stocked with household necessities like paper goods, cereal, soup and spaghetti, has been in place since late September. Stephanie Adamietz, an Ebenezer UCC member who suggested the box idea to others on the Evangelism Committee after seeing one on TV outside a church in Green Bay, said she spearheaded the project because, "it would be a great way for us to help those who may not have the courage or means to get extra help."

"The idea of the blessing box has gone over pretty well within our congregation because it doesn't require members to give a large dollar amount or make a large commitment to the church — it's just what they can afford," Adamietz said. "This allows members to add a simple box of mac and cheese or noodles to their regular grocery shopping trip."

"I have never seen anybody take anything out of it—but obviously, the goods are being used," said Jackie Kempf, the church office manager. "Parishioners are doing a pretty good job keeping it stocked. People in the community are now asking if they can put things in ... if they go to the store and stock up on sales, can they put the extra soup or whatever they pick up in the box. I took two calls just last week. We encourage folks to add to the box whether they belong to the church or not."

"Based on what I've seen, diapers seem to get picked up really fast," Kempf continued. "Toilet paper, that's been another big one. Items that can be taken and used right away go the fastest."

"It’s a tremendous thrill," said the Rev. Mike Stafford-Kennedy, Ebenezer UCC’s pastor. "Every morning I look in that box to see what’s changed. It’s a great feeling to know the community is using it." 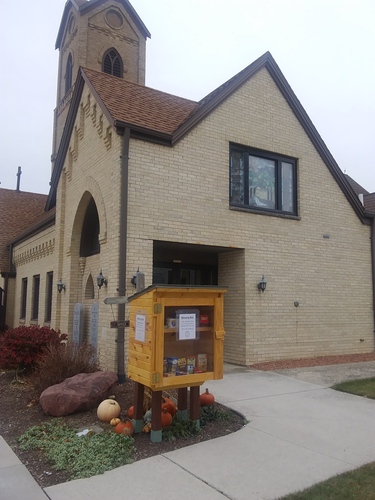 Adamietz indicated the box's design "was based off the concept of the little lending library houses we see around town, just bigger," she said. "For my family it is a great way to give to our church without dropping the kids lunch money for a month. I believe this blessings box will be around for a long time as there will always be a need for people to get a little extra help."

Right now, Ebenezer UCC members are refining their offerings. In addition to non-perishable food, socks and gloves may find their way onto the shelves of the unlocked box. They also intend to get an actual sign for the Blessing Box that will weather the elements.

"We've been trying to put things in there that don't need any additional ingredients," Kemper said. "Most people have a microwave, so things that you can put in a microwave seem to go quickly. Popcorn, noodles. Macaroni and cheese is great but you need butter and milk, and a stove. We've also been trying to avoid things that freeze, since we are in Wisconsin and it's cold."

Pastor Mike said, "Our neighborhood is in transition and we struggle sometimes to figure out how to live out the second part of the greatest commandment — to love your neighbor as yourself. We started to look around to see what was needed, how to reach the people in our area. We decided, 'let’s focus on serving the neighborhood first.'"

"Our little church was on the brink of closing the doors not so many years ago," Adamietz said. "We see what it was like to be in need, so I think it is a great way to show the community and our members that everyone is in need at one point in their life. Everyone matters! We do not judge what brings them to our door — we just give in good faith."

The Blessing Box is also giving something important to the people of Ebenezer UCC — unity and a sense of purpose. "Everybody in the church is excited about it," said Stafford-Kennedy. "It's so heartening to see the congregation rise up like this."