'Why I Protest' coming soon 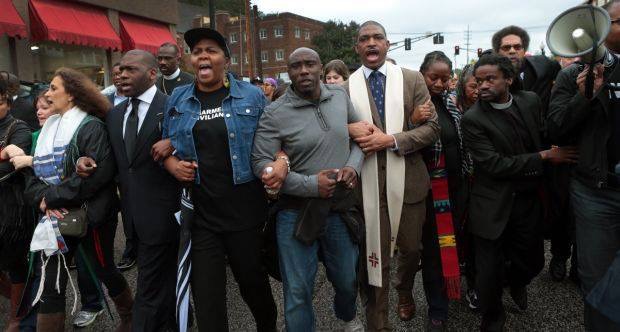 The deaths of Tamir Rice and Michael Brown — young African Americans who lost their lives at the hands of police — have escalated the conversation about racial discrimination in this country.

The voice of the United Church of Christ, which has been prominent in the conversation, is about to get louder.

This voice belongs to the new leader of the United Church of Christ Justice and Witness Ministries, the Rev. Traci Blackmon, who began as executive minister last week. Rev. Blackmon, a prominent civic leader, gifted preacher and much-loved pastor and teacher, is featured in a soon-to-be-released video, titled, "Why I Protest," which will be viewable and available for distribution on the eve of the Martin Luther King, Jr. holiday.

Blackmon, the first female pastor at Christ The King UCC in Florissant, Mo., is well known as a leader for racial justice. She's become a strong voice for civil rights in this country, named to the Ebony Magazine's Power 100 list in 2015 for taking a stand against police violence in Ferguson, and for her work on the Ferguson Commission. One of the leaders of the Black Lives Matter movement, Blackmon will make a statement of solidarity with the movement on behalf of the United Church of Christ leadership.

The two minute video, the first of 12 multimedia campaigns in 2016 tied to the UCC core mission, will be released at 9 p.m. Sunday, Jan. 17, on the UCC Facebook page, and at 7 a.m. Monday, Jan. 18, on ucc.org. It will also be accessible on Twitter (@UnitedChurch), and on YouTube.