White clergy in NE Pennsylvania atone for racism, pledge to ‘tear it down’

A diverse group of religious leaders in Northeast Pennsylvania came together in Allentown Thursday, June 11, to tear racism down. In an afternoon of lament, repentance and promise, white clergy shouldered some of the responsibility for being complicit in anti-blackness, atoned for their failure to act against discrimination, and pledged to use their voices to effect change. 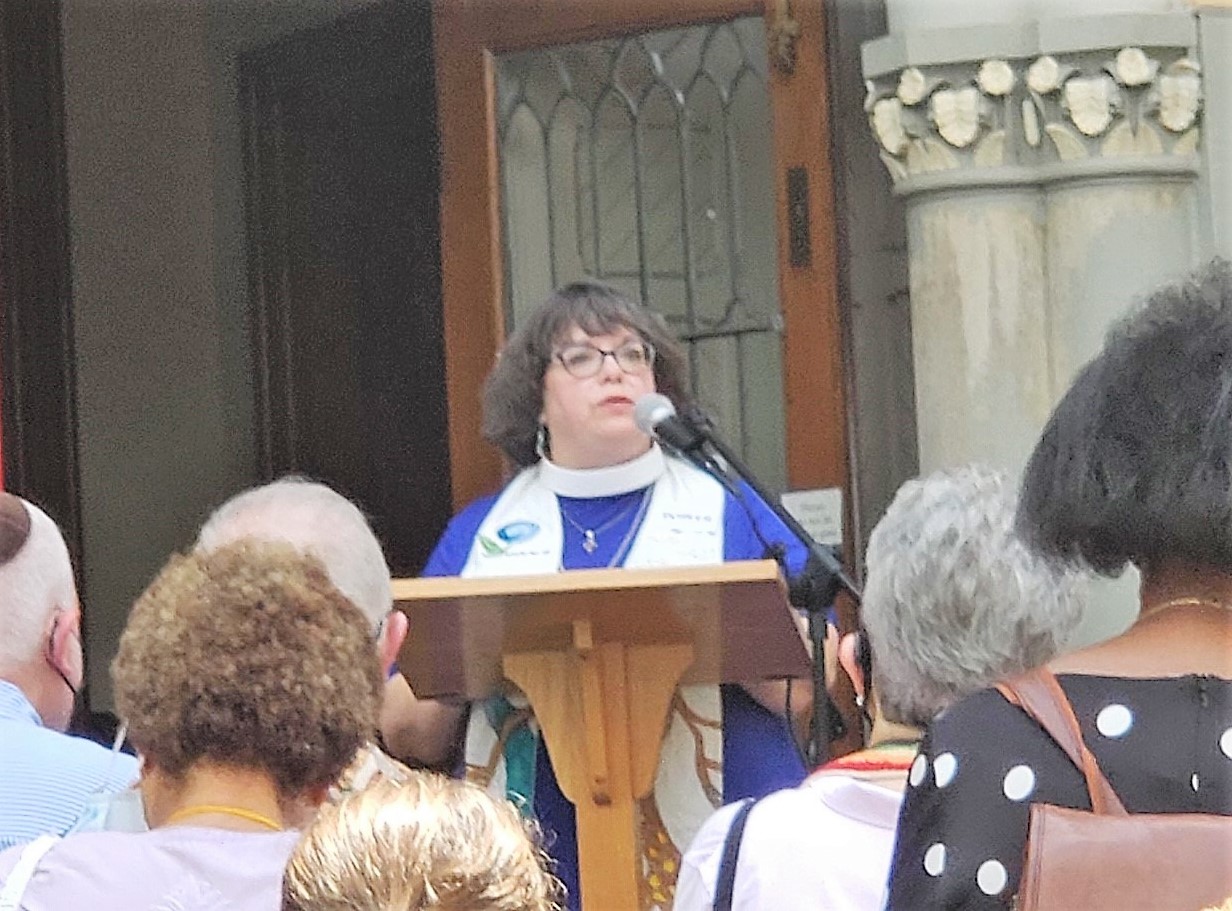 “For us, the major part was the confession that we have not done enough to dismantle systems of racism and white supremacy,” said the Rev. Bonnie Bates (right), Conference Minister, Penn Northeast Conference, United Church of Christ. “A big part of it belongs to us. To white clergy and to Christians, because we created the systems. And we perpetuate them, because it’s easier to be silent about them. But it’s not healthy.”

Bates and 15 pastors of UCC churches in the Lehigh Valley came together in the interfaith group of 60 clergy from Christian, Muslim and Jewish traditions. The religious leaders were joined by more than 100 others, who came out to march through the streets of their community in a joint call to action. They pledged to speak out against racism, lead their congregations to confront it, and work to transform our systems of policing, criminal justice, immigration and mass incarceration.

They gathered early afternoon at Resurrected Life Community Church UCC, a primarily black congregation that joined the denomination last May. After a welcome by church pastor, the Rev. Gregory Edwards, the Rev. Emily Garcia Livingston, pastor of St. John’s UCC in Allentown, set the stage. The two ministers, Edwards as director and Garcia Livingston as chair of the clergy caucus of POWER Lehigh Valley, are heavily involved in the interfaith social justice organization that promoted the event. She introduced Darian Colbert, a youth pastor and founder of Cohesion, a local group that focuses on helping kids develop self-worth and strong character.

“One of the things that give us power is the power of what we say. Words can build up or tear down,” Colbert said as he offered a grounding prayer. “I am a follower of Jesus. When we walk through here, we are going to thunder through these streets. In this city there is a spirit of racism that says I am going nowhere. It needs all of us to tear it (racism) down. Exercise your voice. We have that power, we have that voice. … We is greater than me.”

Practicing social distancing protocols, the participants marched to Zion’s Reformed UCC, a primarily white congregation and the “Liberty Bell” church. Zion’s played a role in the founding of our country, safeguarding the nation’s most famous symbol of freedom. They passed sites where a number of African Americans have recently died as a result of gunfire. UCC pastors took lead roles in the procession, which POWER helped organize. Chanting “Black lives matter” as they walked, the advocates pledged to build something new. 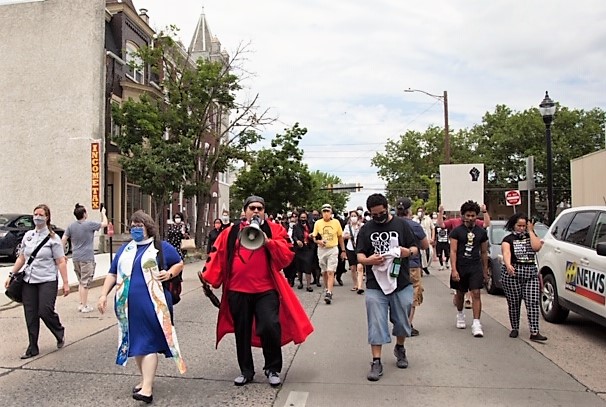 “We’re done dying by folk who won’t educate us … by police who won’t protect us … politicians that placate us. … Doing all the right things does not protect black people from the weapon of whiteness.” He referenced their location, where, during the American Revolution, “the Liberty Bell was being hidden from the British while liberty was being stolen from us.”

The Rev. Canon Dale Grandfield, Church of the Nativity, Episcopal, in Bethlehem, said he recognized that he was “addicted to whiteness,” as he spoke about embracing the European religious tradition that became a way out for a gay boy. But little did he know that these churches were built on the backs of others. “And so I call on you my white friends to join me for the long haul. Put your skin on the line.”

“You don’t need to be in ministry for very long to see racial injustices occur,” said the Rev. Becky Sausser, pastor of New Bethel Church, UCC, in Kempton. She told the story of when she was a pastoral intern elsewhere, and a black child, not yet 3 years old, was singled out as a “problem child” in an otherwise all-white preschool and church. And she said nothing. “I’m sorry that I didn’t speak out then. … I received a very good seminary education, but it was in some ways too short-sighted. … I am ready to learn to do justice.”

“Silence in the face of evil is itself evil,” said the Rev. Brandon Heavner, pastor of Bethlehem’s St. Mark's Evangelical Lutheran Church. “We can’t hide behind our pulpits anymore.”

Bates spoke about being long-versed in diversity training, only to have “her heart torn open” on a visit to civil rights memorials in Alabama with her Conference Minister colleagues in November.

“As a white woman, I knew I had advantages but I had never felt the weight of responsibility for those advantages that I needed to carry,” she said. “I stand before you now as a woman whose heart continues to break every day, but who also knows that my work in only beginning. I have to continually work on my own racism.

“I call on my white clergy and Christian colleagues to do the same. We, we white folk, are the problem. Our racism and white fragility and white privilege and white supremacy are the problem. Please, God, let us be willing to take up this work and dismantle the oppression we have continued.”

The clergy of color thanked the white speakers for acknowledging they have been complicit in repression of non-whites. All pledged to fight for change together.

“We who claim to know God, who claim to have a relationship with the creator of humanity, regardless of our color, have a responsibility to justice with all of humanity,” said Rev. Benjamin T. Hailey, of Union Baptist Church. “But today … we say today we are holding you accountable. … We’re holding the white church accountable. … Our hearts have always been outstretched. … Today begins the dismantling our white supremacy, right here in the Lehigh Valley.”

“If you can’t tell the truth in your dinner table at Thanksgiving … in your church board meeting … you won’t be able to tell the truth in public,” said the Rev. Mark Tyler, senior pastor, Mother Bethel AME Church in Philadelphia. “Will you go from marches to real significant change?”

In a letter of confession and action, the white faith leaders pledged to call other colleagues to “uproot theologies and practices that promote or accommodate interpersonal, structural, and systemic racism, and replace them with life-giving ways of making meaning, building relationships, and reconstructing just systems and structures.

“Together we will go on a journey of transformation,” the letter reads, “to ground ourselves in the deep truth that our own liberation and wholeness are woven into the larger struggle for racial justice. We will sojourn in deep solidarity with Black, Brown, Asian/Pacific Islander and Native clergy and faith leaders to embody the beloved community.”