What it means to be a refugee 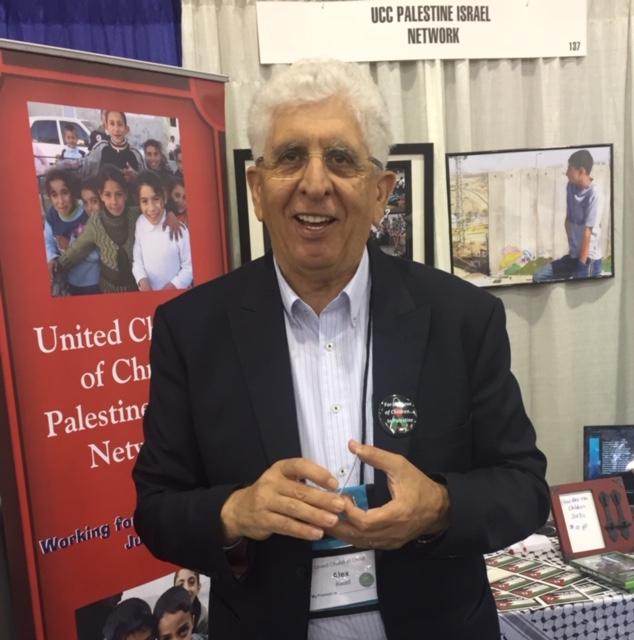 Alex Awad, Palestinian American, became a refugee at age two, in 1948. “I cannot go back home,” he said. “I cannot live in Palestine today.” His father was shot while leaving for work during the Nakba, a period when Palestine was depopulated through ethnic cleansing. As violence and flight surrounded the family home in Musrara, Jerusalem, his mother took her children and fled.

“My mother’s idea was never look back, always go forward, never hate.” Alex remembers a woman of deep Christian faith, and tremendous strength and determination. She entered nursing school and used the training to support her family of seven children and a mother-in-law. However, to complete her education, she had to put all of the children into orphanages. To connect as family, they gathered on weekends and holidays.

Awad came to General Synod to talk about his own experience, and to encourage UCC delegates and visitors to recognize the global crisis affecting refugees in the State of Palestine and other countries. He spoke to groups in the Exhibit Hall about global forced migration and the resolution of witness under consideration that calls upon members of the United Church of Christ to learn more about it and to advocate for the rights and dignity of displaced people.

What does it mean to be a refugee?  Awad says “you lose everything!” You go from security to not knowing what the next day will bring. “We had the trauma of going from a house to living in one room, with one mattress for eight of us.

“Refugees feel the emotional impact of living with nothing, and always remembering what it was like before.”  Awad also said refugees also lose their claim to a place, a piece of identity.  “Because we lived in an occupied part of Jerusalem, we didn’t qualify for visas, only UN ID cards. I became a man without a country.” He eventually became a U.S. citizen, and could only go back to Jerusalem as a visitor.

Because of his mother’s sacrifice, Awad and his siblings were educated and able to build lives outside Palestine, but Awad feels a deep connection with refugees in Palestine. “They have been refugees for more than 70 years. How can this be? And the number of refugees is growing, as Israel takes over more and more Palestinian territory.”

Awad served the General Board of Global Ministries for the United Methodist Church before retirement and now hopes to offer his insight to communities of faith about the plight of refugees, from someone who lived the experience.

Alice Foltz, a Synod Newsroom volunteer, is a member of Wellspring UCC in Centreville, Virg.