As wind-whipped wildfires continue to take lives and destroy forests, homes and businesses on the West Coast of the United States, United Church of Christ congregations are in stages ranging from evacuation to recovery to post-traumatic stress syndrome. 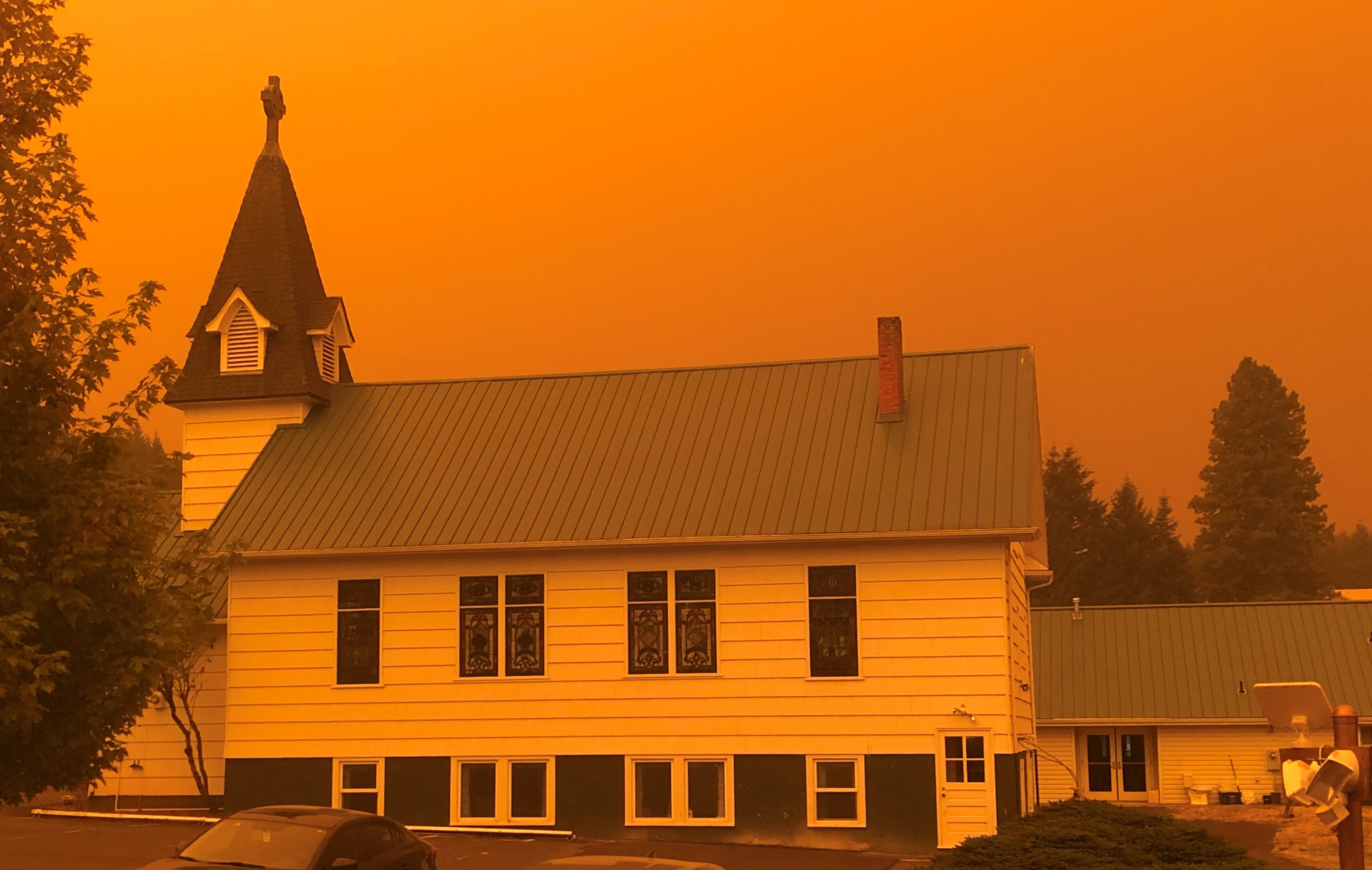 In the two hardest-hit UCC Conferences – Central Pacific and Northern California-Nevada – several congregations and church camps await word on the fate of their buildings. Others, evacuated days or weeks ago, are ministering to families and communities that escaped damage or are returning to inspect it. Daytime skies range from smoky gray to eerie orange to black as night.

“It feels like the whole coast’s on fire,” said Pastor Kimberly Williams of Grace Community UCC in North Fork, Calif., which got evacuation orders on Sept. 6, her first official Sunday as pastor. In affected areas, “it’s terrifying,” she said. “Everybody is looking out their windows with this look of horror, but then realizing, OK, this is the reality, we’ve got to keep on going.”

Amid it all, pastors say they value how colleagues are checking in on each other, offering mutual support, advice and prayer – a response borne of years of relationship-building within each Conference and with the wider church.

At this writing, Oregon faces the most continuing damage and danger to population centers, with 10 deaths and 22 missing persons reported statewide as of Monday, Sept. 13. “Right now, we're in the shock-and-awe phase,” said the Rev. Tyler Connoley, Conference minister in Central Pacific. “Lots of members displaced. A few have lost homes, but no injuries that I've heard about. A couple churches and our camp are still in danger, but so far untouched.”

Southern Oregon has been especially hard hit. There, fast-moving flames ravaged 3,200 acres and several communities Sept. 7, killing two people and destroying some 600 homes and 100 businesses, many in the small towns of Talent and Phoenix, between Ashland and Medford, where two UCC congregations are aiding relief efforts.

“One chaplain in Medford lost his home, and our pastor in Medford was in a neighborhood that burned, but thinks from some photos she saw on the internet that her house is still standing,” Connoley said.

“I am maxed out keeping track of the things that are most immediate,” said the Rev. Laura Lee Kent, pastor of Medford Congregational UCC. “What I can share is that this is awful and people are so amazingly generous, kind and strong.”

Congregational UCC in Ashland, on its Facebook page, posted links to an online signup “for help and helpers” and to a preparedness-and-recovery portal “for all info. related to fire recovery, from important hotlines, to resources needed, to offers of help and support.”

Farther north in the state, three separate, uncontrolled fires in the Cascade Mountains merged the week of Sept. 7, destroying rural villages and forcing evacuations of thousands of people from small communities and and larger suburbs between Portland and Salem.

In one of them, Beavercreek UCC (top picture) is surrounded by berry and tree farms, pastures and woods. Its congregants come from nearby tiny towns and larger Oregon City. All have been either evacuated or placed on high alert at various moments over the course of recent days.

“I and others have been obsessively watching updates on maps as the fires grow, merge and come closer,” said the Rev. Jennifer Seaich, Beavercreek pastor, referring to a link at the Clackamas County website. A few church members had to leave their homes Sept. 8. The next day, “members from a couple miles up the road were evacuating,” Seaich said. “Power went out for everyone on the other side of the church. We had several members come to the church to fill jugs of water – with a well, water pumps don’t work with no electricity -- and to charge their cell phones.” 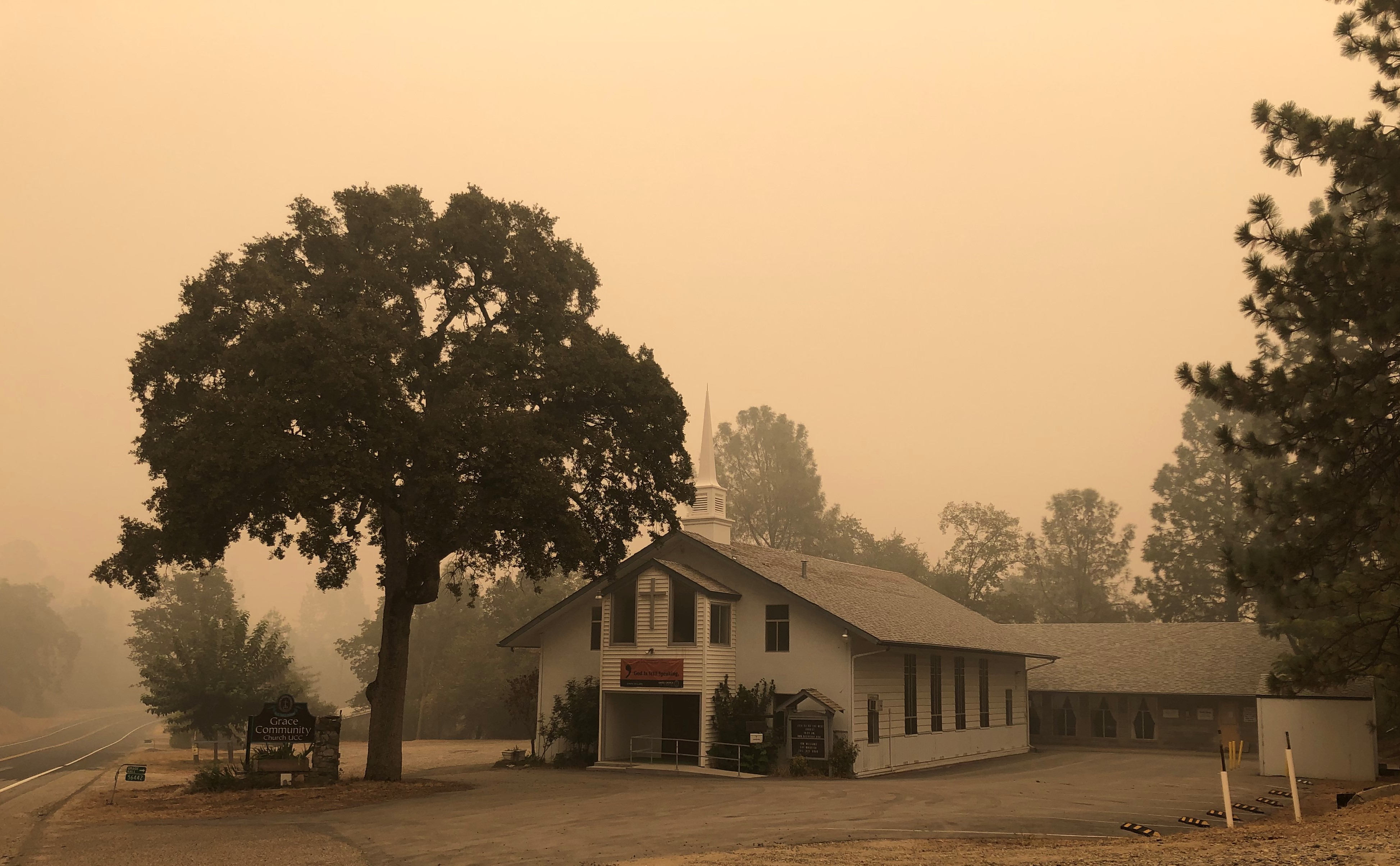 By Thursday, Sept. 10, nearly half of the 70-member congregation had evacuated. “We don’t know if anyone has lost their homes yet,” Seaich said. Members checked on each other via email, text and phone calls, she said, and “our church food pantry team was making plans to take water and snacks to firefighters.”

Yet further north, in the Pacific Northwest Conference, 80 percent of the town of Malden, Wash., burned, though Malden Community Church, UCC, escaped with singed siding only, said the Rev. Michael Denton, Conference minister.

Crashing with relatives, friends, despite COVID

In Northern California-Nevada, “you could probably call just about any church in the Conference and they will have a story, and they will also tell you they don’t have it as bad as other churches or places,” said the Rev. Diane Weible, Conference minister, on Sept. 9.

“This morning we woke up to orange sky as the sun rose and it has been so dark here ever since. I needed lights in the house until noon because the smoke is not letting any sunlight through. That is pretty much the story for the whole Bay Area, although the biggest fires are both further away.”

From North Fork in the Sierra Nevadas, members of Grace UCC (the church building is in the second picture from top) evacuated to nearby mountain towns or to California’s Central Valley, Williams said. A UCC Member in Discernment and a second-year student at Pacific School of Religion, she had done several months of supply preaching at Grace before serving  her first Sunday as a called pastor on Sept. 6. So she knows  the church’s people but was still tracking down who evacuated where throughout the week.

“There are a lot of people from these communities smashed into one-bedroom houses with a relative or crashing at a friend’s house. The generosity of people opening their homes at a time of pandemic – it’s scary, and it’s wonderful. If people didn’t have accommodations, we were going to open up fellowship hall at First Congregational Fresno, which has air conditioning” – though that had not yet happened at last update.

Near Shaver, Calif., a small work party at the Conference’s Camp Tamarack evacuated on Sept. 5, said Camp Manager Wade Hobson. An approaching fire didn’t initially make it into the camp that weekend, he said, thanks in part to several years of initiatives by the U.S. Forest Service, the Federal Emergency Management Agency and $3,000 to $4,000 per year invested by the Conference in forest thinning and “fuel reduction.”

On Sept. 12, though, Hobson saw reports of a spot fire possibly popping up near the camp again. He hopes for word later this week on whether it got into Camp Tamarack  and whether there is any damage to its lodge, two cabins, 10 tent platforms and a shipping container filled with bed frames, mattresses, cots, dining tables, tools and lumber – or maybe just to the RV near the camp entrance, where he stays during the summer. 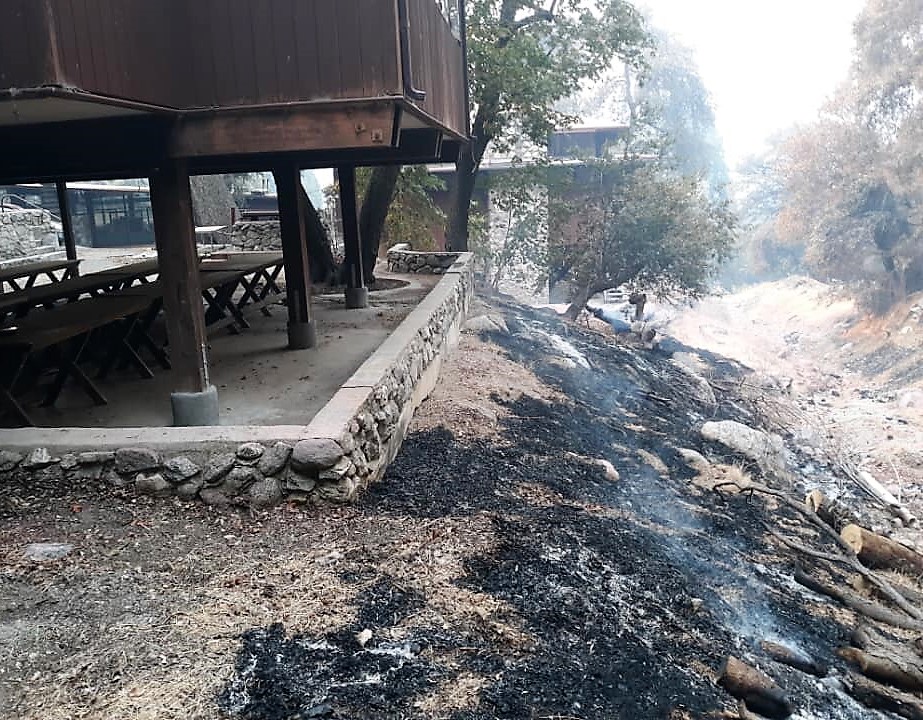 In the Southern California-Nevada Conference, local firefighters and volunteers stopped flames Sept. 7 just at the edge of a lodge at Pilgrim Pines (third picture from top), two hours east of Los Angeles. In the Pacific Northwest Conference, the high winds on Sept. 7 and 8, which kicked off many of the fires throughout the region, did minor wind damage to Camp N-Sid-Sen near Harrison, Idaho.

Central Pacific is still awaiting word on whether one of the Cascade Mountains fires reached Camp Adams, near Molalla, Ore.

All of it creates a further disruption of worship and outreach that have been altered for months by the COVID-19 pandemic – and creates ministry concerns above and beyond the fires.

Breathing issues caused by smoke is one of them. The air quality of Portland, Ore., for example, was declared the worst of any city in the world on Sept. 11. This has Conference ministers and pastors seeking information on things like smoke exposure and immune responses. “Between the timing of the smoke, flu season, and COVID, I'm concerned,” Denton said.

Another is the psychological effect on individuals, congregations and communities as they evacuate, return and try to keep track of each other.

“We had a few families who were evacuated,” said the Rev. Andrew McHenry, pastor of First Congregational UCC, Oroville, Calif., on Sept. 11. “I haven't been able to get ahold of all of them yet. In all likelihood they're somewhere safe with loved ones, but it will be assuring when we finally do make contact with them. All the others that I know of are safe and well.”

That congregation and other Butte County residents face their second serious fire threat in less than two years. “Having lived through the Camp Fire (which destroyed Paradise, Calif., in 2018) and its aftermath, I can say that all this pushes our PTSD buttons a bit: the orange sky, the smell of smoke, scrambling to put together travel bags, loading up the car just in case, seeing a layer of ashes on our cars and driveway, etc.,” McHenry said. “But we're a good bit west of all the evacuation zones. … All of us will be glad when this part of the year is over and the rains come.”

“Among the comments I hear are a lot about the cruelty of 2020, a few on where is that Oregon rain when we need it, and a lot of discussion of how we humans have to do better, quickly and drastically better, on climate change,” said Seaich.

“The thing that has really stood out to me is the way the clergy, in a disaster, really reach out and care for each other,” Williams said. “I had phone calls with people checking what our needs are, letting us know they’re praying for us, asking what help we need. You can get to feel isolated in your church, doing your work. And then to recognize you’re connected.

“As a soon-to-be-clergy, how we’re connected denominationally has been a huge theme for me.”

In a message to the Central Pacific Conference, Connoley responded to questions about where to send donations: “For now, I ask that you take collections in your home church, and hold onto the money until we know where it can be best used. I've talked to our Moderators about setting up a fund in the conference, but we need to make sure we do this in a way that will do the most good.”

UCC Disaster Ministries is monitoring the situation and has set up a 2020 Wildfires relief fund, found here.

“Remember that the UCC responds to a natural or human-made disaster once every three days through our Disaster Ministries and One Great Hour of Sharing,” Connoley told the Conference. “Those systems are in place because of the money you gave in the past to prepare for just such a time as this.”

“In the coming weeks, there are going to be many, many opportunities to help those affected by the fires,” Denton wrote. “COVID has already made communities, families and individuals more vulnerable, and now this. Pray for all those people and creatures affected as well as the earth itself. As the requests for giving come, give what you can. As the requests for advocacy come, participate. We can best do justice, love kindness, and walk humbly with God, together.”