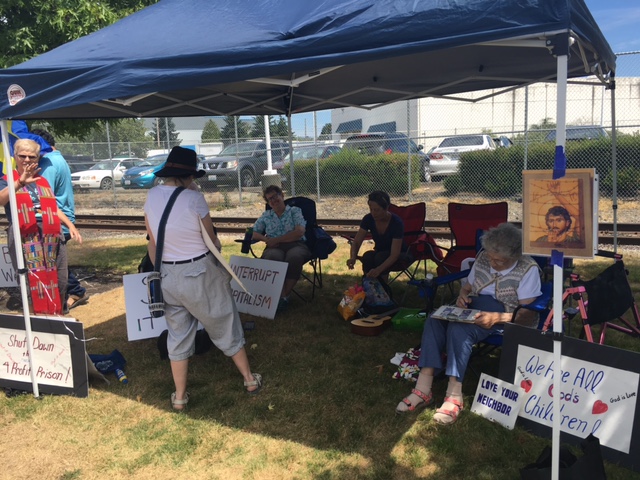 On the second Sunday of the month after worship, a half-dozen women from an Olympia, Wash., congregation have committed to spending an hour in the car to devote a few more hours sitting along a grassy strip outside the ICE Detention Center in Tacoma.

The women, members of The United Churches of Olympia, plan to commit several Sunday afternoons to this vigil. They set up a canopy and chairs, and armed with signs and snacks, they show support and love of their neighbors – for the people held in the detention center, and for the family and friends who come to visit.

"Our goal at the vigils is to show solidarity with the folks inside," said Leslie Cushman, UCC moderator for United Churches of Olympia. "We schedule the vigils to take place on days when there are visitation hours for families. We provide a place to sit and visit. We offer snacks and drinks."

And they listen. To the stories and the heartbreak of those impacted by the current administration's immigration policies. Stories that come pouring out when family members of those detained start arriving for visits at one o'oclock, and see them sitting there. 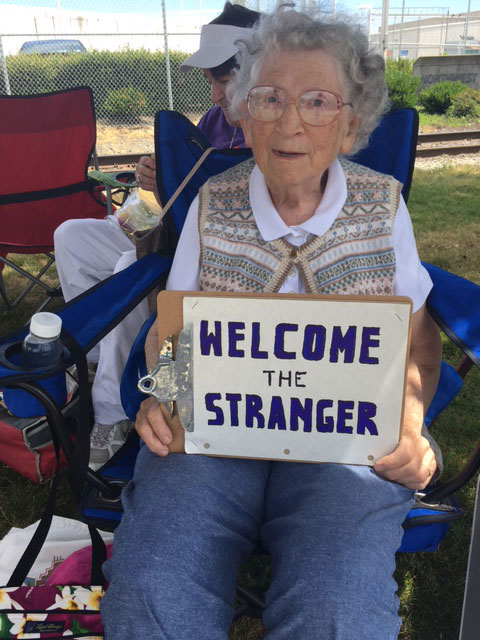 "Three relatives of three different prisoners came to us with needs," said Ruth Shearer, one of the mission's organizers. "One needed to blow off steam and be listened to over the unreasonable imprisonment of her husband, an Italian business man who had overstayed his visa by two days when they reached the Canadian border. Another needed to talk with someone (in Spanish) while waiting for his wife to visit her son. The third needed something to put over her sleeveless black dress because the prison wouldn't let her in without covering her shoulders on a hot, summer day! It was soon clear that we have a greater mission — to serve the families of those inside."

The need for this ministry of love and compassion became evident when seven ladies of the federated church, part of the Presbyterian Church (U.S.A.) and the United Church of Christ, took their first trip to the detention center on July 9, armed with signs protesting the treatment of people picked up and detained by Immigration and Customs Enforcement.

So when six ladies went back on Aug. 13, they took extra clothing, more welcoming signs and set up in the same place.

"This time I took a small folding table to display items for the families and a sign 'Can We Help?' taped to the edge of the table," said Shearer. "A Hispanic woman stopped and wanted to talk, so we offered her a chair and group of listeners. She poured out her heart about her son who had been in the U.S. since he was three years old and is now in the detention center facing deportation to a country he has never known. She got her citizenship long ago but didn't think her children needed it then. A nephew whom she had helped a lot when he was young reported her son to ICE!  She felt double-crossed and very hurt by this action. Her son is in his thirties and on chemotherapy for cancer!"

Shearer gets emotional just thinking back to the conversation.

"Our guest was glad her son was continuing chemotherapy," she said. "I certainly hope this man is getting his treatment on the proper schedule for maximum effectiveness. I was an R.N. before going to graduate school and earning a Ph.D. in molecular genetics. Now I'm 87 and just an old woman who still cares about people." 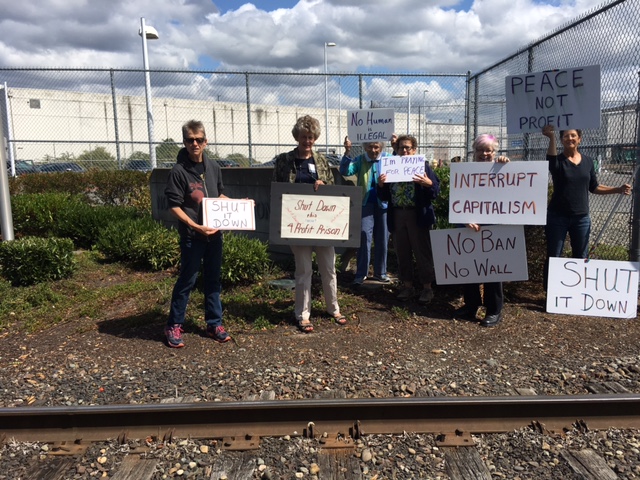 "Our guest stayed for quite a while, crying intermittently," Shearer continued. "I gave her a new pocket package of tissues. When she finished, she got up and smiled as she thanked us and hurried off to her car. She was a strong woman who just needed someone sympathetic to hear her story. This makes it worth our time to be there."

"Our signs and presence is a witness," said Cushman. "The group Northwest Detention Center Resistance (a grassroots movement led by undocumented people that works to end the detention of immigrants and stop all deportations) has asked groups to 'adopt a day' and hold space. That is what we are responding to. We have chosen to defer to the requests of impacted persons, and not invent the solutions or actions."

"The detention center is a classic for-profit operation that makes money at the expense of the human rights of the individuals," Cushman continued. "There are regular vigils at the detention center, depending on the situation. There have been hunger strikes going on regularly, lock downs, and other incidents. Our church decided to get involved in this as a way to show solidarity." 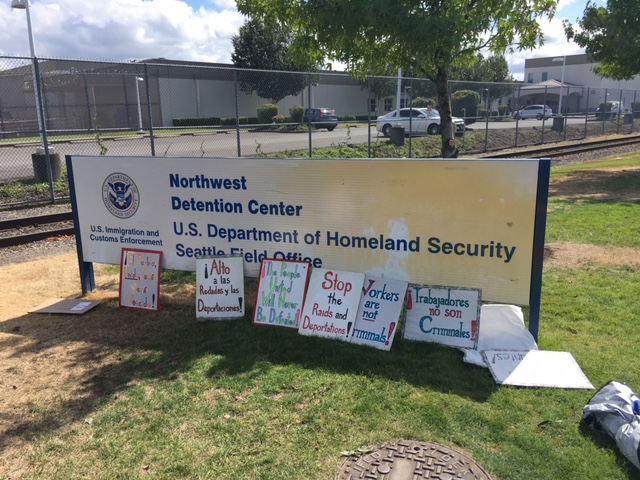 "We feel called to do this because we feel it is immoral to have for-profit prisons," said Shearer. "ICE sometimes deliberately separates family members to different prisons, and deports parents of American-born children without providing for the children. Another project of our church is to raise money to buy passports for the children whose parents are being deported, so that if the parents find a safe place to live, their children can be reunited with them. I'm not good at quoting scripture by chapter and verse, but there is a lot in the Bible about welcoming strangers and helping the persecuted, including prisoners. My favorite of these is Matthew 25:35-40. Those are the words of Jesus. If the face of such terrible injustice, we must act.  We can't leave it to 'someone else.'"

So the ladies of The United Churches of Olympia will continue to commit their second Sundays of the month to sitting and showing love… for the near future.