In a warm up to General Synod, Wisconsin Conference becomes 'Immigrant Welcoming' with an overwhelming vote 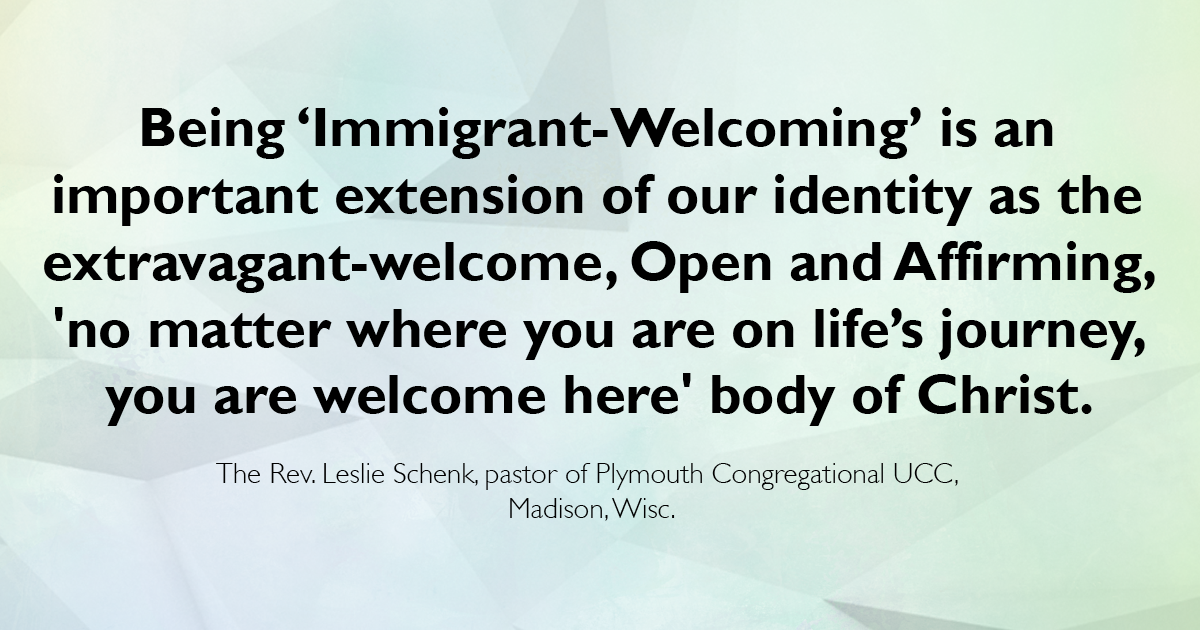 Congregations of the Wisconsin Conference United Church of Christ, which believe that publicly proclaiming love for their neighbors aligns with their mission, vision and values, overwhelmingly passed a resolution on June 10, becoming an Immigrant Welcoming Conference.

"Creating initiatives for welcoming the stranger in our time is critical in a political environment when fear and misunderstanding causes divisiveness and confusion over life and death matters facing refugees, undocumented immigrants, and even our own citizens who practice the Muslim faith," said the Rev. Tanya Sadagopan, pastor of Janesville UCC First Congregational Church. "These 'others' have become the scapegoats for our own frustrations. This is not right. Banning Muslims, reducing the number of refugees we will welcome, and blindly deporting those who have been living and working peaceably in our country is against our calling as Christians. We are called to love our neighbor and seek justice for the oppressed."

The conference began investigating the idea in November 2014, in a conversation about the circumstances immigrants and refugees are facing in this country. A group of lay leaders and clergy formed the Immigration Working Group (IWG) to stay informed on current issues affecting immigrants, refugees and asylum-seekers, to share information and resources with congregations, and to encourage a faith-filled response. They learned the Minnesota Conference was in the process of becoming Immigrant Welcoming and decided to join the movement, initiating a year of discernment and study during its annual meeting in 2016.

"We feel that being an Immigrant Welcoming congregation, Conference, and denomination is an important extension of our identity as the extravagant welcome, Open and Affirming, 'no matter where you are on life's journey, you are welcome here' body of Christ," said the Rev. Leslie Schenk, pastor of Plymouth Congregational UCC in Madison. "We see our mission and ministry efforts to help our immigrant and refugee neighbors as an embodiment of the Great Commandment, and of the prophetic call to 'do justice, love kindness, and walk humbly with God.'"

The resolution in Wisconsin required that 66 congregations study the issue of immigration in order for a vote to be taken at the 2017 annual meeting. 80 churches got involved, with four voting to become Immigrant Welcoming Congregations and more than 30 congregations becoming actively engaged in resettling immigrants, refugees or asylum-seekers or providing support to those doing that work.

The people of Janesville UCC already have three initiatives in process, working with community leaders to be trained and ready to resettle refugees in Janesville; providing educational opportunities for members of churches and communities on issues of faith and immigration including an Immigration & Faith Panel Discussion this fall; and implementing a "Radical Hospitality Project" that is offering micro grants to immigrant high school students who have little resources. The church has just approved two micro grants for two immigrant high school students — one a refugee and another an emancipated minor.

Plymouth Congregational decided to take on immigration as a 'strategic mission focus' in 2017-2018 and has already hosted an advocacy workshop for the community, becoming more active with other organizations and ecumenical partners to extend a helping hand, advocating for the rights of immigrants and refugees. The church also takes a monthly special offering that goes to help house and feed Syrians in refugee camps in the Mediterranean region.

"While our resolution was in process, our Board of Directors voted to co-sponsor a resolution being brought to General Synod this summer on becoming an Immigrant Welcoming Church," said Lisa Hart, associate conference minister, and staff person guiding the immigration issue in the Wisconsin Conference. "We are excited about this action and look forward to the work that lies ahead as we work with congregations to help them live into this designation."

"We knew the timing was crucial, leading up to Baltimore, so that was part of or commitment in passing this resolution prior to General Synod," said the Rev. Franz Rigert, conference minister. "What I appreciated most was the way the delegates dealt with an amendment to the original resolution (that overwhelmingly failed). It's purpose was to state that we are (essentially) law abiding citizens — implying there are no situations in which the Church recognizes a higher moral authority. The floor was gracious and appreciating of differing opinions, but unequivocal about our response to the Gospel imperative to be compassionate and welcoming people of God."

"My passion for raising awareness about the situations facing immigrants, and seeking to find ways to respond, grew out of my sabbatical experience on the Arizona/Mexican border at Nogales in January 2014," said Hart. "We were exposed to the realities faced by those desperate enough to risk their lives to cross the desert to enter the United States. It was a life-changing experience…becoming aware of what was really happening at our borders, I knew my faith called me to respond. My work as staff on the two resolutions is one response to that call."

"As the National UCC we have taken the lead on issues of social justice in the past," said Sadagopan. "The time is now for us to use our Christian faith to make it clear where God is calling us to stand — alongside of our immigrant brothers and sisters, because we were once immigrants in this same land and we were welcomed, sheltered, and protected."