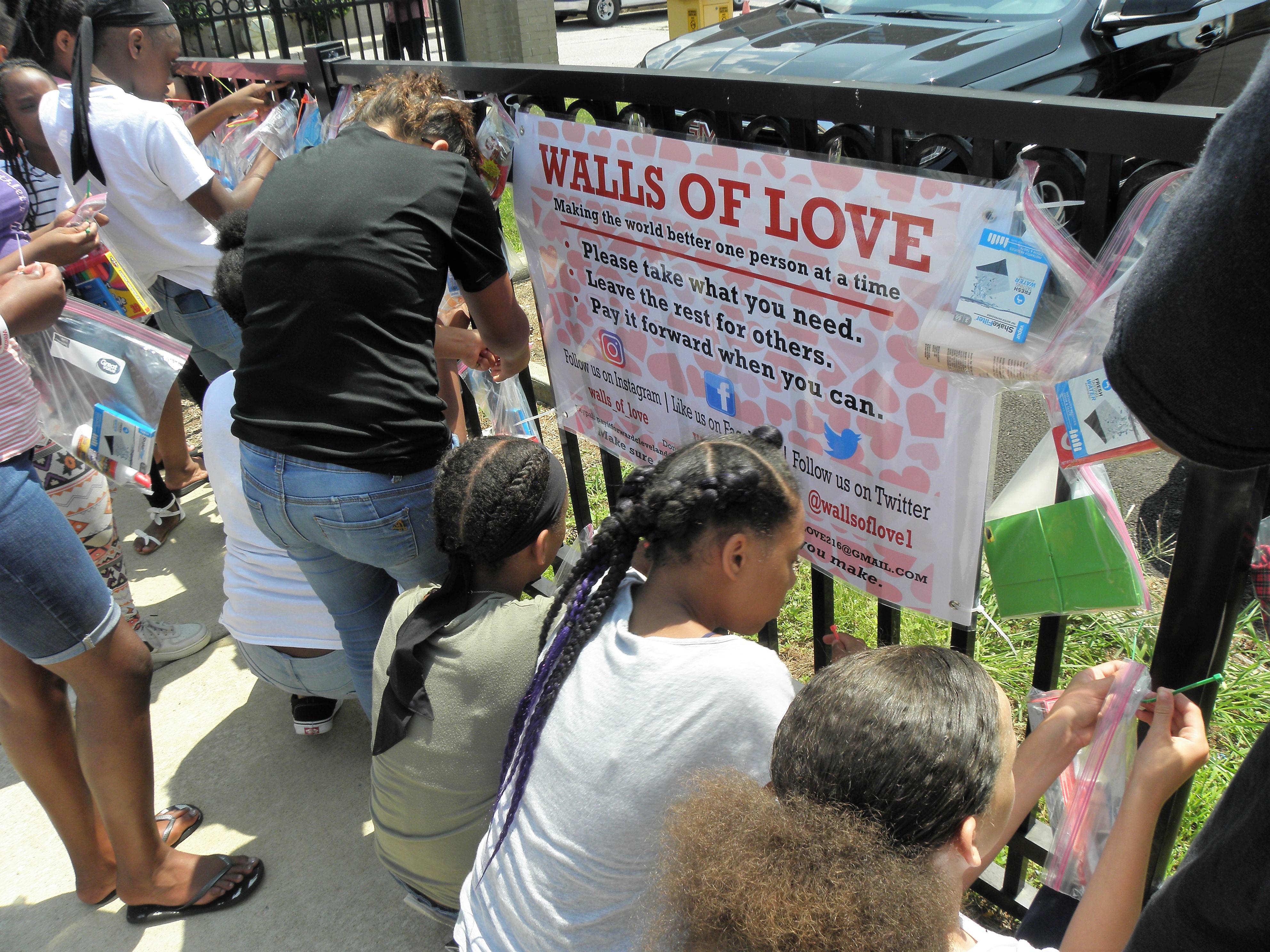 A hundred children crowded around tables in the Great Hall of First Congregational United Church of Christ, bagging up stuff to give away. "This isn't even all of them," said the church's pastor, the Rev. Patrick Nicolino.

Then, as if on cue, here came the rest of them, another couple-dozen kids from activities in classrooms down the hall. They joined the gang preparing assorted personal items: soap, toothpaste, toothbrushes, socks, school supplies, water filters and more. After a pizza lunch, everyone went outside and affixed the laden zip-lock bags to a fence, with a "Walls of Love" sign inviting people in the community to take what they might need, no questions asked.

A TV crew documented their effort, shooting footage for NBC's "Today" show. Other than that national attention, though, this Thursday, June 25, was just another busy summer weekday at the church in downtown Elyria, Ohio – a small city facing rural as well as rust-belt challenges and blessed by multiple gifts. 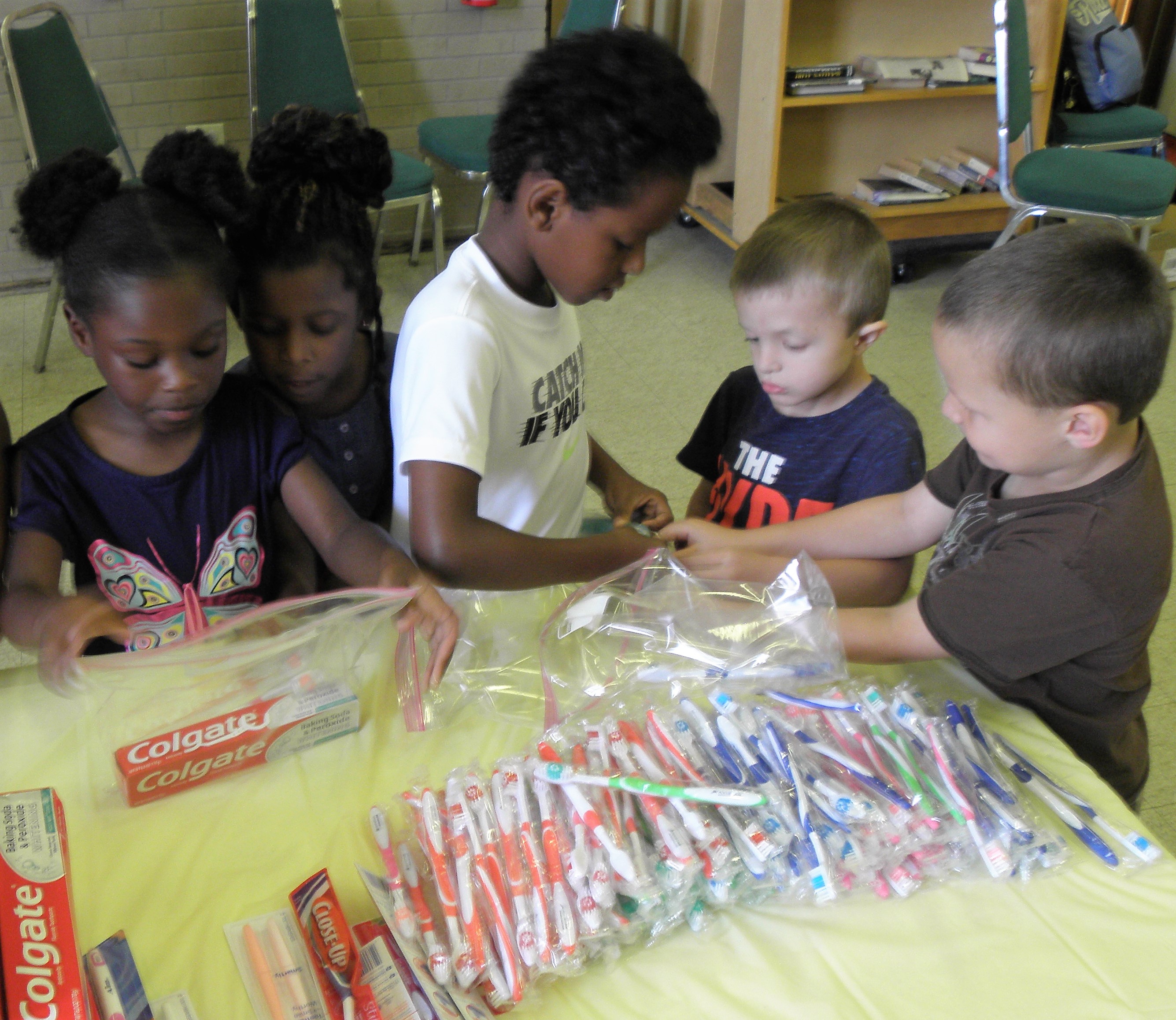 None of it – the crowds, the "Wall," the TV crew – was arranged directly by First Congregational UCC. But the church was thoroughly involved, as host of the event and as a home away from home to the young participants. It shows what's possible when an aging, predominantly white congregation says yes to the gifts and needs of a younger and more diverse community, Nicolino said.

'To feel safe and accepted'

"With all of the groups here, we have a veritable rainbow of diversity – age, race, ethnicity, economic background, orientation," said Nicolino, pastor since 2014 at First Church, where about 800 people now use the building in an average week. Besides the worshiping congregation of 80 to 100 on a Sunday, visitors are there seven days a week for a food pantry, several 12-step recovery programs, Jazzercise, and, during the school year, a weekday preschool.

"Elyria is struggling economically," Nicolino said. "There's incredible poverty. There is homelessness. The opioid epidemic is rampant here, and the congregation opened itself to host Heroin Anonymous. With just all the different populations that are struggling, the church building has become a haven or a safe space for a number of different communities that need someplace to feel safe and accepted and attempt to have a better life. The church has very much opened its doors to meet those needs." 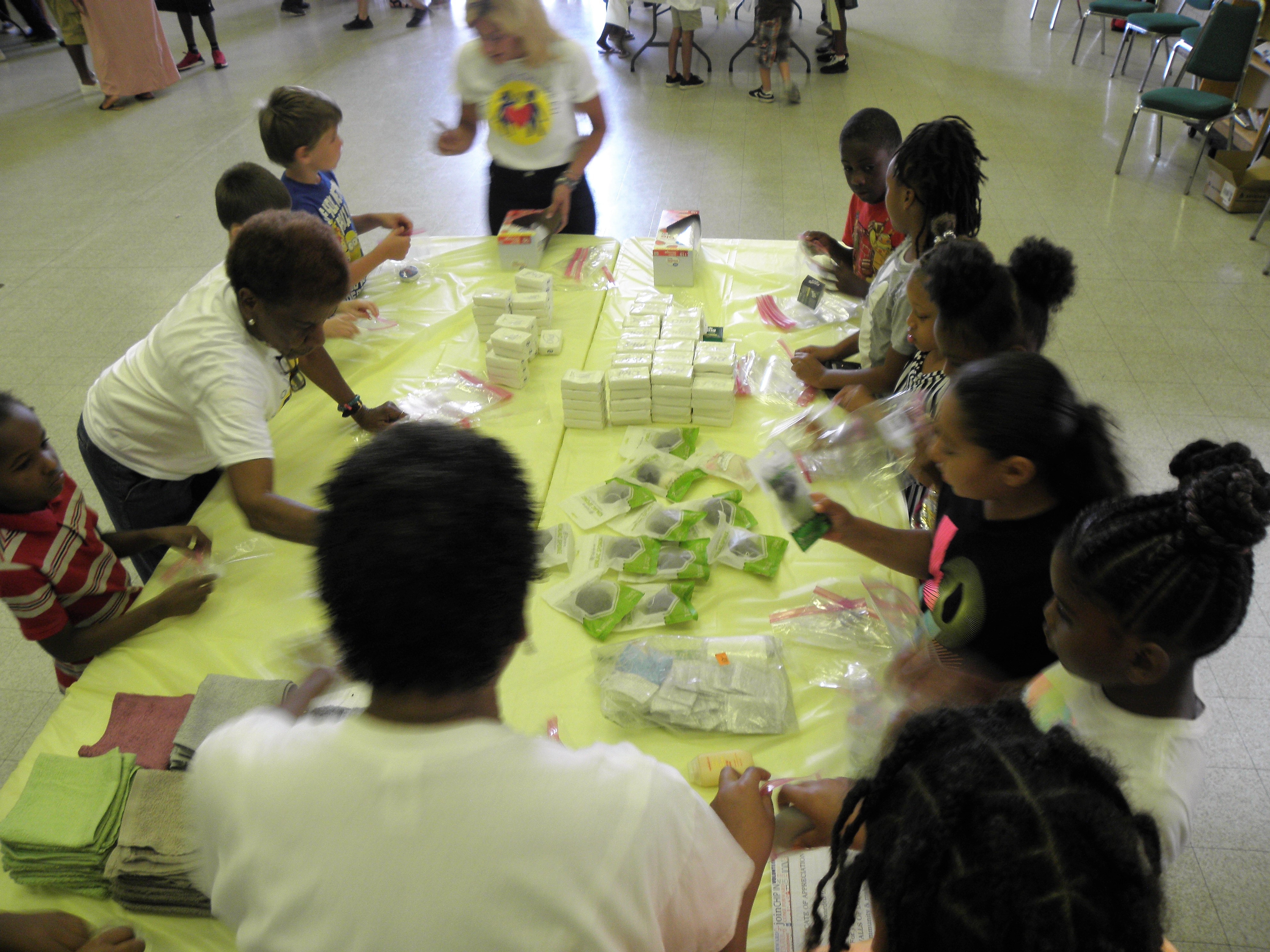 This particular day was a case in point. Here is how it all worked:

'It's your Wall of Love now' 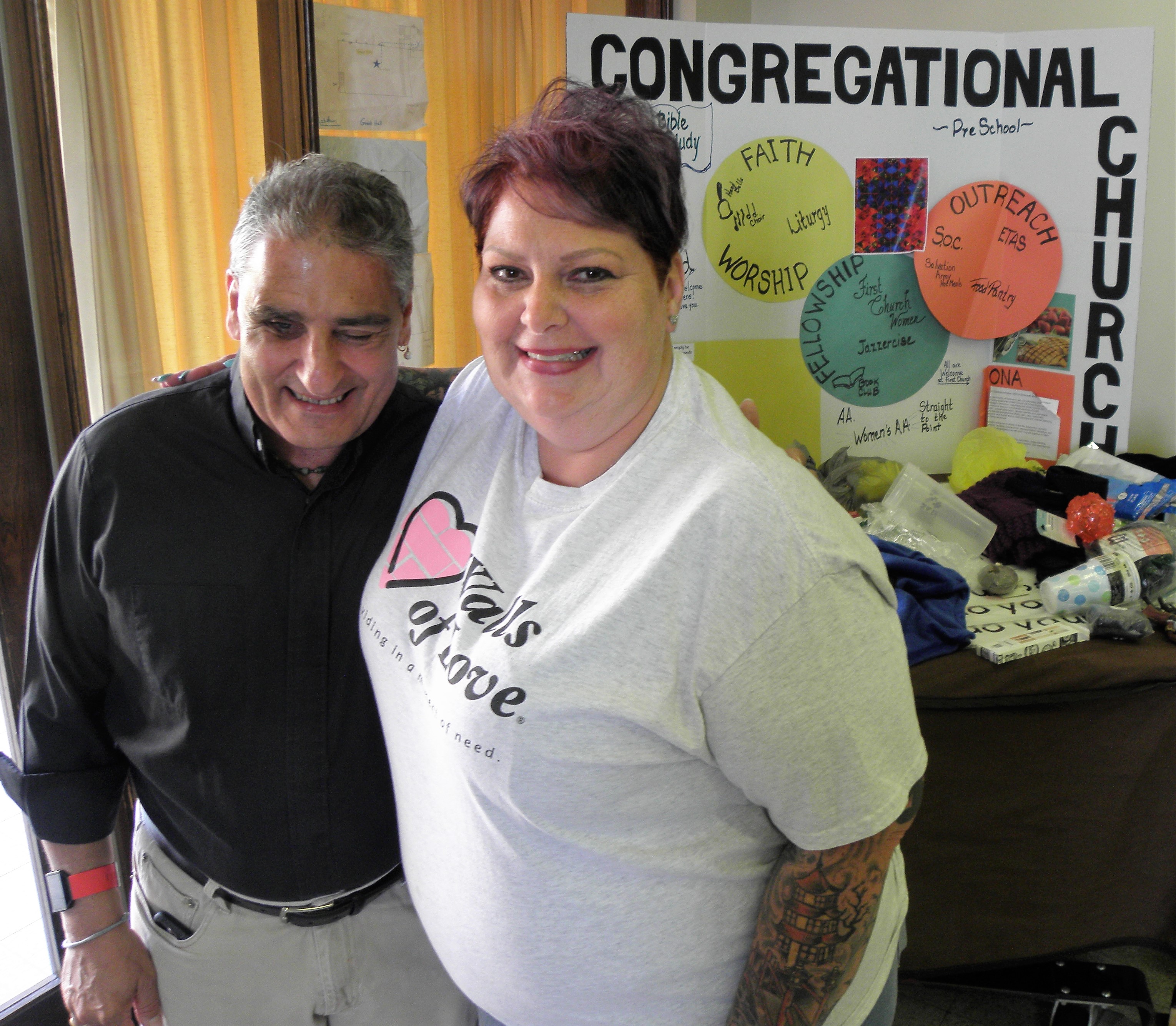 The Wall of Love day included a nuanced pep talk by Jackson to the kids, parents and volunteers in the Great Hall. This Wall – the 150th of its kind, representing about 18,000 people reached – would not be a one-off. "It's your Wall of Love now," she said. Save Our Children and the teen program will be responsible for keeping an eye on it and replenishing it. She said they should speak up if people are just messing with it but be careful not to judge anyone who takes needed items. Those might even be people they know. "You never know what someone is going through," Jackson said.

It will be the church’s responsibility, too. "People can continue to donate items indefinitely," Nicolino said. "What I intend to do with the congregation from time to time is say, 'I was walking by and noticed it doesn’t have much on it. How about for the next couple of weeks we look at what we’re able to put on the fence?'"

In small and large ways like that, the programs that use the building all week are more than just renters or space-sharers with the Sunday congregation. And there are crossovers to the church's own programs.

"We have this incredible youth group on Thursday evenings," Nicolino said. "Maybe three or four or five are members of the congregation, but they bring their friends. We can end up with 100 kids for a lock-in event. On Thursday night, we feed them. Food is extremely important. Then we have maybe four or five minutes of talk about something relevant and connected to the gospel, whether it be immigration issues, homophobia, safe sex – and a little discussion." And then the middle- and high schoolers – now in stocking feet, with their shoes left in a big pile – simply enjoy an hour of fun, often involving "sardines," similar to hide-and-seek. 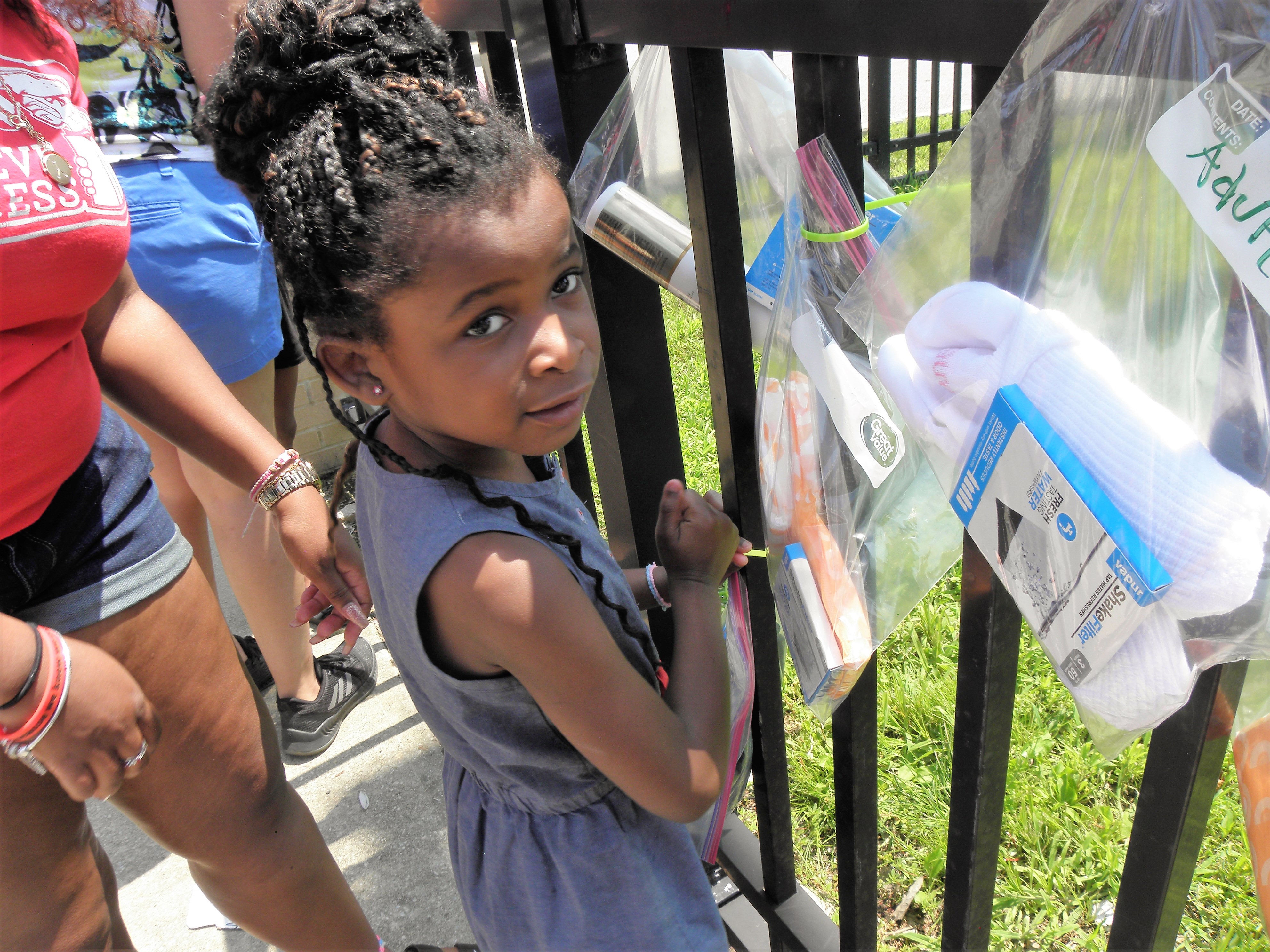 "The youth group is incredibly diverse in race, economics and orientation, and they are so amazingly open to the diversity of one another," Nicolino said. "It's really become a completely judgment-free zone. What with me being completely blind and openly gay, they know that they can ask me anything. I can't see them, so they all look beautiful to me. And they've caught on to that." In them, Nicolino sees "the ongoing hope of humankind."

Openness sometimes results in surprises. If Thursday-night kids show up on Sunday morning, for example, they might kick their shoes off – a sartorial choice unfamiliar to some churchgoers. The pastor thinks adjustments like that are worth the mission.

"My hope is that the congregation sees all the different groups, whether it's our own youth group or Save Our Children or Alcoholics Anonymous, as part of the First Church family," Nicolino said, "and that we are all able to minister to one another and bring the message of God’s unconditional love to one another."