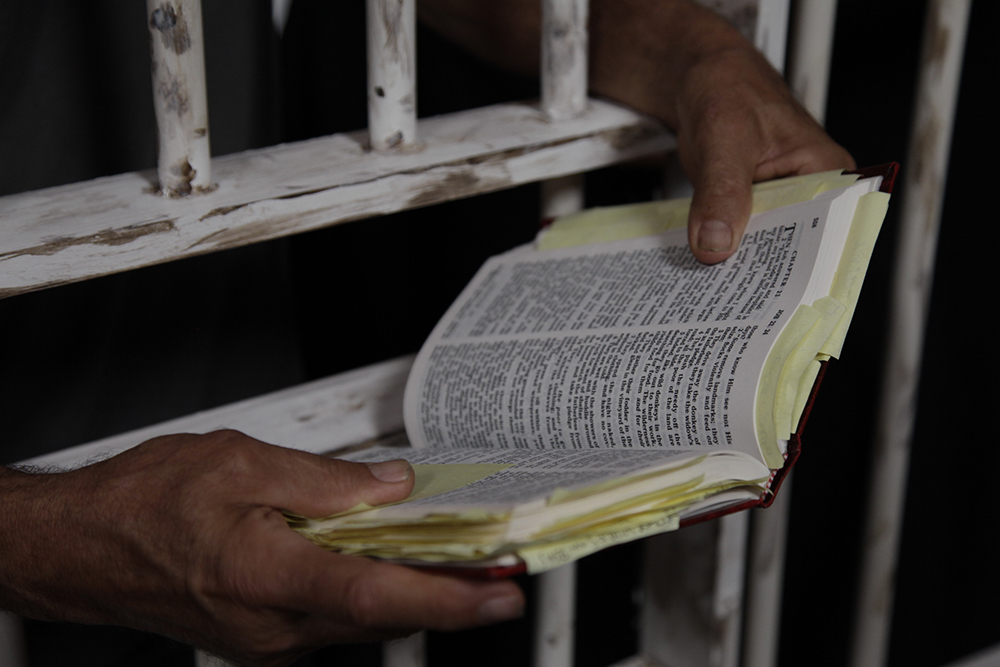 Each year in June, the United Church of Christ invites congregations and people of faith to visit the prisoner. The denomination helps promote Torture Awareness Month with partner organization the National Religious Campaign Against Torture (NRCAT), providing a way for congregations to learn more about torture, bringing this human rights concern into Sunday services and out into local communities.

As part of its commitment to seek out justice, Rock Spring Congregational UCC (Arlington, Va.) will show the movie "Breaking Down the Box" on June 23. The film examines the mental health, racial justice and human rights implications of the systemic use of solitary confinement in U.S. prisons, and is a call to action for faith communities to engage in the growing nationwide movement for alternatives to confinement.

"Jesus said when he was in prison, we visited him, so our faith calls us to stand with people who have been shut in and separated from the communion of Christ. God calls us to connect deeply with one another," said the Rev. Laura Martin, director of mission integration and congregational care at Rock Spring UCC.

"We are focusing on solitary confinement and some of the abuses that negatively impact minorities and people with mental health issues," Martin said. "Particularly in Virginia, we are looking at the use of it at a facility called Red Onion (Southwestern Virginia). Since deciding to do that, we learned about an HBO documentary coming out on Red Onion. We've also spoken with the mother of someone who is in solitary confinement at Red Onion, and invited her to give a mission moment at the church to wake our consciousness on the issue."

Martin said that Rock Spring has long been involved in efforts to raise awareness around solitary confinement and torture tactics. Recently, the congregation hosted a panel discussion in April on parole, which has been abolished in Virginia. "We brought in people to talk about criminal justice issues during that panel, and it made us want to become more involved with solitary confinement awareness," Martin said.

The Rev. Michael Neuroth, UCC international policy advocate, believes that the immoral use of torture around the world and the use of solitary confinement in the U.S. must end.

"On any given day, more than 100,000 people are held in solitary confinement, including juveniles and people with mental illness," Neuroth said. "President Obama made a significant step forward earlier this year when he adopted new policies on confinement that banned the use of solitary for juveniles, but this did not go far enough in ending this practice once and for all."

The issue of solitary confinement falls within the broader issue of mass incarceration, something the UCC is already highlighting this month. Through video witness and social media sharing, denominational leaders hope to involve the larger church community in advocacy around mass incarceration.

"We must raise awareness of our broken criminal justice system not only through Torture Awareness Month, but also through efforts such as our own UCC 'Faith Beyond Bars' campaign this month that highlights the need to address the injustices associated with mass incarceration in this nation," Neuroth said. "The guiding passage for Faith Beyond Bars offers the call for us to connect the dots and see the common humanity in those tortured and imprisoned: 'Remember those who are in prison, as though you were in prison with them; those who are being tortured, as though you yourselves were being tortured.' (Hebrews 13:3)"

Quan Williams, UCC domestic policy advocate, says that medical literature is clear about the psychological damage caused by solitary confinement. "Solitary confinement obliterates a person's ability to reason and if young offenders, or any offenders for that matter, are to have good opportunities to readjust and reenter society as law abiding citizens we can't allow it," Williams adds. "One of the several provisions that make the Sentencing Reform and Corrections Act the best criminal justice reform bill on the table is that it prohibits juvenile solitary confinement."

Said Neuroth, "The solitary exhibit clearly illustrates the case made by NRCAT, and faith and human rights organizations, that solitary confinement constitutes psychological torture and must be banned."