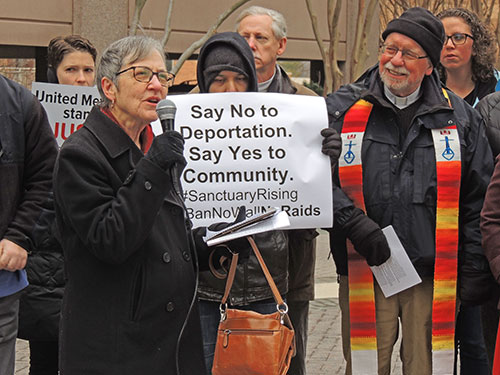 Members of Wellspring UCC in Virginia spoke out on Friday, Feb. 17, against raids U.S. Immigration and Customs Enforcement (ICE) agents conducted outside a church-run hypothermia shelter in Alexandria,Va. last week.

On Wednesday, Feb. 8, ICE agents surrounded and detained a group of homeless men, some of whom had legal residency, as they left the overnight shelter run by a local United Methodist Church. ICE refused to provide the names of all detainees, but finally after a week released one man who provided information about the raid. Immigration attorney Nicholas Marritz of Legal Aid Justice Center asked ICE to release names of the other detainees so that he can provide defense.

Speakers at the Friday morning demonstration included Jim Wallis of Sojourners and the Rev. Keary Kincannon, pastor of Rising Hope Mission Church which hosted the shelter. The group challenged the raid's clear threat to religious freedom. Congregations throughout the U.S. provide informal sanctuary and opportunities for immigrants and others, and the demonstrators say ICE actions are a threat to this mission.

Wallis promised that Christians will not be silent and will challenge this threat to religious liberty. 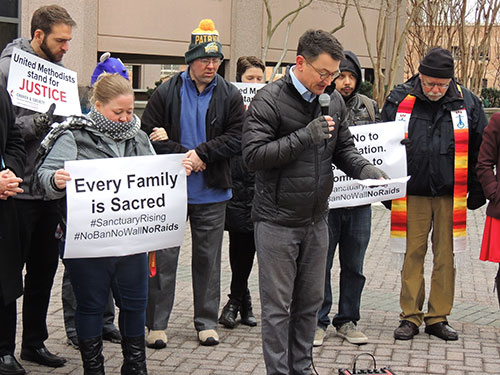 Kincannon said that his United Methodist mission church primarily serves the homeless and the most vulnerable. "They were heading out to their jobs or to look for work, and it is offensive that ICE targeted them just as they left church property."

The Rev. Jerrold Foltz, pastor emeritus of Wellspring UCC, said that a strength of Fairfax County is its diversity, and until now, our immigrants could live in security and make strong contributions. "We can't let ICE destroy our community."

Jerrold Foltz also volunteers at Centreville Immigration Forum(CIF), which operates a 5 year-old day labor center that serves a large immigrant community. The Center receives no government funding. It is the result of a 10-year effort begun by Wellspring UCC and joined by many community partners, to build a place of dignity and opportunity for new immigrants. UCC Neighbors in Need funds provided two grants to support educational projects at the Labor Center.

Volunteers and supporters of the project come from many faith communities, and the project serves nearly 900 immigrants from Central America, Africa, and the Middle East, as well as US citizens in need of temporary labor.