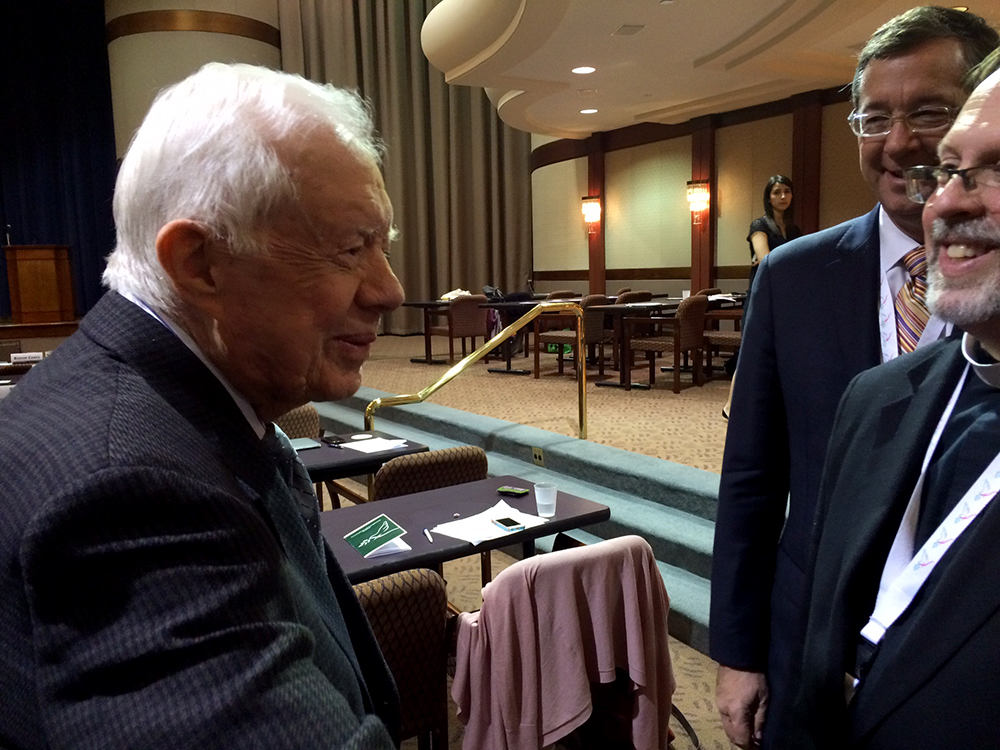 That sentiment — about Palestinians and Israelis from Christian, Muslim and Jewish faiths sharing the city of Jerusalem — was shared and repeated at a historic summit assembling the heads of several U.S. and Palestinian churches, church organizations and civil sector leaders.

In all, leaders of 24 churches — including the United Church of Christ — gathered for two days of prayer and to discuss the ethical urgency for a just peace in Palestine-Israel, to express ecumenical unity in action towards a lasting political solution to the Israeli occupation, and to strengthen the Christian presence in the Holy Land.

"Global Ministries is blessed to have close collaborative relationships with many of the bodies that were represented," said the Rev. James Moos, co-executive of Global Ministries, the shared mission of the United Church of Christ and the Christian Church (Disciples of Christ). "President [Jimmy] Carter challenged us directly to work for justice, and we will."

"All those present agreed to the importance of continuing deliberate collaboration with urgency and energy," said Peter Makari, Global Ministries executive for the Middle East and Europe. "The fact that it happened is historic."

The unprecedented summit, held at the Jimmy Carter Center April 19 and 20, brings together representatives from Protestant, Orthodox, and Catholic churches from both the United States and Israeli-Palestine.

"We feel this is one of the most important meetings at the Carter Center this year," said President Carter, who addressed the conference.

Carter's interest in Middle East peace is well known. As president he helped broker the Camp David Accords in 1978 that saw Israel return control of the Sinai Peninsula to Egypt and develop a peace partnership between the countries. Carter had hoped the accords would lead to Palestinian statehood. It never materialized, and next year will be the 50th since Israel occupied the West Bank and Gaza.

"We need a very strong tie with Palestinian Christians and Muslims, and with churches in the United States," said Carter. The center that bears his name has full-time offices in East Jerusalem, Ramallah and in the Gaza strip. Because of its work, Carter was awarded the 2002 Nobel Peace Prize.

After two days of discussions, the participants outlined ways in which they can develop a more effective advocacy effort in the United States to keep alive the prospects of a two-state solution — based on the pre-1967 borders — and cease the expansion of Israeli settlements in the occupied territories. Among the suggested actions: pilgrimages to the Palestinian territories for clergy, lay leaders and seminarians to understand the nature of the conflict, and coordinating the efforts of churches in both regions.

"I fully agree with it, and I hope and believe this will have some effect," Carter said. "But it will not have any effect unless the churches and members here work on them jointly, enthusiastically and aggressively."