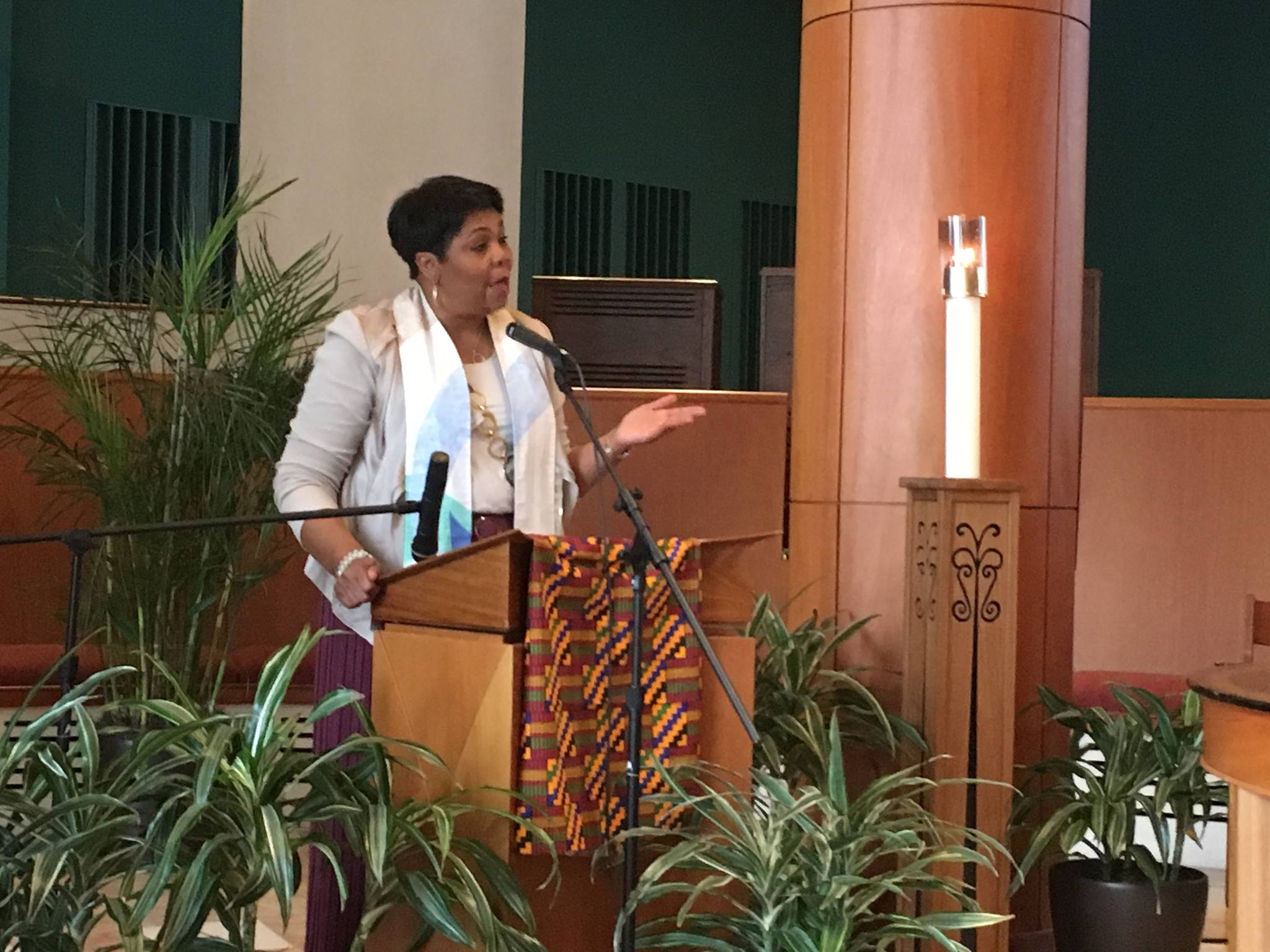 Ash Wednesday and Black History Month are both opportunities for reclamation. While they can seem unrelated, United Church of Christ executive the Rev. Traci Blackmon believes both events are an important part of envisioning a God of inclusion.

"The story," Blackmon said, "belongs to all of us."

Blackmon, acting team leader of Justice and Witness Ministries, led the Ash Wednesday worship service at Amistad Chapel UCC on Feb. 10., taking time with members of the national staff and a handful of visitors to observe Black History Month, and to begin the journey of Lent. It was her first time preaching at the Amistad Chapel — the street-level church inside the denomination’s national offices — as a staff member, though she did preach there during General Synod 30 in June 2015.

Black History Month, which began as Black History Week, founded in 1926 by historian Carter G. Woodson with the intent that by highlighting a week of African American history, the culture would shift to include black history as part of American history. It was observed the second week of February, because that week marked the birthdays of Frederick Douglass and Abraham Lincoln — birthdays celebrated in the black community since the late 19th century.

Black History Week expanded to a full month in 1976 under President Gerald Ford. As Blackmon pointed out, "There are those who think it is pigeonholed into the shortest, coldest month of the year," but those are misnomers.

"My task today is to preach the gospel that speaks to that history," Blackmon said.

To begin claiming both Black History Month and Ash Wednesday, Blackmon shared a story from Genesis on the Garden of Eden, and the four rivers that flowed from it. Two of the rivers, the Tigres and Euphrates, are located in modern-day Turkey, Syria and Iraq. The other two rivers (named Pison and Gihon), Blackmon said, are though to be the Blue Nile and White Nile rivers in northeast Africa, running through Ethiopia, Sudan, and Egypt.

"There is less mention of African roots in the Bible," Blackmon said. "Ultimately, this passage [from Genesis] clearly articulates Africa as the center of the Biblical world. I don’t share this to conflate one race as being above another. I share this so we can understand we are in this together."

"I am convinced one of the grave mistakes we make is that we point out our differences in effort to unify," she continued. "The story shows we did not begin as different. We began as the same. If we begin with the unity that brings us to the same origin, then we can celebrate the ways God makes us diverse."

Returning to the topic of Ash Wednesday, Blackmon concluded her message describing the mixture of ashes that are distributed. Ash is mixed with oil to make it stick when applied. She reminded those gathered that oil has been used to heal and anoint in Biblical times, and that a God of inclusion wants to heal all people. "Through ash and oil," she said, "we are reminded both of loss and light, of mourning and healing, of death and the promise of resurrection, journeying to both Good Friday and Easter Sunday."