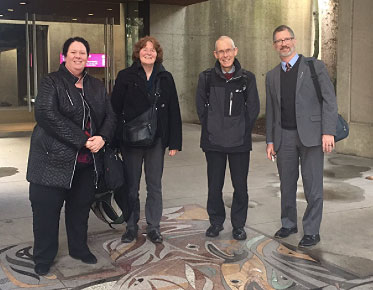 A spontaneous Skype call and the Holy Spirit brought the leaders of four progressive Christian churches from around the world together for a serious discussion on collaboration.

"We were all struck by how similar our contexts are," said Dorhauer. "We are all experiencing many of the same dynamics, and for this reason found the sharing of resources, ideas, insights, and innovations with each other well worth the time we took to assemble from across the globe."

The group, which decided to meet face to face for the first, but not the last time, arranged the two-day discussion last year after the United Church of Christ and the United Church of Canada leaders, who had just entered into a Full Communion Agreement, Skyped the general secretaries of the United Churches of Australia and Great Britain to talk about what it would look like for the globe's United Churches to engage in meaningful conversation about becoming a part of a larger movement for progressive Christianity, and to build a deeper commitment to unifying the Body of Christ. That promising conversation opened the doors to this week's meeting…and a series of possibilities.

"I think the most interesting conversation we had was in response to the question about the role and identity of progressive Christianity," said Dorhauer. "UC Canada is wrestling with the question of whether an openly atheist pastor can continue to serve in authorized ministry. We talked for hours about this, and realized that as challenging as that decision is, and recognizing that how they answer the question will define and shape their denomination's ethos for a long time – it will also have a deep impact on the other partners in the room. Every communion there talked about how our pastors and leaders were aware of this matter, and were calling us to weigh in on it. What Canada does with this will have ripple effects in each of our respective communions."

The church leaders also discussed truth and reconciliation, how to better relate to First Nations peoples, how to support clergy in our changing times, how to deal with questions of pastoral authorization in changing cultures. Dorhauer, mentioning the UCC AM21 meeting now underway in San Antonio, which is working on a complete overhaul of the denomination's Manual on Ministry, noted that it was helpful to hear that other churches are wrestling with the same matters.

Another substantive conversation, which Dorhauer noted took up a good deal of time, concerned the refugee resettlement question. The four leaders shared their national narrative, how each country is responding to the influx of immigrant peoples. "We also talked about what our churches were doing – and this was a rich conversation," he said. "We all learned something valuable listening to each other. I have already forwarded to each of them the Immigrant Welcoming Church Tool Kit that Noel Anderson developed in his work in the Southwest and then with Church World Service. Hearing the stories of churches in each nation using their buildings to house immigrants and refugees was nothing short of inspirational."

The group also talked about finding ways to collaborate on worship resources, liturgical resources, communication pieces, and daily devotionals that may end up saving each denomination time and money while creating new ways of thinking about church relationships.

"The time together with our group of four colleagues this week has been very rich," said Sanders. "Our conversations began at breakfast and continued almost without interruption until the end of dinner. Through our worship and our conversations we found a great sense of shared mission, similar challenges, and stories from the lives of each other's churches that gave inspiration. Having had this time together has allowed us to establish a level of relationship that will open the way for continued connection and collaboration as we each work to enable our churches to offer leadership to share God's love in. The challenging circumstances of our world."

They plan to continue to keep in touch, with monthly emails, video conferences twice a year, and in-person gatherings every two years. And they've forged a special partnership for progressive Christianity.

"Our worship and our table fellowship was the best part," Dorhauer. "We began and ended each day with one of us leading worship. Our time together sharing meals made us all feel like we had known each other forever. We would sit at the table and keep talking, not wanting to leave. A beautiful partnership was built. It was an honor to spend time with these remarkable leaders."