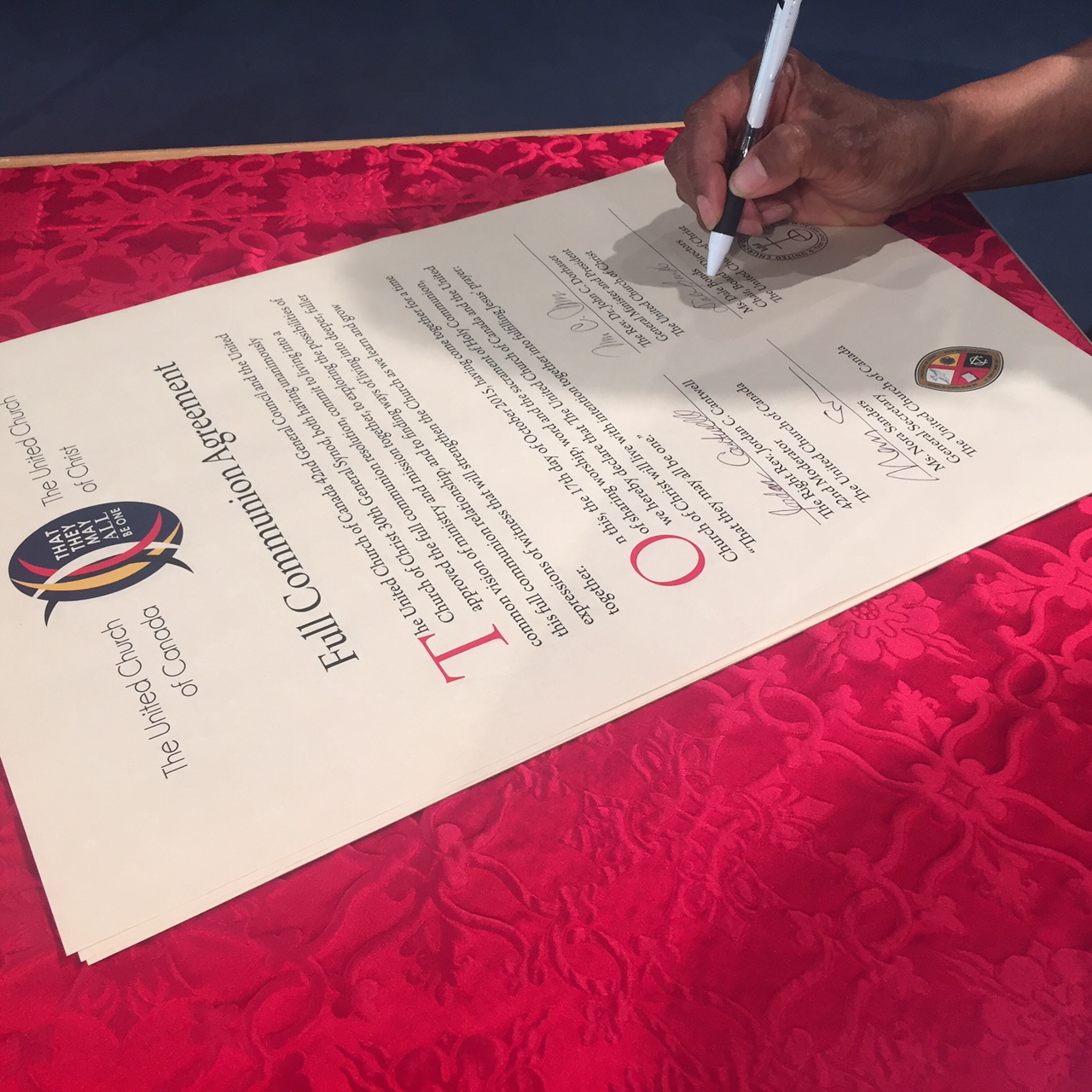 That they may all be one.

Leaders from the United Church of Christ and The United Church of Canada came together to share worship, word and communion, fulfilling Jesus' prayer that "They may all be one" in celebration of their new partnership. The governing bodies of both denominations approved a full communion agreement this summer, formally culminating with a Saturday night Oct. 17 worship service, celebration and document-signing by leaders from both denominations.

Close to 400 people filled the venue, St. Andrew's United Church in Niagara Falls, Ontario, for this historic moment. The shared worship service moved some to tears of joy, and it moved all to sing from their hearts.

"What we do here is not just a fulfillment of Christ's prayer, but of our faithfulness to a gospel we know has the power to change the world," said the Rev. John C. Dorhauer, UCC general minister and president. "Let this be our first step in commitment to that gospel."

"We are grateful for the hospitality and fellowship we have experienced on the journey here," said Nora Sanders, general secretary of The United Church of Canada. "This celebration is open to all."

After the signatures, Dorhauer and Cantwell exchanged stoles to remind both churches of their "shared purpose to proclaim the gospel for the mending of the world."

"This is a new step, the next step in a friendship that is blossoming," Cantwell said. "This is our first full communion agreement. What makes this relationship so important is common mission in God's world — to go out in the world and bear witness for God's love for all."

Many UCC attendees came by bus, including more than two dozen people, members of the board of directors, staff and the three national officers, who left Cleveland for Canada just an hour after the board concluded its meeting, to be part of the celebration.

The Rev. Karen Georgia Thompson, UCC ecumenical and interfaith officer, said the partnership expresses "the unity we know exists through Christ, and affirms our identity as disciples of Jesus."

Rev. Michael Blair, executive minister for The United Church of Canada, said, "We are not alone in this journey. We gather with the family of uniting and united churches around the world. Though this agreement, we [hope to] deepen our faith as followers of Christ."

The Rt. Rev. Mark MacDonald delivered the sermon at the service. MacDonald, a bishop in the Anglican Church of Canada and the North American president of the World Council of Churches, offered his congratulations to both denominations. "But this is just a step along the way," he said, "and I hope we can journey together where God is calling us to be."

"This is really important, and especially important to me," MacDonald added. "I would like the Falls to be the image for this day, to capture your mind and your heart, and to see it as a place of migration [among First Nations people]."

At the conclusion of communion, Cantwell declared in the farewell message that it was "time to go from here and put these commitments and this agreement into action."

"I am so glad that I was able to be here," Dorhauer said. "It is time for our co-missioning, and to go where God's spirit sends us, in one accord."

Watch a video of the entire service, courtesy of The United Church of Canada.