UCC takes aim at gun violence in May

The United Church of Christ has long advocated for sensible, responsible policies to end gun violence. More than 20 years ago, in July of 1995, the General Synod passed three resolutions dealing with guns and violence in our society. This May, the church is amplifying the call for change, encouraging advocacy around stricter gun laws with a sharable video message from one of our congregations forever changed by a shooter with a gun.  A new 5-part Bible study will also be introduced.

The Rev. Matthew Crebbin, senior minister of Newtown (Conn.) Congregational UCC, and his community experienced heartbreak and grief after 20 children and six educators at Sandy Hook Elementary School were lost to "a horrific event of gun violence" in one of the worst mass shootings in our nation’s history.

"For people of faith, this is not a Second Amendment issue; it is a Second Commandment crisis," said Crebbin. "The near infatuation with the gun is moving dangerously close to becoming a full-blown worship of a false idol. We live in a time when common sense gun safety legislation –– like the strengthening of our national background check system –– cannot pass Congress, even though nearly 90 percent of our citizens support such a law. 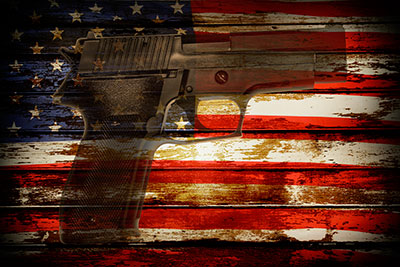 "We have allowed fear and apathy to rule when it comes to guns in America. We have allowed the status quo to become perfectly acceptable. As a result, every year 30,000 precious lives –– each one created in God’s image –– are added to a tally that is already far too high."

"Gun violence is a plague on our society and a modern form of idolatry," said the Rev. James Moos, UCC national officer and executive minister of Wider Church Ministries. "In this initiative, we will show the human cost of the violence, and provide resources for understanding and action based upon God's desire that all experience fullness of life."

"We simply cannot accept the toll of gun violence as the norm in our nation. This is a moral imperative," said Sandy Sorensen, director of Justice and Witness’ Washington, D.C., office. "How can we, as people of faith, be silent as gun violence takes the lives of children, women and men, at a rate exceeding the death toll of all wars ever fought by the United States? When children must be equipped with bulletproof backpacks to go to school, what do we have to say to this? We cannot find comfort in saying ‘peace, peace’ without committing to the hard work that makes for peace. Engaging in the sometimes difficult dialogue around gun violence is one important step in the process." 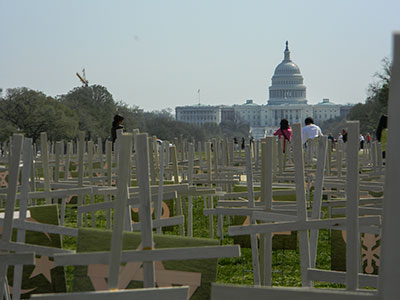 The initiative also looks ahead, urging churches across the UCC to participate in the Gun Violence Prevention Sabbath sponsored by Faiths United to Prevent Gun Violence, scheduled for the weekend of Dec. 14-18.

"The context of gun violence is complex –– no one piece of legislation can address it. But we know that gun violence is preventable," said Sorensen. "We have the means to reduce gun violence. What we seem not to have is the political will to take action, on measures such as strengthening background checks on gun purchases, requiring child safety locks and implementing technology that can prevent guns from being used in violent acts.

"Our culture has a heavy investment in death; isn’t it time we invested in life and hope? This is our faith call."