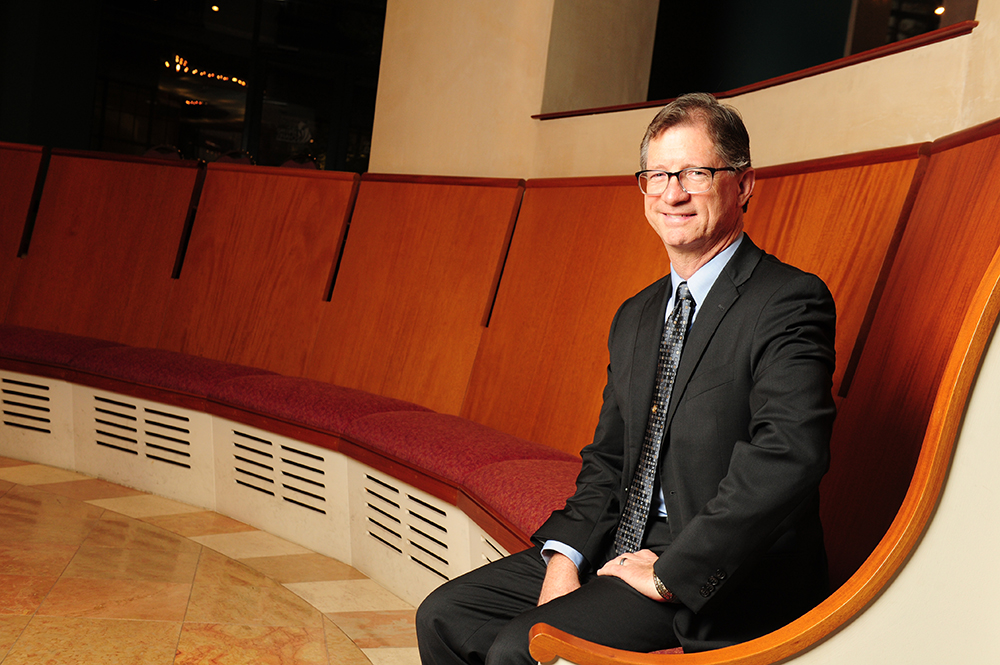 Three locations. Three preachers at each service. An extravagant welcome to all who would like to attend.

The Rev. John C. Dorhauer will be formally installed as the United Church of Christ's ninth general minister and president during a three-city worship service in mid-April. The three events, scheduled on April 15 in New York City, April 16 in Chicago and April 17 in Seattle, will include a trio of UCC pastors and leaders who have been invited to offer three brief "vision statements" at each worship location.

But as organizers point out, these three services are not just about the installation of one person; rather they are planned as a pivotal moment for the future and mission of the denomination. That's why everyone in the wider church is welcome to attend any of the three events or watch the proceedings online.

Installation planners also point out that the church is not centered in Cleveland where the national setting is located. "We are called to serve the wider setting," Dorhauer said. "Having this in three cities represents something symbolic — that we are all in this together — and allows us to open this amazing moment up to more people."

Since his election, Dorhauer has often shared his belief that the Holy Spirit envisions a future in which the UCC matters. He hopes his installation helps illuminate that vision. 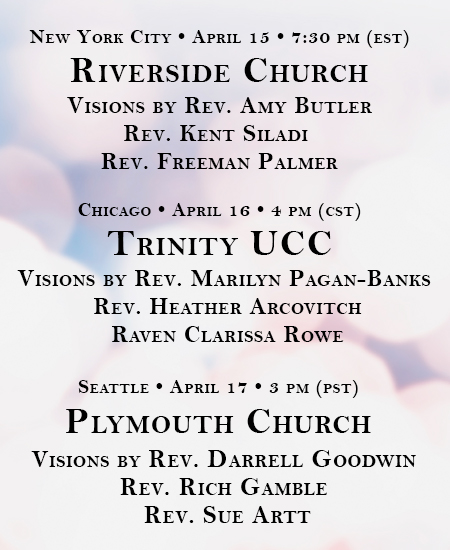 "One of the things about the Installation I am most excited about is this: instead of one preacher, we have nine voices sharing with us their vision of what a renewed and vital mission for the United Church of Christ looks like," Dorhauer said. "Each of them sees something different. We will leave this experience with a variety of voices having lifted up for us an inspiring, hopeful, and challenging vision. That has me very excited."

The Riverside Church in Manhattan, New York City, Trinity United Church of Christ on Chicago's South Side, and Plymouth Church United Church of Christ in downtown Seattle are the host congregations on April 15, 16 and 17. All three services will feature music by Mark A. Miller, the minister of music at Christ Church (a UCC and American Baptist Church) in Summit, N.J., who was commissioned for the occasion.

Each service will welcome ecumenical and interfaith guests from communion churches — including the Rev. Sharon Watkins, general minister and president of the Christian Church (Disciples of Christ) — and other Protestant denominations in the United States.

"An extravagant welcome and invitation has been extended to our ecumenical and interfaith partners to join us, to which we have had a very positive response," said Cheryl Joseph Williams, UCC chief strategic officer. "Some of our ecumenical partners will have active participant roles in the installation weekend, and all have been invited to bring greetings within the context of the services."

The Rev. Sue Blain, UCC curator for worship and liturgical arts, is part of the installation service planning team. She explained that worship is being planned as part of a "progressive installation," with each event meant to complement the others.

"It emerged out of conversations that John had with members of the UCC Board, and he sought from them wisdom on how to do this installation — how to conceive it and engage lots of people. Out of that conversation, this idea of a progressive service emerged," Blain said. "We will begin the celebration with greetings and welcoming guests at each location, covenanting and laying on of hands in New York and Chicago. We'll bring in communion offerings in New York with bread, and in Chicago with juice. In Seattle, we will bring the process to a formal conclusion, where people can partake in communion."

Dorhauer and his predecessor, former general minister and president the Rev. Geoffrey Black, will lead communion.

"Rather than envisioning three separate services in three locations, imagine that this weekend lifts up a single three-part continuing installation service celebrated in three regional locations across the country, a service that begins in New York, continues in Chicago, and culminates in Seattle," said Williams. "This is symbolic of a belief in God's continuing testament and affords a fresh invitation for the UCC to celebrate and live out a united and uniting UCC — a people of possibility."

Each service is based on the UCC Book of Worship, but there are some aspects of the events that have been expanded to include people in attendance so they also can commit to a new moment within the life of the church.

"When people lay their hands on John and on each other, it forms a large circle," Blain said. "In that moment we are asking people to pray not just for John, but for all of us gathered."

All three services will be streamed live on the UCC website.

“It’s a symbolic value suggesting that we are now a part of a technological world," Dorhauer said, "and we will use those gifts to broaden our impact; and practically making this moment something we can all own and participate in."