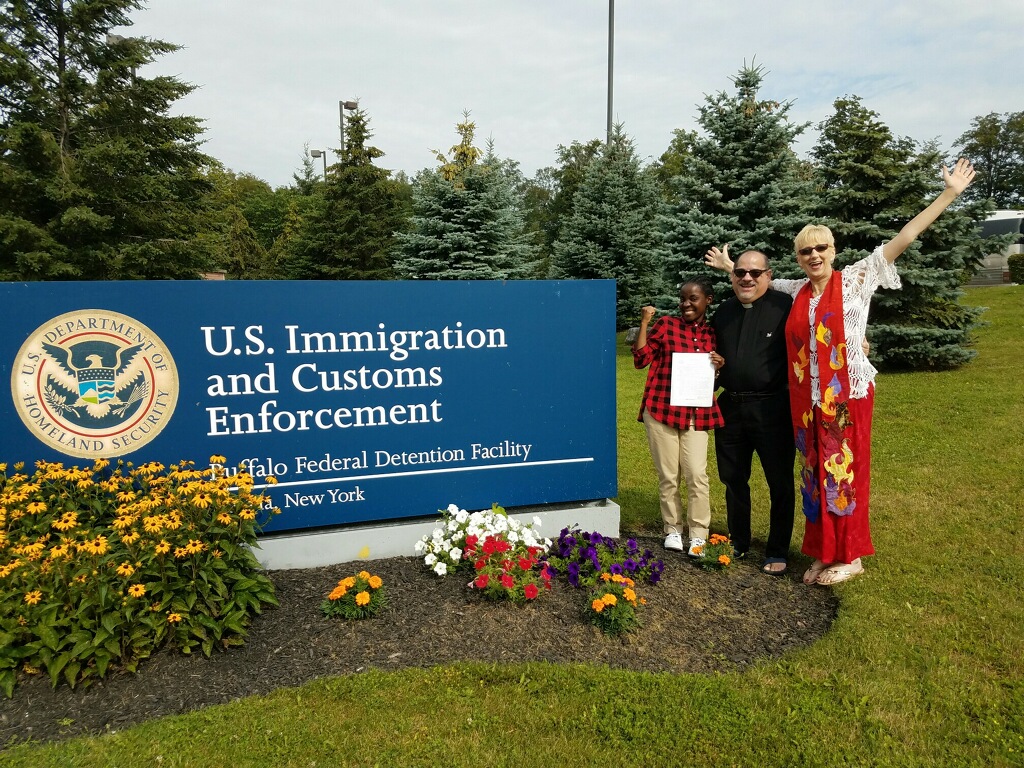 A 22 year old lesbian from Africa, escaping persecution and brutality at the hands of her father and her husband, was supported by her faith family at a Batavia, N.Y. federal detention center on Thursday as she faced an immigration judge, who finally granted her asylum in the United States.

Two United Church of Christ pastors stood with 'Jane' and her attorney during her appeals hearing on July 20 — one who accompanied the young woman from her adopted home in Massachusetts and the LGBT asylum support ministry that took her in, and the other from a sanctuary congregation in Buffalo who offered the pair hospitality and a place to stay in New York. Love, relief and joy were all very evident after the hearing.

"Jane (a Muslim) believes that it was the prayers of the UCC and her church friends that won the day," said the Rev. Judy Hanlon, pastor of Hadwen Park Congregational Church UCC in Worcester, Mass., and coordinator of the LGBT Asylum Support Task Force, a ministry started 10 years ago by the church. "I can live on the holy energy of watching her face when the judge said, 'Thus, I will grant asylum for...' You had to be there. Attorney crying, me crying, Jane limp with a lifetime of relief offered in one brief sentence."

And from today forward, life for this young woman changes remarkably from all she has previously known.

"Jane, granted a visa to the U.S. in 2015, was escaping a horrific reality at home," said Hanlon. "Her father, who was trying to kill her because of her sexual orientation, forced her at 14 to marry a 40-year old man with many wives after he discovered she was a lesbian. She was beaten, ostracized and raped by her husband. She lost two children because of those beatings."

She was able to leave all that behind a few years ago, coming to the U.S. in November 2015 on a business visa. But Jane ran into trouble when she tried to leave the country to see her brother.

"Jane has a brother in Canada who fully supports her," Hanlon said. "So when she finally was able to get out of her country and to America, the young woman got off the plane in New York, and got on a bus to go see her brother across the border, unaware that it is illegal to cross into another country when you are in the U.S. on a visa."

The young refugee was arrested and placed in detention in New York, where she remained for six months. Pastor Judy said she first learned about Jane when she answered an unusual call on her cell phone from an unfamiliar man in Canada who told her he was given her private number and had to call to get his sister help. Somehow Jane's brother in Canada found out about the LGBT Asylum Task Force in Massachusetts, the Hadwen Park Congregational Church program that has assisted more than 150 LGBT asylum seekers since 2007.

Once Jane's brother explained the situation to Hanlon, the minister went online to find a pro-bono LGBT immigration attorney in New York. The counselor and Hanlon prepared a case for the young Muslim woman, jailed for months, and charged with crime in a strange country. In 2016 in Buffalo N.Y., when she appeared before the same federal judge she faced Thursday, she was denied asylum and sent back to detention because he didn't believe she was a lesbian.

"Eventually some saints at Hadwen Park Congregational Church, raised the bond of $7,500 so that Jane could be released to the care of the LGBT Asylum Task Force in Worcester," Hanlon said. "For the last year, Jane has been living in a beautiful apartment, and given $400 to live on each month."

Since 2007 the Hadwen Park ministry, which supports asylum seekers until they get a work permit and can make their own way, has been able to help 50 people who have been granted asylum and rejoiced with eight who have become U.S. citizens. The Task Force is currently supporting 16 asylum seekers in the Worcester area, including Jane, who will soon be celebrating her victory with her Massachusetts community.

"She has friends, a girlfriend, participates in speaking events for the Task Force, and has health care including a therapist," said Hanlon. "She is healing."

Two other UCC pastors also helped make that possible. In 2016, the Rev. Barbara Hulsing, who was pastoring Good Shepherd Community of Faith in South Buffalo, responded to a call to Hanlon, a colleague she never met, and picked Jane up when she was released from detention, took her home so she would have a place to stay the night and put her on the bus to Massachusetts and the LGBT Asylum Task Force. Jane and Hulsing got a chance to get reacquainted this week before her hearing at Pilgrim-St. Luke's & El Nuevo Camino UCC in Buffalo. The pastor of that congregation, the Rev. Justo González, II, offered to host Jane and Hanlon during their stay in New York and accompanied them to face the judge at the detention center, about 45 minutes away.

"Assisting Jane and Pastor Judy with a place to stay, some meals and 'Extravagant Welcome' is what we do," González said. "Doors wide open, people first and all are welcome are part of how we live our ministry. We, as a church, will continue to offer a hand of hope and a space of grace to all who need it."

"We were driving to the hearing and we did NOT speak one word! There was nothing to be said," said Hanlon. "We had written, prayed, analyzed, and comforted each other with words upon words upon words. It wasn't uncomfortable to be so silent; it was as if we knew that we had handed this whole journey off to our higher power, the God of grace and mercy. When we drove home, we chattered like school aged children. We sang Christian worship songs that she loves; we called everyone we both knew. We talked about the joy of a future that God will design."

A great love of neighbor, for this young woman and others like her, brought the three UCC pastors together, bonded by their commitment to build a just world for all.

"I am so happy she got her asylum, and I was near tears when I got the word," said Hulsing. "It's just wonderful!"

"To see the unbelievable joy and tears of gladness flowing from Jane was amazing,' said González. "From fear and trepidation going into the courtroom to walking out with a profound and amazing smile was super cool. A signed legal order granting her asylum was deeply moving for her and an awesome experience to be a part of."

"This is salvation on the ground!  Not a theological concept, a distant atonement, but in the name of God's love and Christ's teaching, this work literally and spiritually SAVES people," said Hanlon. "To be a part of that is an honor. I can't imagine doing anything else, and I am humbled every day by the love of the saints at Hadwen Park and the bond from coast to coast of like-minded, Jesus followers, who say YES in Christ's name."